So we are to the denouement.

Let me say a little prayer.

“God, please let there be people out there that are reading this that know the definition of the term denouement because they have bothered to learn the English language and not because they were sitting around stoned watching “Clerks” last night. Amen.”

“Reflections on the Last Few Days” has what literati might consider a nonlinear time line.

Let me say another prayer.

“God, please let there be people out there that are reading this that know that Quentin Tarantino didn’t invent the nonlinear timeline in the movie “Pulp Fiction”, which isn’t even the first movie he made with a nonlinear timeline. Amen.”

So even though I concluded Part III with my Lenten Study Group on Tuesday night, I am going to move back in time to Tuesday’s lunch. To begin though, we are going to move a week further back then that.

I believe that it was a Wednesday at work. I went to Jesse’s office. Steve was sitting in there. I believe there was some kind of discussion about a particularly nasty customer. Jesse bribed Steve into calling this unhappy customer in exchange for buying him lunch on the morrow. Steve accepted the deal.

What Steve failed to realize is that the deal was struck under false pretenses. Jesse was not going to buy him lunch on the morrow. Nay! Jesse was going to be in the town known as “Mason” on a sales call. Therefore this lunch was rescheduled for an undetermined date in the future.

This worked out for me perfectly. You see Steve is the “Personal Climatologist” that I have yammered about in some of the past few entries. I had also bartered a deal with Steve. He agreed to watch the movie “An Inconvenient Truth” and give me his perspective on the movie. Although Steve’s day job is supporting the pre-eminent practice management software in the business, he has a degree from Iowa State University in meteorology. That makes Steve my go to guy in matters of Climatology.

He would be my go to guy in matters of weather, but frankly discussions about the weather couldn’t bore me more. In fact, if you ever catch me discussing the weather with you I probably find you to be an epically boring person and in reality I’m just counting down the seconds in my head until I can escape your presence.

Let me introduce you to Steve real quick. He is somewhere in the picture below. I hope you can find him. 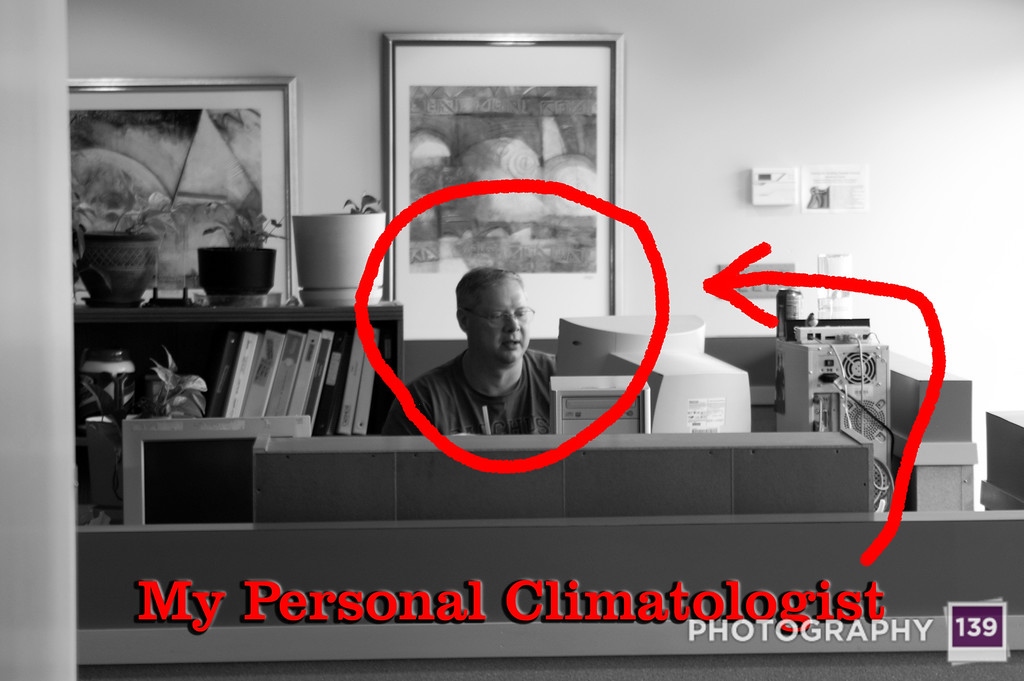 Steve has a background in studying this type of thing, so I am interested in his opinion. Way more than the person who tells me “I don’t need to see this movie to know it is all lies if Al Gore is in it. You know he thinks he invented the internet.” I’m not a fan of Al Gore, but it should be pointed out that of the many lies that he may have told in his life, he never claimed to have invented the internet. He only indicated that he supported legislation that helped create the modern internet. His congressional record bears that out. He did support and introduce legislation that helped create the modern internet. If you are going to hate a guy, hate him for things he actually did. Like evicting poor people out of the slums he owned after refusing to do the minimal repairs that were required to make their rental property livable. There is plenty of reason to hate this guy, why just make stuff up when the facts are already so good.

I’m also more interested in Steve’s opinion than the opinion of the guy at the office cooler that makes the “global warming joke” every time the weather gets cold. The underlying meaning of the joke being global warming doesn’t exist. The truth of the matter is that global warming is a fact. That debate is over. The only people still in denial are the people from the movie “Jesus Camp” and a couple of guys on talk radio. The only debate left for thinking humans is what effect humans have on global warming.

You go to a party. There are a couple of people there that let their alcohol handle them more than they handle their alcohol. The words “Fruity beer!” might escape their inebriated lips on occasion. In this state their equilibrium is not working to its full capacity. They teeter a bit. Their fruity beer escapes the confines of their red solo cup.

From across the room some dolt with a severely underdeveloped sense of humor yells, “Hey! That’s alcohol abuse!”

The dolt looks at his kiss up chorus. They roll in laughter. High fives are dispensed. Jocularity ensues.

This incident repeats itself 10-15 more times during this party. The result is always the same.

I can understand why this joke is borderline amusing when you are 16 and have just swiped one of the old man’s cans of Milwaukee’s Best out of the bait fridge in the garage for the first time. The 16 year old me might have begrudgingly given such a quipster a smirk for their comedic attempt. What I don’t understand is why this mouth breathing simpleton is still amused by the same bit 20 years later. I know I sometimes will do the same bit while trying to work a new crowd into joviality, but how can the same joke be funny to these people over and over and over and over and over again.

I’m sure the answer is cultural. I have never been part of this culture. I’ve never been inclined to utter a “whoo!” when a musician on stage merely mentioned a type of alcohol. I’ve never lost my humanity to the point where I came little more than Pavlov’s dog by the mere mention of something that has been advertised to me since the crib, to the point where it was no longer a choice but a cultural norm. The type of cultural norm that makes people laugh at the same joke the millionth time they have heard it. These people are no longer humans, just automatons waiting for somebody to ring their bell. Thankfully I will always remain outside this culture.

I did enjoy a recent episode of the Colbert Report where Stephen used that “thank you global warming for this blizzard joke” on Jon Stewart. Jon Stewart pointed out that global warming is about climate change and not about the weather on a certain day. The rest of the interaction went like thus:

“You don’t believe in climate change?”

Well played Mr. Colbert. I can only dream about being able to mock that lame global warming joke as well as you did. I salute you sir!

However, bad jokes and funny jokes aren’t why we are gathered here. Steve finally watched the movie and was ready for his evaluation. So I give it to you. From the mouth of my Personal Climatologist.

The first thing he pointed out was that the movie is really hard to watch because half the movie is an advertisement for the greatness of Al Gore. I can’t speak for everybody, but I certainly didn’t watch this movie to watch 45 minutes on the swellness of Al Gore. This movie takes great pains to make you think that Al Gore is just an ordinary guy. A victim of the political climate. They go to the farm where he “grew up”. They talk about his son getting hit by a car. They talk about how his family stopped growing tobacco because a friend of theirs died of lung cancer. Great. All compelling stuff, if 50% of it was true and I cared. I don’t want to see a movie about Al Gore. I want to see Al Gore’s movie on global warming.

The good part is that the global warming part of the movie is interesting. It goes by quickly, but is all too often interrupted by shots of Al Gore walking through airport security just like an ordinary guy.

The fact that the filmmakers decided to concentrate so much of the movie on Al Gore the human will actually hurt the message of the movie about global warming. My friend who won’t even consider watching a movie with Al Gore in it certainly isn’t going to be impressed by the scientific information because he has been so soured on the rest of the movie. Perhaps that guy couldn’t be reached. What other people will the “Al Gore – Great Guy” section of the movie prevent from seeing it?

One of the people I met at the Oscar Party is an Earth Science teacher at Ames High. I asked him what he thought of the Al Gore movie. He said he had two main problems with the movie. First of all, there are no answers for how we can stop global warming in this movie. There are some allusions to the Kyoto Treaty that the United States has yet to ratify and making more fuel efficient cars. That is really it. The other problem is of course the entire “Isn’t Al Gore swell?” vignettes in the film.

The science department at Ames High had a meeting to discuss whether or not to show this movie to their students. They decided not to. They have chosen not to because although there is plenty of science to teach in the movie, there is too much political pro Al Gore stuff in the movie. That part is too political. Because of that part of the movie, less people will see the movie. Less people will get the global warming information that is theoretically the reason why this movie was made.

Let me get to Steve’s scientific commentary. According to Steve the science in the movie is sound. The facts and figures are accurate. The predictions might not be so accurate. Here are Steve’s complaints.

#1. The movie spends tons and tons and tons of time talking about increased carbon dioxide levels in the atmosphere. The movie doesn’t even mention the number one greenhouse gas in causing global warming: water vapor. #2. The movie makes the case that there aren’t any scientists that disagree with Al Gore’s assessment that humans are the primary cause of global warming. Off the top of his head Steve can name two climatologists from M.I.T. that disagree the tenet that humans are the cause of global warming.
#3. The movie doesn’t mention one of the main causes for global warming. It is a cause that humans have zero control over. The temperature of the sun is also going up. The sun’s temperature naturally fluctuates. It won’t keep going up. It will eventually balance out and come back down.
#4. Most things in nature are balanced. It isn’t really the Earth that is in danger. If the polar ice caps melt and shut down the ocean currents, it might cause an ice age. The Earth will balance itself out temperature wise. Humans on the other hand might be screwed. The sooner we die out, the sooner we can start becoming fossil fuel for whatever follows us.
#5. The movie doesn’t really come up with many solutions. If you accept that carbon dioxide produced by humans and human inventions has caused global warming, then the biggest problem facing the human race is overpopulation. Does anybody out there have a quick solution for overpopulation?

That is the analysis that Steve provided me. Take it for what its worth.

It is safe to say that nothing really worth reporting has happened to me since that Tuesday. At least nothing that I will report. I might write a little bit about the movie “Amazing Grace”, but I think it is time to call it a night. I’m heading up to Minnesota tomorrow morning to see Jordis Unga in concert. So perhaps there will be some writings about that in the future. Perhaps there will be a picture montage. Perhaps.