Saturday was the big annual Ames Jaycees Sandbox Fill. I’m going to try to combine a couple of different things together to describe the event and I’m not sure it is going to come together exactly right.

So like I was saying, Saturday was the big annual Ames Jaycees Sandbox Fill. We met up at the Salvation Army at about 8:30 in the morning. We were split up into two teams: Team 1 and Team 2. I was assigned to Team 2. I felt that our team name was not indicative of our dominance in the realm of sandbox filling and was an attempt by Team 1 to claim a superiority that they hadn’t earned at the handles of a wheelbarrow. I suggested that we change our team name to Team Kicks Team 1’s Ass. I’m not sure we ever really made a decision on our team name.

Regardless of the fact that our team name did not indicate such, we were filled with powerhouses:

We ended up dominating the morning and early afternoon by any meaningful criteria. We filled two more sandboxes than they did, including 1 that wasn’t even on our list of assigned sandboxes and 1 that was on Team 1’s list. We also finished up well before they did, despite a couple of hiccups that were not the fault of anybody on our team.

On a downer note, I was also told that I seemed like a Computer Guy. I don’t think that I’ve ever been so insulted in many a year.

Monday morning came around and I started exchanging e-mails with my chums from The Principal Group. I let it slip out that I had stood around the Salvation Army parking lot for about 25 minutes on Saturday morning.

Russell jumped onto this little tidbit:

You appear to be loitering or are involved in some sort of drug trafficking scheme. Am I the only one who felt this needed explaining?

It was actually public service. Saturday was the Jaycees Sandbox Fill. We met at the Salvation Army. Look below to see a not very good picture of me from Saturday. 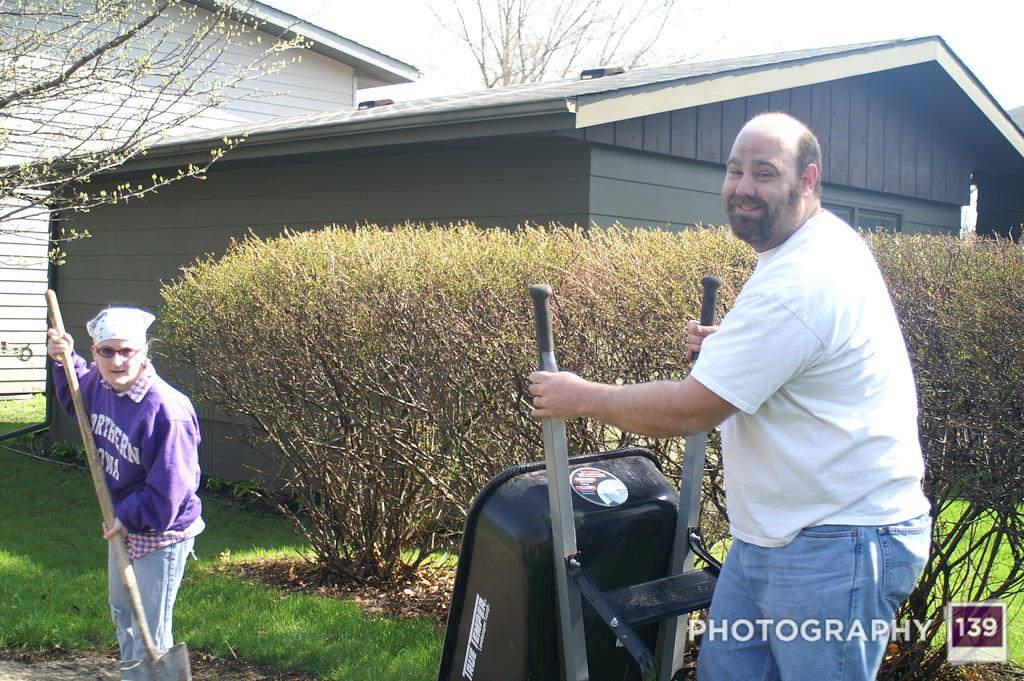 The Me Not Looking So Good Picture

To which Russell replied:

You still appear to be committing some sort of criminal activity. The other person has a do rag, and when the do rag comes out, it’s never above board. How long have you worked for the mafia, Chris?

I believe that Chris was indeed working. He’s a photographer, thus knows when to stop working and how to pose when a photo-op arrives to make himself as photogenic as possible given the circumstances.

Doesn’t anyone else think that Chris looks added to this picture; to make it seem like he did a public service? Really; what kind of person who is actually working with a wheelbarrow smiles?

Then Russell added this:

Why the hell is she doing the digging and you’re holding a wheelbarrow? Be a man and get your hands dirty!

To which I was forced to respond:

I don’t know what is more manly, but moving a wheelbarrow full of sand is not work for the faint of heart. It is a manly and strenuous job. But if you must know, I did my fair share of raking. See picture below: 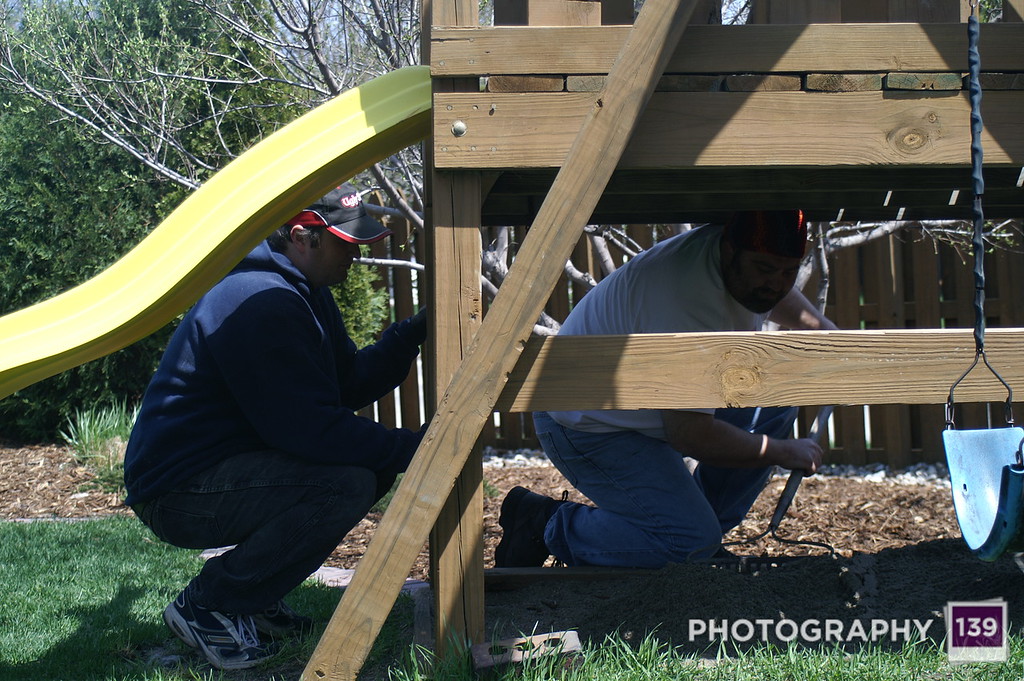 Look! My hands are dirty and now it is more difficult to eat donuts.

Now I’m going to step back from The Principal Group for a moment. There was one moment that kind of soured the day. There was a moment of prejudice and bigotry that made the day a little bit sad. The type of prejudice and bigotry that I thought that this great nation of ours had moved beyond, but I’m going to regale you with the tale because at least one member of Team Kicks Team 1’s Ass found it to be a hoot.

A customer of ours saw Jamie pushing a wheelbarrow. 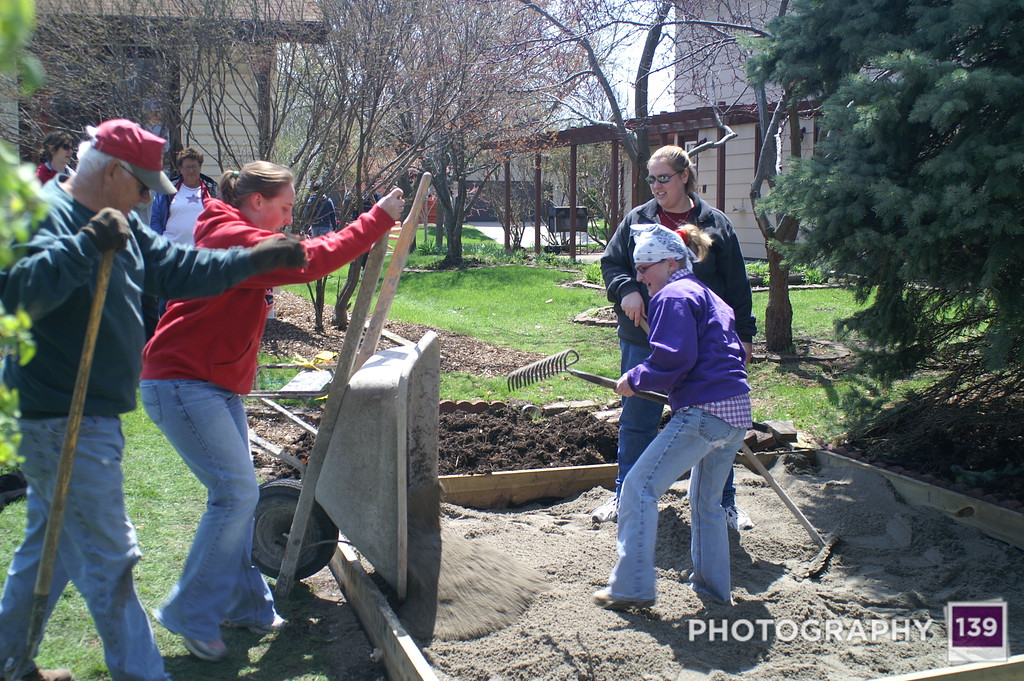 Jamie and her Wheelbarrow

The customer approached Shannon and asked her this bigoted question:

What do you call a woman doing a man’s job?

Let us put that sad story of prejudice and move back to the e-mails of The Principal Group.

After I sent out the picture of my raking, I figured I would be inundated with apologies, but that didn’t happen.

And in this picture you’re face is enshrouded in darkness. And how cruel is it to be burying merchandise and stolen goods underneath children’s playground equipment? Have you mafia types no shame?

Perhaps you would like to sign on and help for next year? Stolen merchandise just won’t bury its self.

For the record, I now have a prejudice against sandboxes that are underneath play equipment, where the slide doesn’t move out of the way.

I will volunteer if there aren’t a lot of kids running around. The Big Hu-Hot has never been an patient man. And the Big Hu-Hot will also not work in inclement conditions, but is not opposed to some muscle work if it’s for a good cause or a percentage of any profits. My do rag is black, though, not lily white, so I’d be naturally worried that would cause a conflict.

So perhaps next year I might be able to get Russell out there to move some sand around.

I do have more pictures of the event. You can click on the picture below, or the link below the picture and it will take you to my Snapshots Gallery. After that all you have to do is click on the Ames Jaycees Album and get to perusing.

In the upper right hand corner, there is a link that says “Register”. Just click on that, agree to my terms and conditions and then fill out some information. An e-mail will arrive in your inbox that tells you how to complete the registration process. Here is a hint: It involves clicking on a link in the e-mail.

Once you have registered, you can Login. Here are the benefits of registering:

This Gallery is still under construction (meaning new pictures are added daily), but it is fully functioning.

Any way, that is enough computer garbage. You’ll figure it out, I’m starting to sound like a Computer Guy, but that is a bit of unpleasantness to discuss in the future.