Shannon had over a foot of hair cut off her head last Thursday. On Sunday I was able to document this joyous hair loss, but the day was not completely happy.

In the picture above you should try to look past Shannon. You may notice something. Shannon appears to be standing on an abandoned railroad bridge.

My favorite park in Ames is Brookside Park. I don’t believe I would be talking out of turn if I were to guess that it is also Shannon’s favorite park. We met at the park and walked to this bridge despite the cold temperatures.

The previous Saturday we met there to take her before pictures. We talked about going to this bridge on that day because she was curious about it. She had heard a wildly inaccurate characterization of the bridge from Becky. Becky and I had walked across the bridge one night after a Jaycees meeting.

On that Saturday there must have been about 20 people just hanging out on the bridge. I thought we should give the bridge another try, but it did not end up to be one of my better ideas. 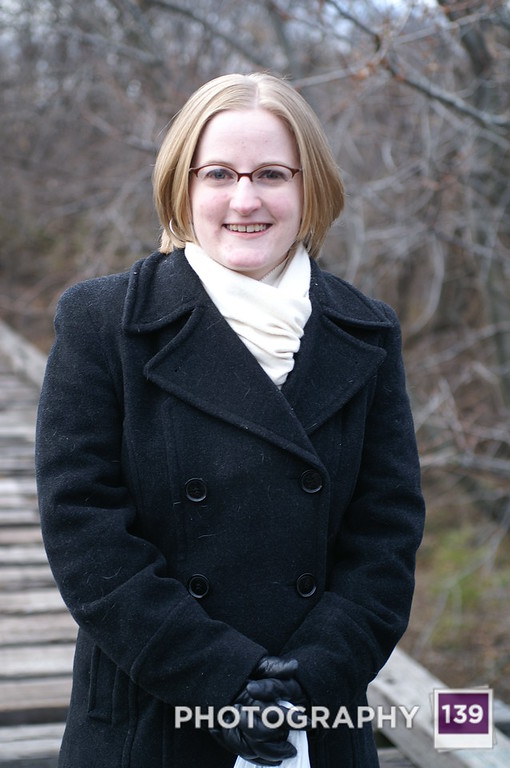 If you take you gaze downward you might notice a few things about Shannon. I mentioned it was cold. The proof can be found in the coat/scarf combination that she was wearing. Although it is stylish, the gloves she is wearing are not for fashion purposes. Shannon was cold.

The particularly observant might notice a couple of other things. In her gloved hands Shannon appears to be holding a bag. The bag contains the hair that Shannon parted with so that she could make a donation to Locks of Love.

If you know this bridge very well, you might be able to gather from the trees behind Shannon, she is standing over water.

I’m sure you can see what is coming, but on this day I did not. When Shannon reached into the bag to pull out her former hair to pose for a picture with it, one of the 8 braids (I have no clue if that is the right word) escaped her stylishly gloved, but frozen hands.

It fell between two railroad ties and into the ice cold stream below. 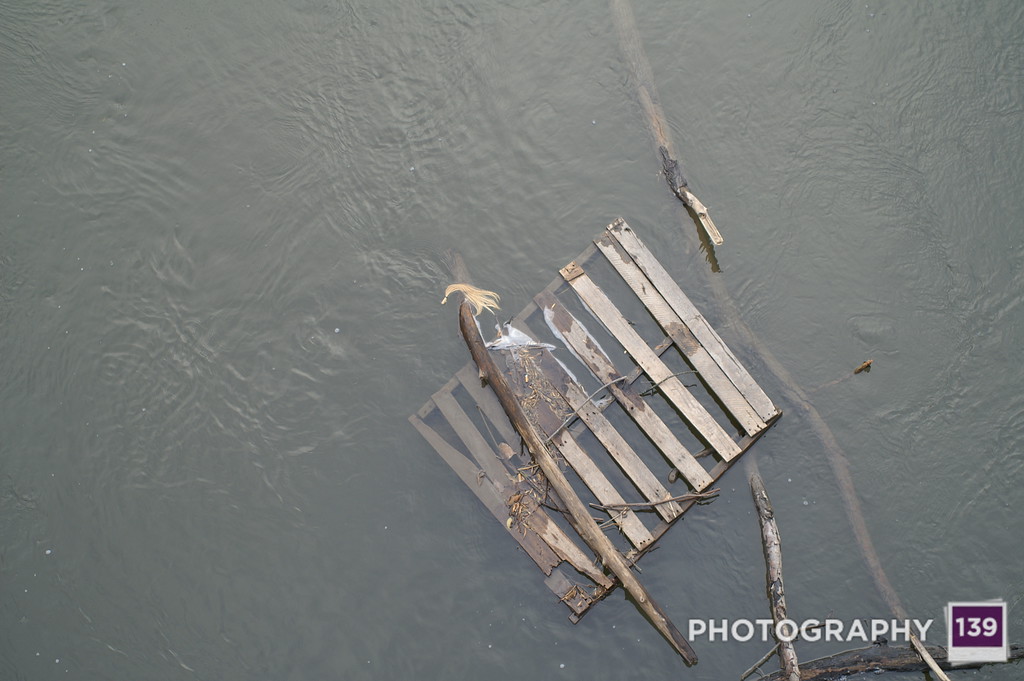 It was a heart breaker. I didn’t think Shannon would want this to be documented, but she insisted that it be documented.

We managed to get the rest of her former hair put away and left that cursed bridge.

Once we got to dryish land we took some pictures of the her and her former hair.

That is lots of hair.

I repeat. That is lots of hair.

The lost hair didn’t take off down the stream immediately. There was some time where it seemed like it might possibly wash near enough to the bank that we could get to it with out descending deep into the near freezing water.

Shannon watching the hair float away.

But it was not to be.

The day was not a complete loss though. There are still 7 locks to be sent to Locks of Love. A wonderful donation.

Plus, Shannon does have a great new hair cut!

I also gave this beanie to Shannon. I hate to part with anything that Teresa makes, but I don’t think the colors are for me. Everybody seems to say that the hat looks better on her than me any way. It is probably because it is hard for me to give the badass vibe that I normally emanate when I’m wearing that beanie.

After the photo shoot Shannon helped me to write a CPG for the Ames Jaycee website that I redesigned. I won’t bore you with the details, if you aren’t a Jaycee you really wouldn’t be that interested.

Then we joined my Mom, Carla and Teresa for supper at Jeff’s Pizza. If I haven’t written about it before, I love Jeff’s Pizza. I’m a particularly large fan of their Gyro Guy pizza and their Clones. Clones are pizza rolls and they are fantastic. Better than Gumby’s used to make before Gumby’s went terribly downhill.

The meal was pleasant despite the fact that the large amount of females at the table insisted on ordering a Chicken Alfredo pizza. I’m going to tell you flat out, chicken does not belong on a pizza. Even the gourmet pizza wizards at Jeff’s Pizza could not sway my opinion. I will freely confess that their Chicken Alfredo pizza was the best chicken pizza I have had to date, but it still wasn’t a pizza I would want to sit down and take to town.

Thankfully, we ordered a Gyro Guy pizza as well, so I didn’t wither away.

The conversation was relatively polite until it inevitably turned into gossip hour about my friends. I was able to put the smack down on that though. We gossiped about Teresa’s friends instead.

Truth be known, I don’t gossip.

After dinner Shannon and I went to Stephens to see the Jerusalem Symphony Orchestra. It was the first professional symphony orchestra concert I have ever attended. They played 3 pieces of music including a piece by Bernstein and a piece by Copland.

The lights never fully dimmed. This was something I wasn’t expecting. Another thing I found odd was that they opened the show by playing the Star Spangled Banner. I’ve gotten to the point where I only hear the National Anthem at sporting events, so that was a nice little surprise. They followed the Star Spangled Banner with the playing of what I’m going to assume was the Israeli National Anthem.

They concluded the show by playing two encores. Before the encores the conductor of the Symphony Orchestra spoke to the crowd and praised people from Iowa. I guess that was the classical music equivalent of “You rock Ames, Iowa! We wish we could take you with us.”

It was a very enjoyable show. I will gladly go see a Symphony Orchestra concert again in the future.

So the night ended on a high after the low of losing the hair. An excellent day at the aggregate level!