I had decided to shave all the way down to a dirty naked face last weekend. It had been over 3 years since my chin had tasted air and felt the rays of sunlight. My chin was dreadfully dry and desperately in the need of some moisturizing. Lots and lots of moisturizing.

For some reason, I allowed myself to be sold by Jesse on shaving down to just a moustache for one glorious day. Despite my better judgment, I did it.

On Thursday night I spent close to an hour in the bathroom slowly trimming my beautiful goat down to a dirty stache. When I had completed my task, I had to make a conscious effort to stop myself from punching my reflection. I hated that dirty stache.

Although I had stayed up well past my normal bedtime to complete this mission from the devil, I couldn’t sleep at all. I knew that I had violated the natural order of things.

I showed up for work the following day and tried to avoid everybody. Well, I did stop to see Micky. He deserved to see the stache since he has been a rock for me in the Busted Furnace Support Group that we have with Vest every few days.

Jesse showed up at work about an hour after I did. He was still sporting a splendid goat. I felt that I had been had, but he showed me his clippers. He went to the restroom and came back looking like the same type of doucher that I looked like. 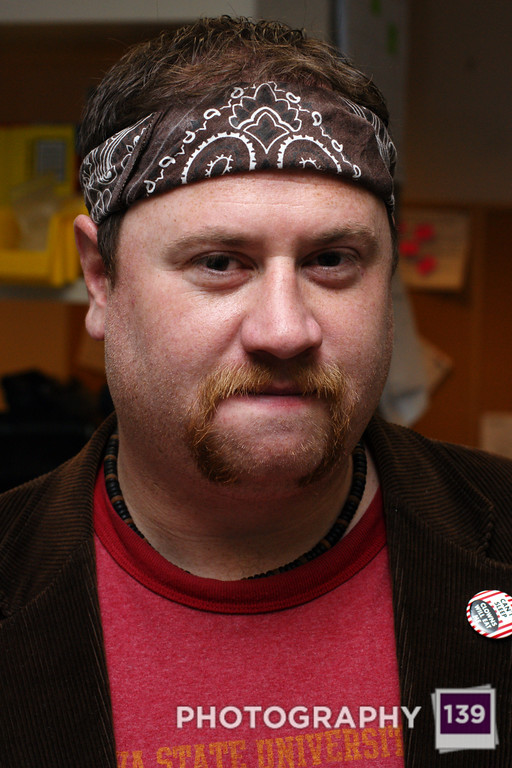 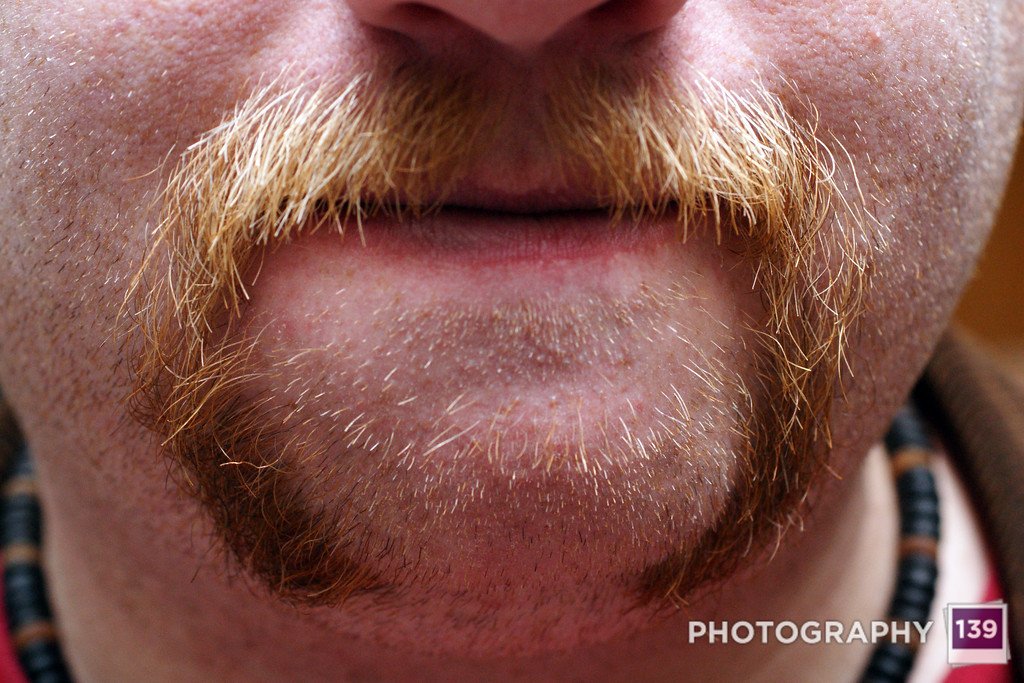 After taking those pictures of Jesse looking so wretched. I allowed myself to be photographed in this horrible state. 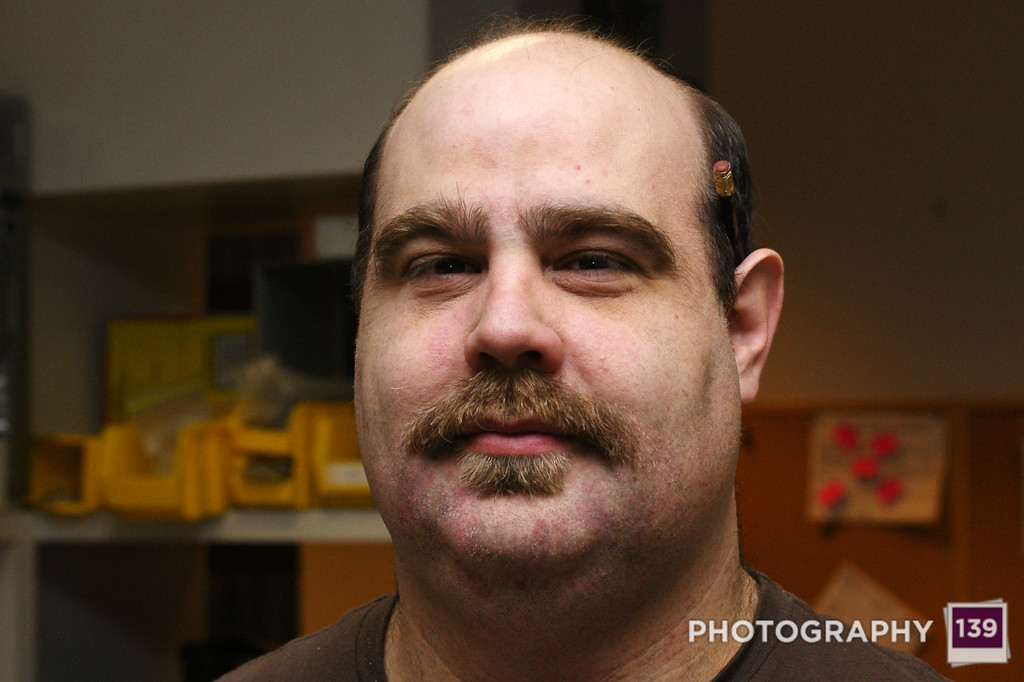 As I was posing for this picture, the World’s Greatest UPS Man came in with his daily delivery. He seemed to enjoy how wretched I looked. 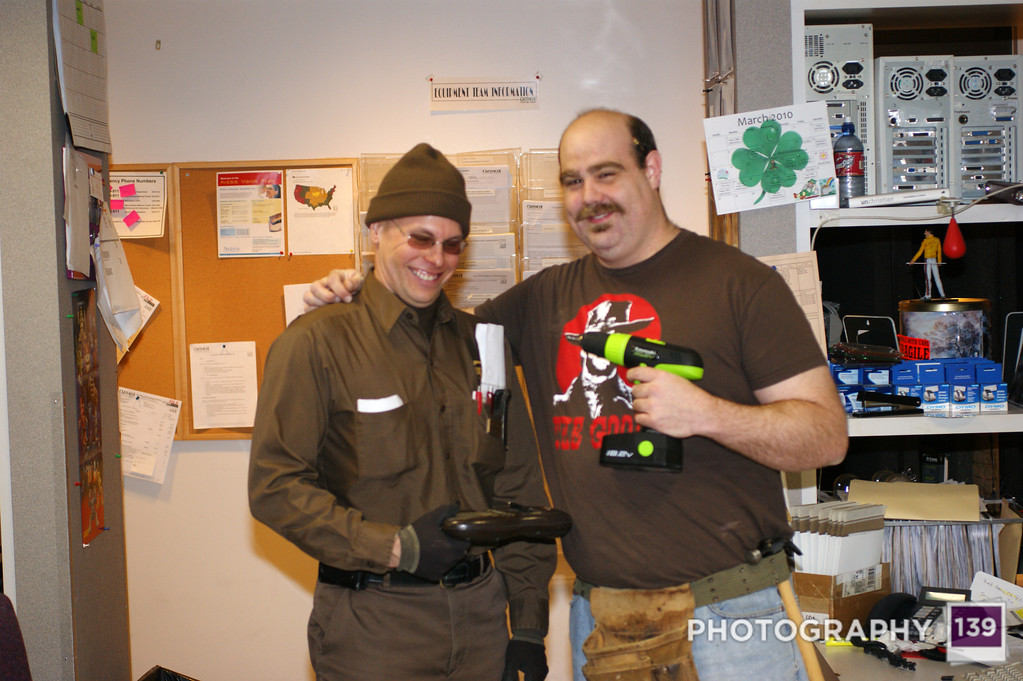 Then Jesse and I posed for a picture.

I have known Jesse since I moved from unannexed Boone to Urban Boone and enrolled in Mrs. Ford’s 2nd Grade Class. Over the years we have posed for many a photo together. But I have not a doubt in my mind that this is the worst picture of us ever. 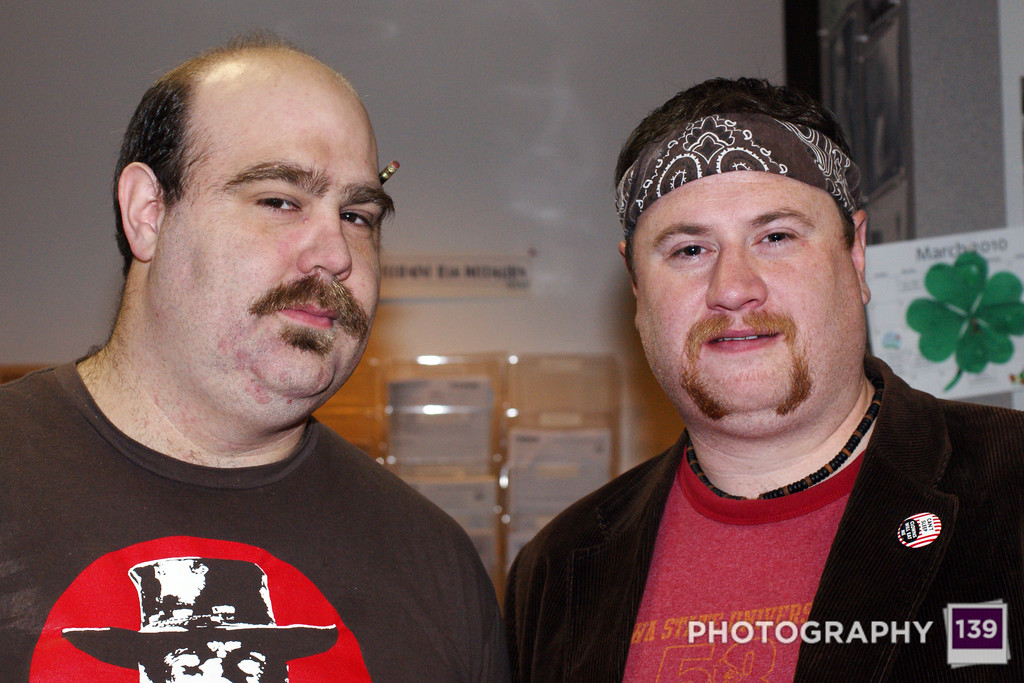 That night Jesse and I went to Trivia Night for FNSC. We had 3 missions.

The first mission was to drink as much sweet tea out of mason jars as was humanly possible. Check and double checked.

The second mission was to pilot Team Stache from the complete and utter futility that has been its history all the way to mediocrity. Check and double checked. Team Stache (I’m not sure what they were known as before FNSC showed up and revolutionized the game) had never finished above 3rd to last. We piloted the team all the way to respectability. We finished almost exactly in the middle of the pack of 24 teams. Although we would have surely finished higher if the Sports category would have included sports questions. The Winter Olympics and NASCAR are not sports. Although I’m pretty sure that the judges would have given us points for picking Brewster Baker as the answer for the question about the winner of the 2010 Daytona Left Turnathon. But we were overruled.

Mission 3 was to be the table that had the most fun. Check, double checked and triple checked. I knew every member of Team Stache (Jay, Willy, Geri D., Shannon and Jesse) very well with the exception of Papa Smurf and his wife. At the end of the night I wasn’t sure if Mr. and Mrs. Papa Smurf loved or loathed us. They seemed to run hot and cold on us and certainly weren’t fans of our lengthy discussion of how great Kenny Rogers was in Six Pack. However, Mrs. Papa Smurf called Geri D. on the following day to tell her one and only one thing – She had never had so much fun at Trivia Night and it was all because FNSC is the bee’s knees! She wanted to make sure that we would be returning to Trivia Night in 3 months. I think FNSC might just make a return, but the moustaches won’t. I’m kind of thinking that our team theme on that night will be “lumberjacks”. A little tribute to my boy Steve Roberts.

After our team huddled up and put all of our hands in and shouted “Mediocrity!!!” I tried to convince Jay to come over in the morning to take a couple of photos of the stache before it was clipped from my face and washed down my sink into the dark, dank drain of history.

Jay insisted on taking the pictures that night because he couldn’t stand to know that this moustache was even in existence.

Here are a few publicity stills for a movie that will never exist starring “Hammer”. 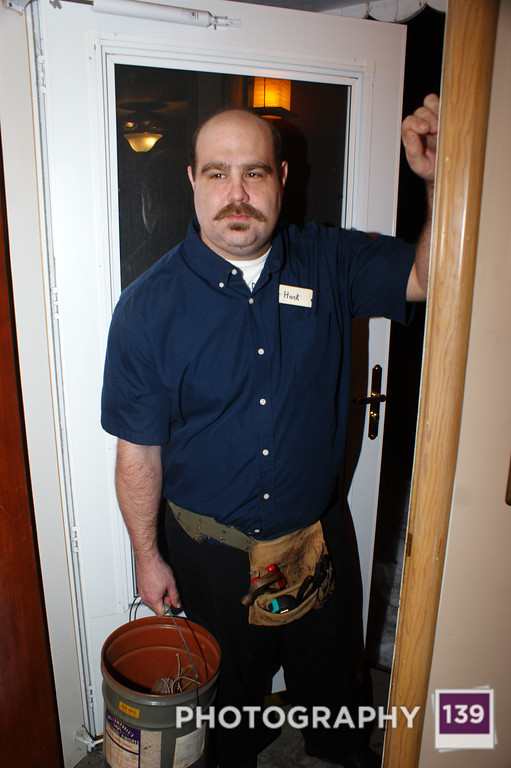 “Did you call a repair guy?” 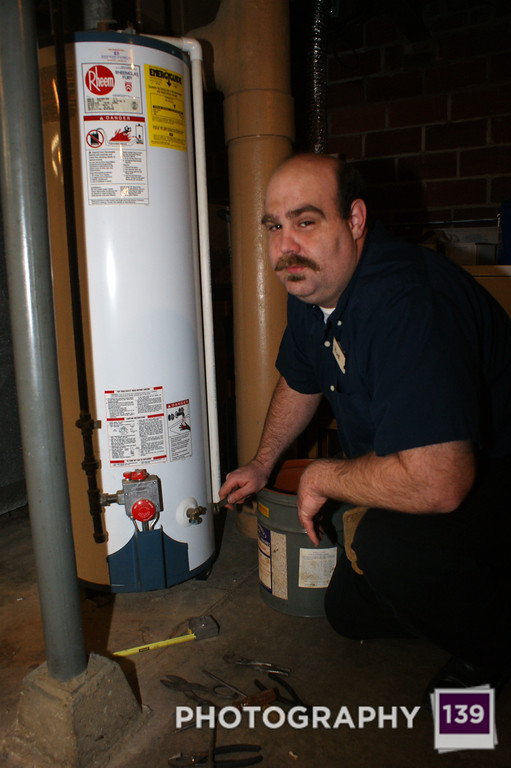 “Mrs. Robinson, there doesn’t seem to be anything wrong with this water heater…” 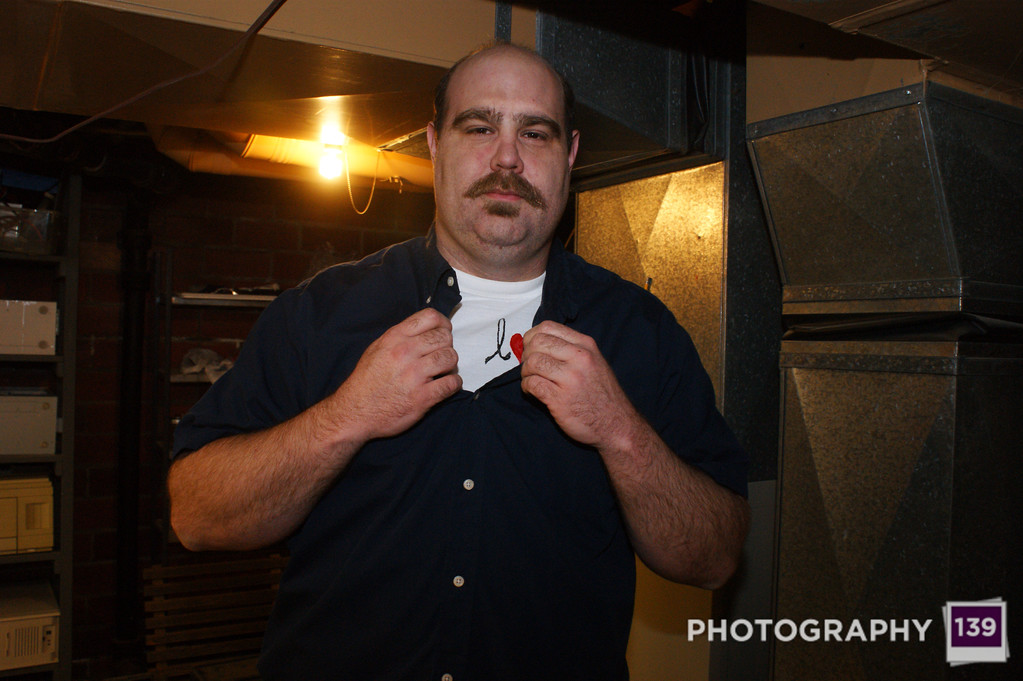 “It is kind of hot in here. Do you mind if I take off my shirt?”

Although I think most people were just being kind, the reviews on the moustache were mixed. Mixed between people who were honest and people who were struggling to come up with something that didn’t sound cruel.

4 women from work commented that it looked “good”.
Andree said, “Are you hosting a Do-It-Yourself show on channel 11 tonight? You look exactly like Al from that Home Improvement show.”
Jen said, “I’m totally laughing out loud!” I will point out that she actually typed out “laughing out loud” as opposed to “lol”. These mean two totally different things. Jen also admitted on Sunday that she had shown a stache picture to Dionne from work. Her response was perhaps the most honest. “He needs to shave that immediately.”
Shannon said, “The soul patch makes the stache work.” I still don’t know what she means by make it work. As near as I can tell it doesn’t work at all.
When I sent the picture to Jill, I warned her that it would make her want to punch me in the face. Her response. “U don’t deserve a punch in the face! It’s not bad, especially considering NO ONE should have a moustache long term in the 21st century.” Jill must be a pacifist because I definitely deserved a punch in the face for looking like that!

Although Jesse will be celebrating Moustache Day again next year, I will be passing. I don’t think I have the discipline to make it through the day without hurting myself and that wretched upper lip hair.

4 thoughts on “Punch Myself in the Face”