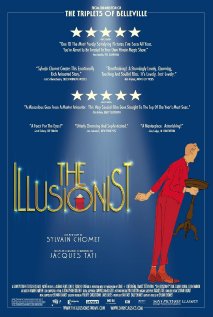 I don’t know that I brought any positive inclinations into the theater with me. I’m not overly familiar with anybody involved in this movie. Although I was excited to see a traditionally animated movie again.

I am painting this with a very broad brush here, but I don’t really enjoy foreign animated movies. I enjoy foreign live action films, but have never really liked a foreign animated film with the exception of Persepolis. In particular, I can’t stomach anime. Literally. I get sick watching anime. The Illusionist is a French film, like Persepolis, so it had that going for it.

Details the story of a dying breed of stage entertainer whose thunder is being stolen by emerging rock stars. Forced to accept increasingly obscure assignments in fringe theaters, garden parties and bars, he meets a young fan who changes his life forever.

I go to about 30 movies a year with Nader. Maybe more. He is awake for about 10% of them. This is the 2nd time we have been down to The Fleur to see a movie and the 2nd time that he has fallen asleep before the movie even started. This time, I kind of wished I could have joined him in grabbing some shuteye.

Although there are times that this movie is beautiful to look at (particularly), it is mostly just boring.

This is a French film and it is presented without subtitles. However, there is hardly any dialogue in the the entire film, so not being able to understand what little dialogue there is, doesn’t really hurt the movie. It isn’t necessary for understanding it.

The movie just feels very deliberately paced and what does happen might seem whimsical to some viewers, it just left me wanting more of a plot than an entertainer watching his job disappear before him trying desperately to cling to his last audience member.

The ending is also incredibly depressing. That isn’t a criticism. I can handle depressing endings, but considering how bored I was for the first 75 minutes of the movie, I didn’t need to be depressed for the last 5.

Although I could relate to The Illusionist’s plight of owning a rabbit that hates him.

Buy on DVD
No chance.

2010 Ranking
Dead last of the animated films I’ve seen. I think Despicable Me probably deserves the Oscar nomination that this movie holds.

Bonus Information
On Tuesday Waiting for Superman came out on DVD. If you have even a passing interest in what is laughingly referred to as the education system in this country you should run to your nearest video store and pick up a copy of this movie. It is not nominated for Best Documentary and that is the greatest travesty of the Oscar nominations.

Waiting for Superman nails it on the head what is wrong with our educational system (hint: bad teachers and teacher’s unions) and it will tear your heart out watching our nation’s youth being reduced to gambling (yes, that is what a lottery is) for a chance at going to a decent school and therefore a decent life.

Although I would strongly urge you to watch it by any means necessary (short of theft, looking at you pirates) it is definitely worth buying. Why? In addition to being a great movie, the Blu-Ray (I don’t know about the DVD, I’ve kind of evolved) comes with a 25 dollar donation to the local public school of your choice. In a way, you are getting your money back.

For more information, go to the Waiting for Superman website: http://www.waitingforsuperman.com/

One thought on “Movie Review: The Illusionist”