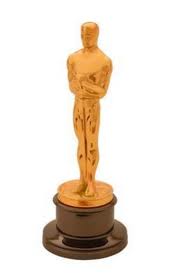 I thought it wouldn’t hurt to give some predictions on tonight’s Academy Awards. At least the categories that I think I can write semi-competently about.

I have seen all 5 of these movies and read none of the source material.

I want to win: The Social Network.  This is the most brilliant script of the year.  Adapted or otherwise.

I think will win: The Social Network. I repeat, the most brilliant script of the year.

I have seen all the nominees except for Another Year.

I want to win: The Fighter.  Although Inception is my favorite of the nominees, The Fighter brings to life better characters.  Although the script isn’t without its flaws.

I think will win: The King’s Speech. Even though it isn’t one of my favorite movies from this year, it is a solid script that centers around 2 very interesting characters.

I have not seen Inside Job or Waste Land.

I want to win: Gasland. Flammable water. That is all I need to say.

I think will win: Restrepo. War documentaries seem to do well in this category and this is well-done.

I have seen all 3 nominees.

I want to win: How to Train Your Dragon. I think this movie is the funniest and best of the 3. I admit to being partial to dragon movies.

I think will win: Toy Story 3. They might as well just retire this category and give the award to Pixar every year. Toy Story 3 is nominated for Best Picture and the other 2 are not.

I have seen 4 of 5 nominees. I have not seen Animal Kingdom.

I want to win: Melissa Leo. That is hard for me to say, since I think everybody knows my favorite actress is Amy Adams, but I have to confess that Melissa Leo is even better than her in this movie.

I think will win: Melissa Leo. Although there is potential to split The Fighter votes, I still think Leo will win. It still annoys me that Hailee Steinfeld is in the Supporting Actress category, when she clearly should be nominated for Best Actress.

I have seen all 5 nominees.

I want to win: Christian Bale. Even though I want to hate Christian Bale he is tremendous in this role. There are some great performances by the other nominees, but I think this is the biggest no-brainer category of this year.

I think will win: Christian Bale. Any other year, Geoffrey Rush would have won this category. He chose a bad year to have his best performance since Shine.

I have seen 4 of the 5 nominees. I have not seen Rabbit Hole.

I want to win: Michelle Williams. I think she had the most interesting performance of the year, but the nomination was the award for her. I would also like to see Jennifer Lawrence win. She gave a pretty amazing performance for somebody who’s biggest accomplishment before this was being on The Bill Engvall Show.

I think will win: Natalie Portman. There is no denying that her performance is great.

I have seen 4 of the 5 nominees. I have not seen Biutiful.

I want to win: James Franco. Eisenberg is great. I have no clue why Jeff Bridges is even nominated. I didn’t know that mumbling was considered great acting. Franco’s was my favorite performance and he spent most of the movie trapped under a rock.

I think will win: Colin Firth. As much as I hate royalty, Firth is pretty amazing as the king with the stuttering problem. Oscars frequently go to actors portraying people with a disability. This is the only 1 of the 5 performances that involves a disability, unless Rooster Cogburn is suffering from a disability that doesn’t allow him to enunciate words properly.

I have seen all 5 nominees.

I think will win: I just can’t imagine a world where The Social Network doesn’t win this award.

I think will win: The Social Network. It is the most original movie of the year, so that works against it slightly. However, I think the Academy has done a pretty good job in the last few years getting this category right. I have full faith that they will get it right again.
That is it for my preview. Enjoy the Oscars!