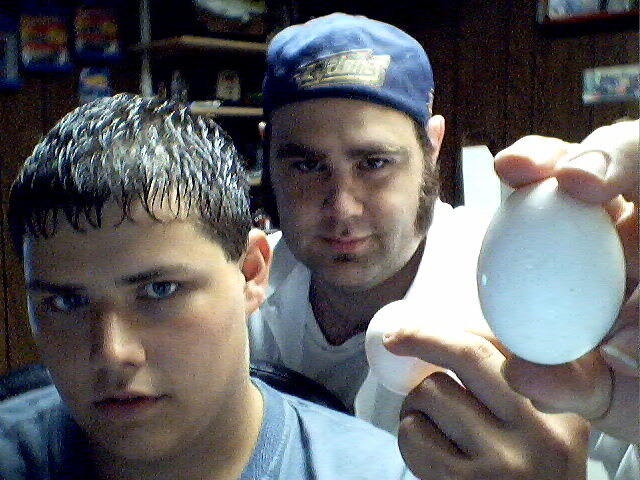 These pictures were taken in Dustin’s dad’s basement with a webcam. They were used to promote a crew picnic that I was running for the Boone Outpost of the Evil Clown Empire.

Perhaps the marquee attraction at this crew picnic was going to be the egg toss competition. A sport that Dustin and I so thoroughly dominated that eventually the sport lost its national appeal. America eventually gets sick of the same two guys holding up the trophy at the end of every single competition.

The event itself ended up being kind of a downer as it was leaked at this event that I was transferring to the Campus Outpost of the Evil Clown Empire and some people left in a strange combination of sadness and anger. The reason for this movement on my part involved a woman named Heather that I absolutely could not stand. As you may or may not know, I am pretty easygoing and can work with just about anybody. So you can only manage how irritating this person must have been.

The short version of the story is that she was a combination of two things I can’t stand: laziness and lying.

For the long version of the story… well maybe I will write about it someday on the Robot Monster Bros. website.

However, perhaps the real hiccup of the event was the actual Egg Toss. In a match that was poorly refereed, a Chris Kramer and a Nathan Mallas were crowned Egg Toss champs in what can’t even be described as an upset of epic proportions.

It would be a great story, but they very clearly cheated. They had an extra egg that they hid and used when their first egg broke. I wish I was making that up, but I’m not.

To this day, this is the only blemish on Dustin and I’s perfect egg toss record. A blemish that comes with an asterisk.