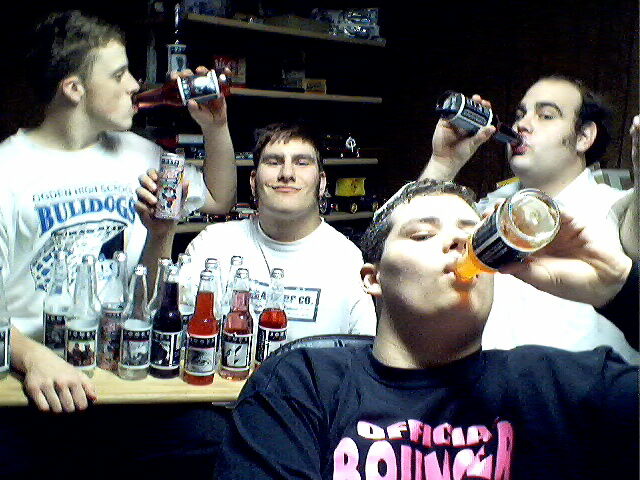 These pictures come from the following folder: Backup/Old My Pictures/Jones Soda

These pictures might come as kind of shocking. So I better give a small bit of back story.

If there was ever a chance for me to be a cult leader it was when I was the closing assistant at the Boone Outpost of the Evil Clown Empire. It was the peak of my charisma. It was the peak of the power of my sideburns. I was practically a town/county celebrity and for all of the right reasons. People did and said what I told them to and everybody wanted to be in my company.

However, I didn’t use my power, charisma, and sideburns to form a cult. At least not a religious cult. I used them to introduce my love of Jones Soda to the people that surrounded me and to get them to love Jones Soda.

Sure I know plenty of people that place a premium on alcohol in their value system. I’m sure if I were them I would probably need alcohol to put up with being them too. But I’m not them, I’m me, and I don’t need to medicate away the pain of being me, because I am “amazing”, “wonderful”, my talent “knows no bounds”, and “the bringer of awesome”.

That doesn’t mean I don’t like to get together with a few chums after a hard night of serving what is laughingly considered food to some of the finest white trash in all of Boone County and have a few frosty cold beverages. Only the frosty cold beverages I enjoy are Jones Soda’s Green Apple Soda or their Fufu Berry or their Grape. All divine creations.

So it was on a hot, humid night that the 4 of us clustered into Action’s basement and made these 2 pictures with a webcam.

These two pictures existed because we were sending them to two separate places.

The first picture we sent to Jones Soda to show our love for their superior product.

The 2nd picture we sent to Hy-Vee (at least I think we did or we might have just sent a strongly worded letter that pointed out the economic impact of their poor decision) to show them exactly how we felt about a stocking decision they had made.

Jones Soda makes an energy drink called Whoop Ass! The Boone Hy-Vee decided to stop stocking Whoop Ass! because some old battle axe complained about the name of the product.

The Edge actually sent our letter on to Jones Soda and they rewarded us with a case of Whoop Ass! It was a monumental victory for the little guy!

Next week’s pictures come from the following folder: