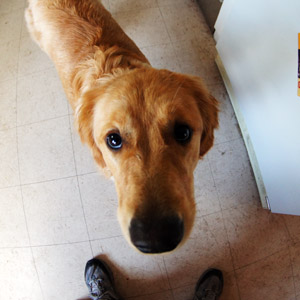 After months of hype, Naima and I finally were able to make our 1st trip to the Ames Dog Park recently.

Unfortunately, despite having a very good park system, Boone does not have a dog park. This is a hint for any would-be future Boone mayoral candidates out there. If you want my support you know my 2 conditions.

Number 1 involves the Pufferbilly Parade and a pink dress. You know what I’m talking about.
Number 2 involves bringing a dog park to Boone.

The trip from Ames to Boone had its moments as Naima is convinced that she is a lap dog, but once we got there I was very pleased with how everything went. I was hoping there weren’t many other dogs there for our first trip and there weren’t.

In the big-dog-dog-park there were really only two dogs. A German Shepard that just kept walking the trail over and over again. Then a big black dog that wasn’t overly interested in playing.

So Naima mostly kept to herself as she walked the perimeter of the park smelling everything out.

Here are a few pictures of the trip and from before the trip:

The only thing I think Naima didn’t enjoy was being separated from the small dogs. There were quite a few more small dogs at the park that she was sad that she couldn’t get to play with. She is accustomed to playing with small dogs as her top playmate is Carla’s dog Chloe who tips the scale at 10 pounds.

It was certainly worth the drive and I hope Naima thought it was worth her shoulder surgery and weeks of puppy bedrest!

Next week’s Random Wednesday will feature pictures of Evie!