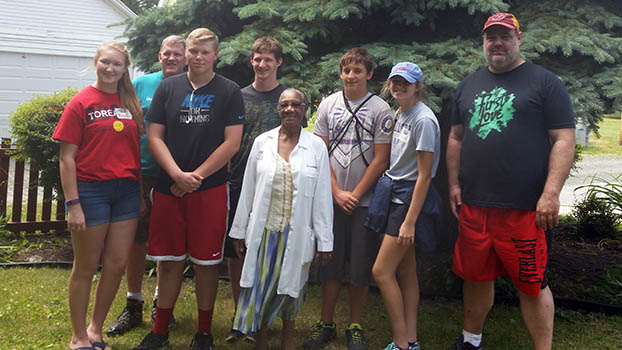 The remainder of my Mission Trip photos. Unfortunately, I don’t have pictures of much of the remaining week. 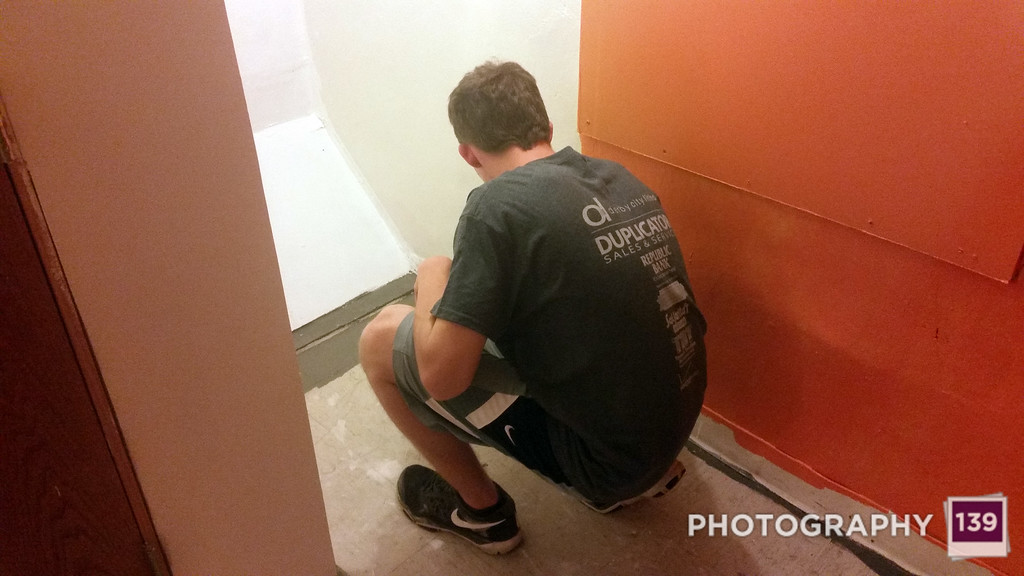 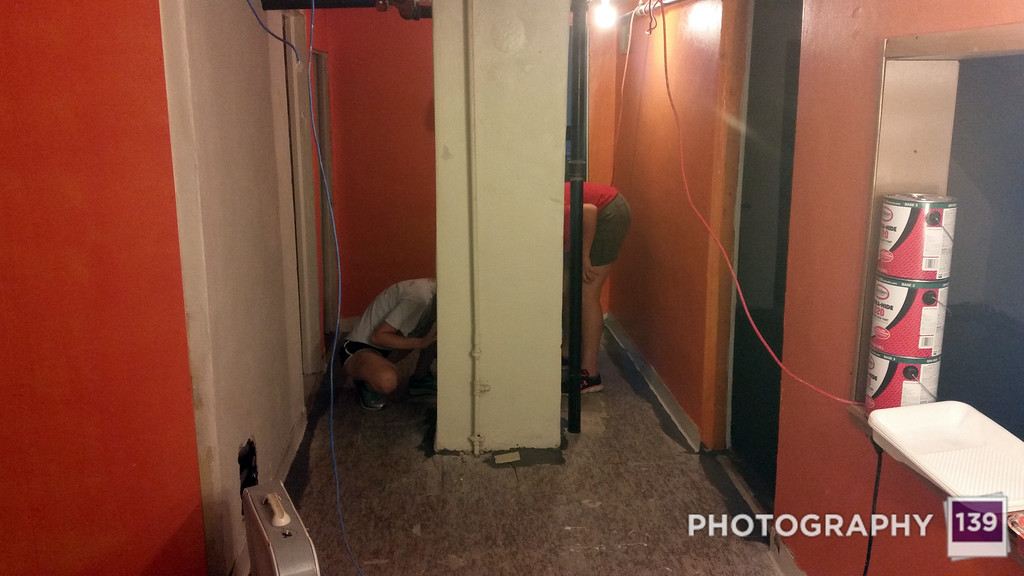 Elizabeth and Megan painting the floor. 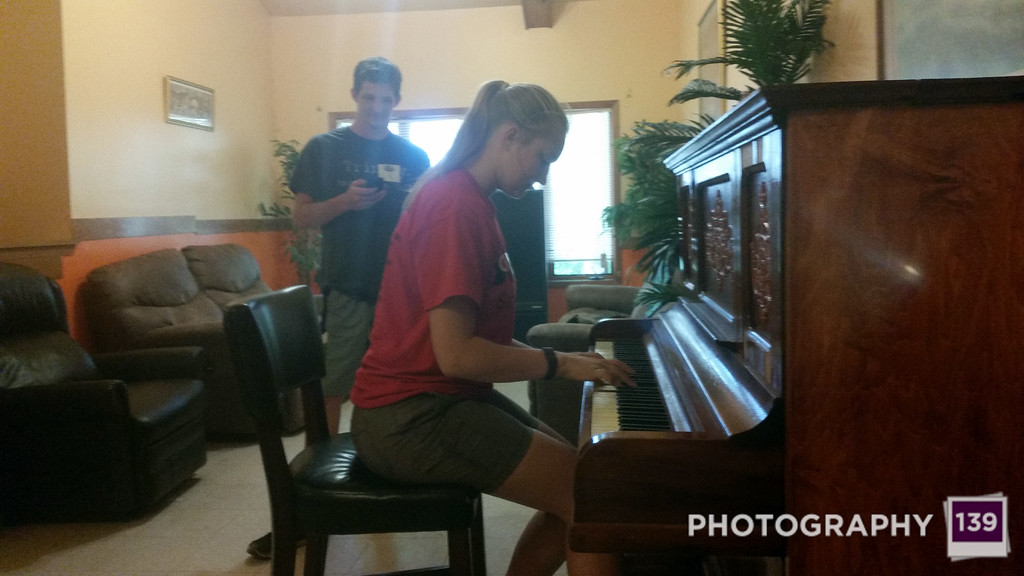 On Tuesday, The Family House seemed to peter out of jobs for us to do. Late in the afternoon they brought us into the common room for an activity called Debates. This is an activity where they ask the residents questions and they have to give their opinion and then defend their position. The kids really enjoyed this game. They were particularly engaged in questions like: “How old should a kid be before they get their first cell phone?”, “Should all states have the death penalty?”, “Would a Trump presidency help our economy?”, and “Should a step-parent be allowed to whoop a step-child?” One of the residents became a crowd favorite when she stated that if “some man ever laid a finger on her child, I’d kick his ass”. At the conclusion of Debates, Megan and Jay played the piano and entertained the residents. The ones that were into Dr. Dre, any ways.

While we were sitting around, Cordelia came in and took us on a tour of The Family House to show us jobs we could do. Earlier in the day, Cornelius told us that we couldn’t come back on Wednesday because they wouldn’t be there. Cordelia told us we could come back and that they would have a list of jobs for us to do.

On this tour Cordelia told me that she didn’t know what she paid a maintenance man for, he didn’t do anything. Then she added that she couldn’t get any could help. If her kids acted like this (her employees), her “husband would’ve killed them.” I told you Cordelia was a house of fire!

We left on Tuesday expecting a list of jobs to greet us on Wednesday.

Our Tuesday night activity was listening to a group called Life Changers. 4 people told us their story. 1 woman spoke about an abusive relationship that left her suicidal. Another woman spoke about depression that lead to a suicide attempt. A guy told us a story about dealing drugs and spending time in prison. All of them had been redeemed by God.

The fourth woman told a story about how she had a pretty good life. Yeah. The point of her story was that they wanted us to know that not everybody is having struggles in Milwaukee. Although this came off like an advertisement for a college prep program that the emcee ran. The part where he asked her if she got married so she wasn’t living in sin, was particularly awkward.

Glen, the ex-drug dealer, had become a musician and sold his rap CD. Several of the kids purchased it. I think I listened to Track 3 of his CD about 50 times on the rest of the trip. I’m not even mad. It made the Peterson van bump. (I drive a borrowed van on these trips.)

So it turns out, on Wednesday they didn’t have a list. We mostly sat in the court yard. Waiting for a job. This was disheartening for the kids. They showed up with a ton of motivation and enthusiasm. Then when there was nothing to do, the enthusiasm left the balloon. 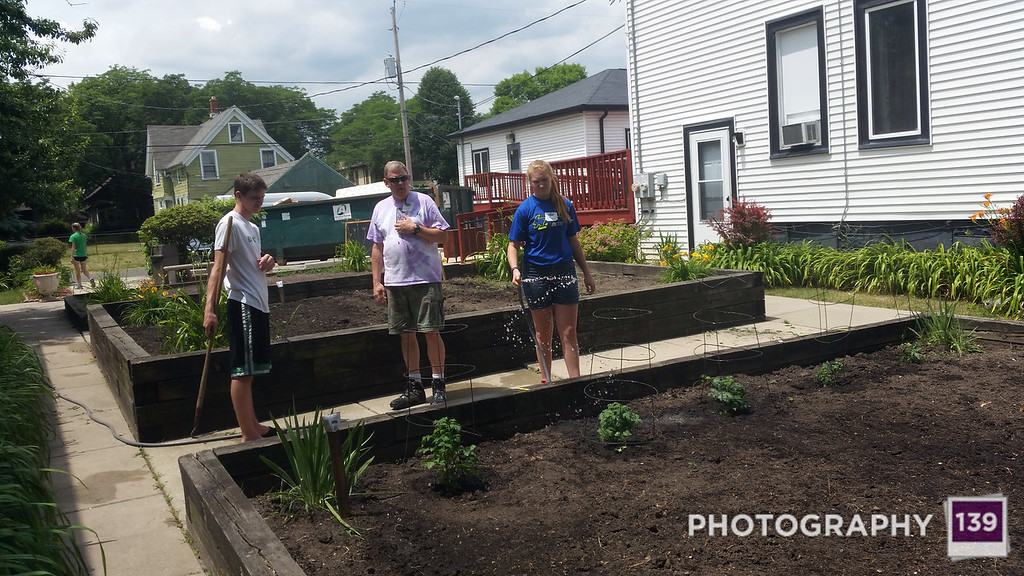 Finally, with about 30 minutes left to go, they told us, “It would be nice if you planted our garden.”

Megan took over this job. She is a agricultural expert. 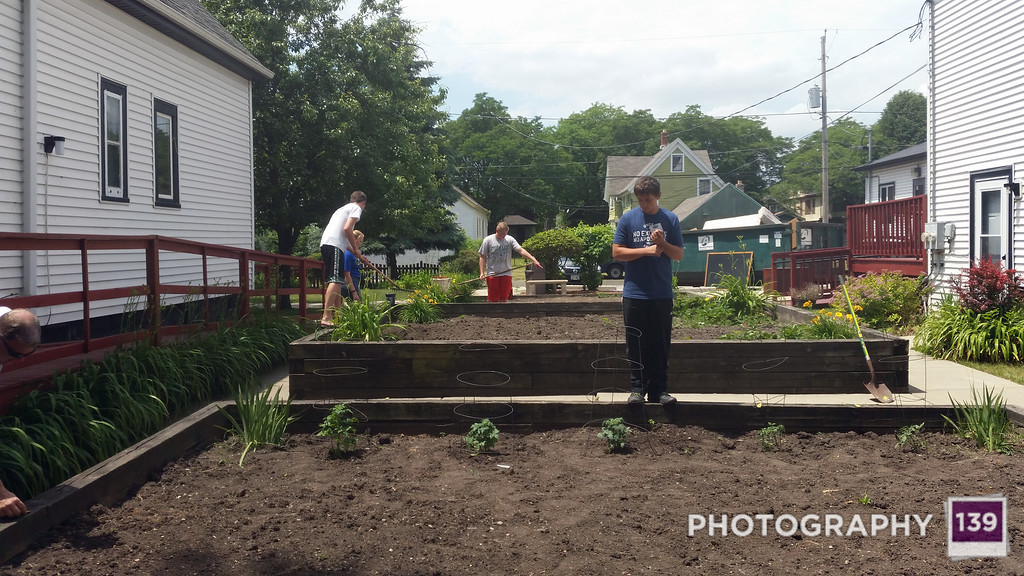 After the showers Andy, Summer, and I went to this Catholic surplus store. The life sized Jesus crucified statue: $5900. I decided I didn’t need it. 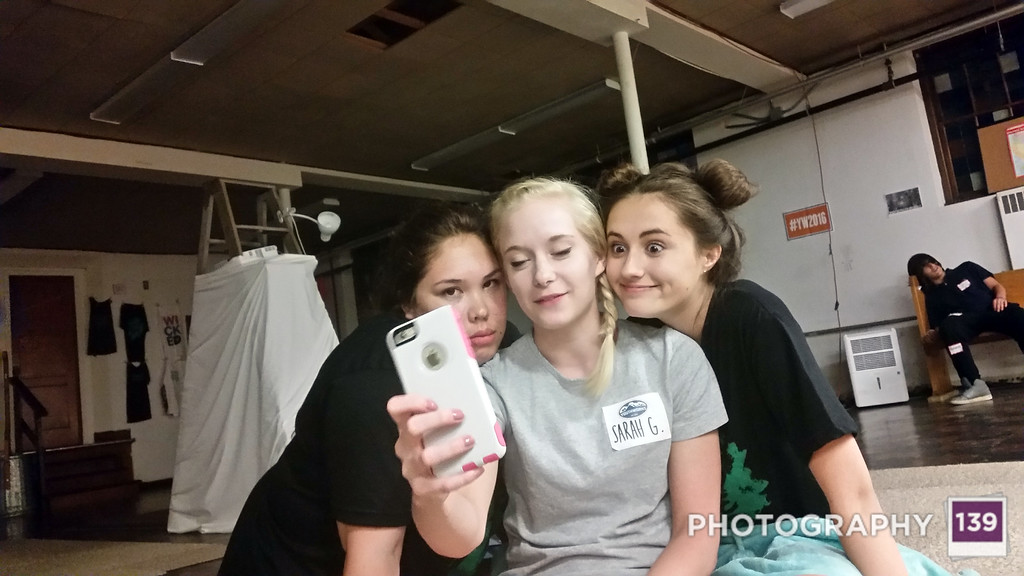 Wonder what you look like when you are posing for Snapchat filters? Alisa, Sarah, and MacKenzie demonstrate.

Wednesday night’s activity was serving a soup kitchen in the church where we were staying. This was kind of a disorganized mess and there were some moments that were awkward where some of us ate before the community members that needed this meal. In the end though, even out of this mess, good things happened.

Andy had met a homeless man outside of the church on Tuesday night and invited him to come to the soup kitchen. The very short version of this story is that he came and he and Andy made a connection. There is so much more to that story. Ask me directly, but be warned, you may have opened up a bottle that you can’t put the cap back on. I love talking about the Mission Trip. Even though people don’t get it.

Following the church supper, the kids on the mission trip put on a worship service for the community. One of the highlights of this service was our Anna giving the sermon. Even if I wasn’t impartial, I would think she did an amazing job!

Obviously there is more to that story, but once again, ask directly. 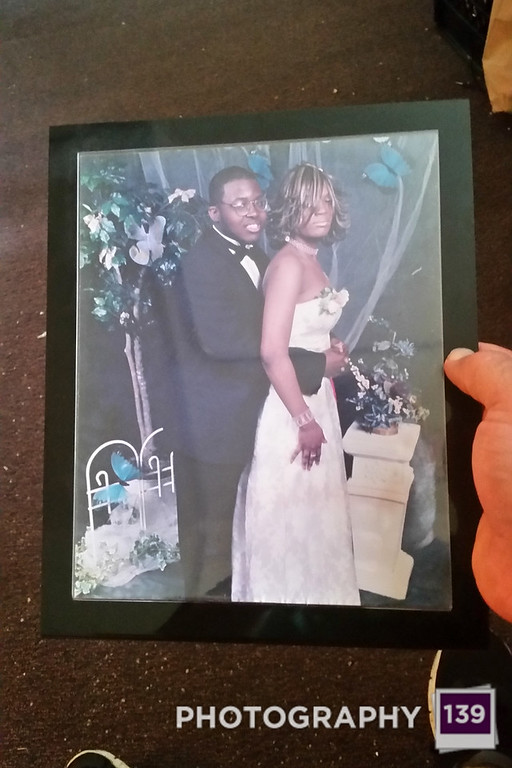 Cornelius’ Prom picture. Yes, Cornelius has his prom picture at work. Yes his date looks pissed. The story is that shortly before Prom, his date got into a car accident. She was in pain and didn’t want to go. Cornelius made her go. Why? “I had already paid for the tickets!” Then when his boy got dissed by his date and he spent the night hanging out with him. I don’t want you to think poorly of Cornelius. He was a good dude. He was however a terrible Prom date. 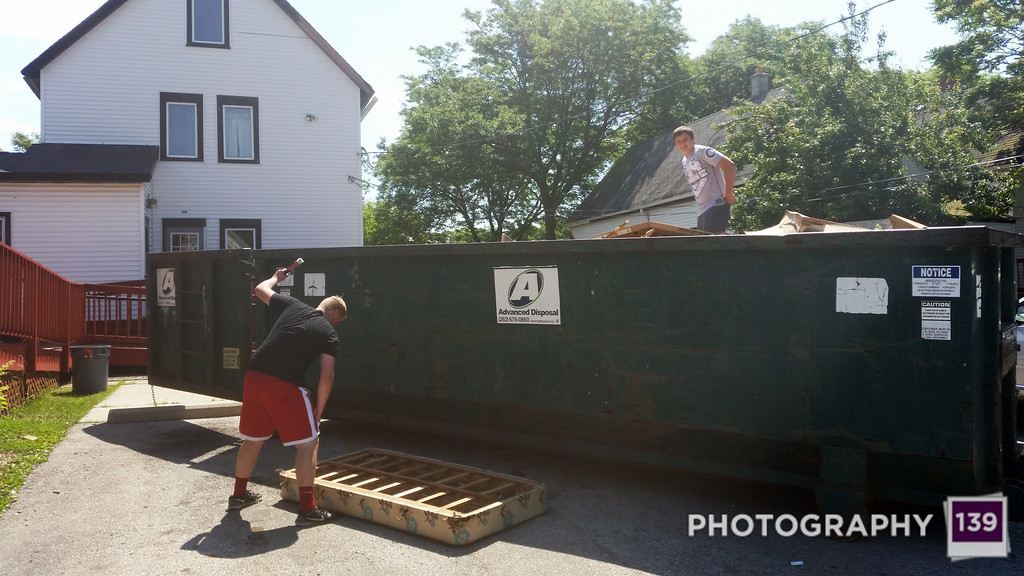 On Thursday, they found a job the kids loved! Crawling around in a dumpster and destroying things. 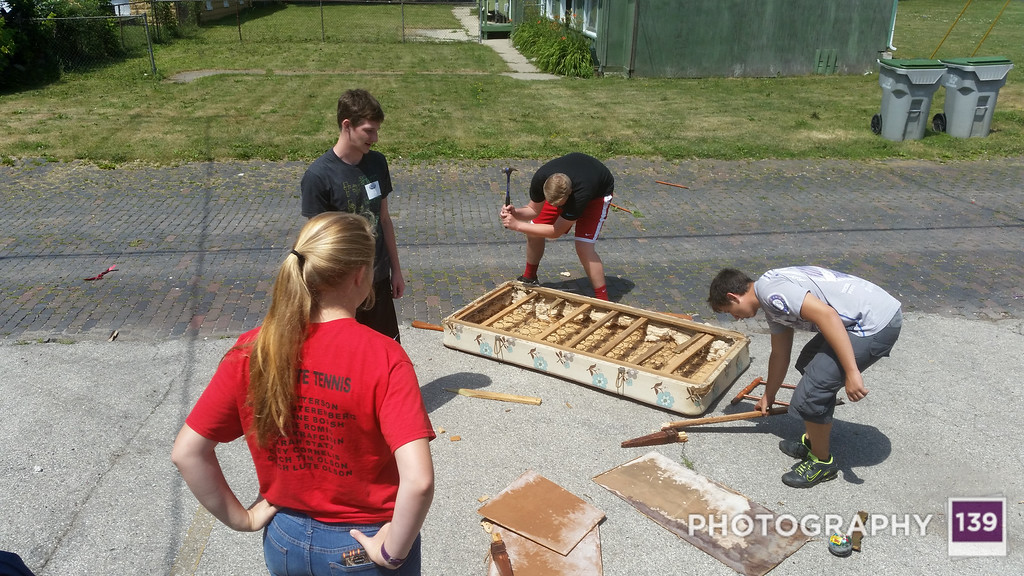 Cordelia telling her story. Cordelia has been on Oprah and whatever show Al Roker is on.

This tree stands where a drug house used to stand. When they tore the garage down, they found a dead body in the basement. The body was never identified, so they planted this tree in that person’s memory. 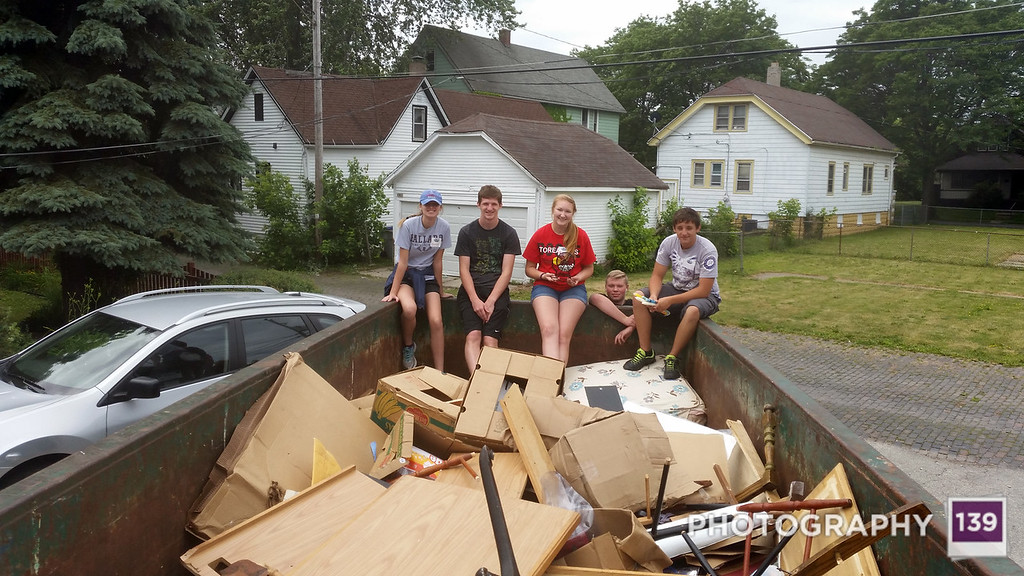 They love their dumpster!

Posing with Cordelia before we left. 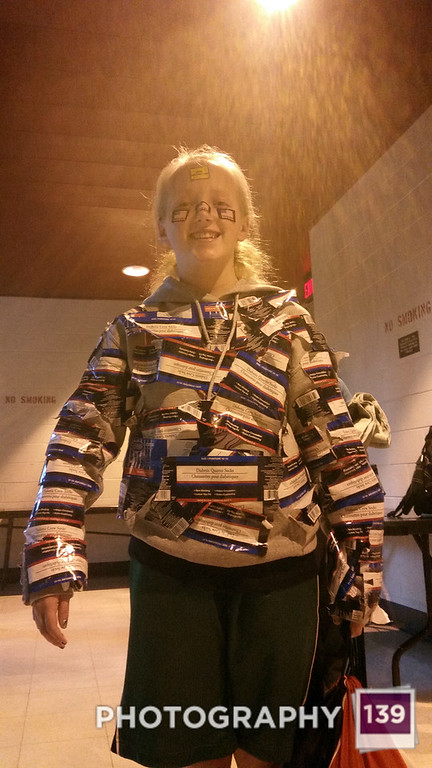 I’m not sure what happened to Autumn at her work site.

The Thursday night activity was a community dinner at Adullam. 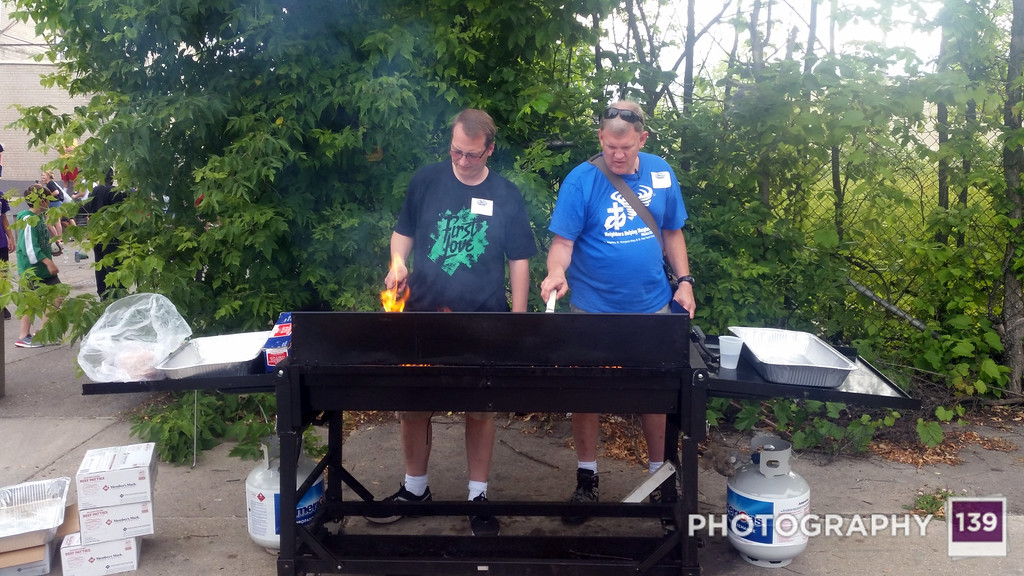 Ray and Scott manning the grill. 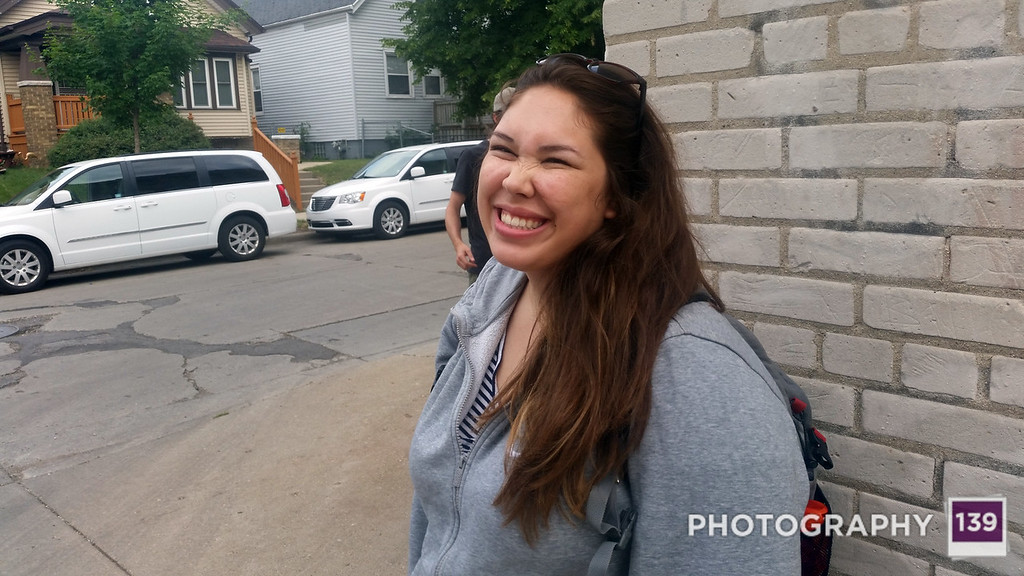 Alisa. Not really sure what she is doing. 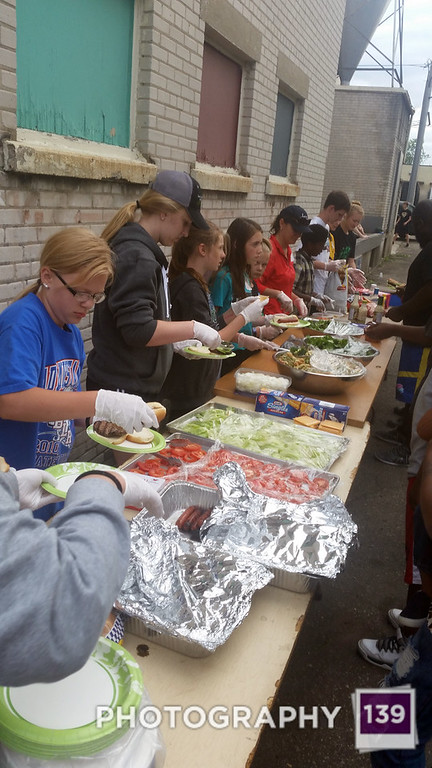 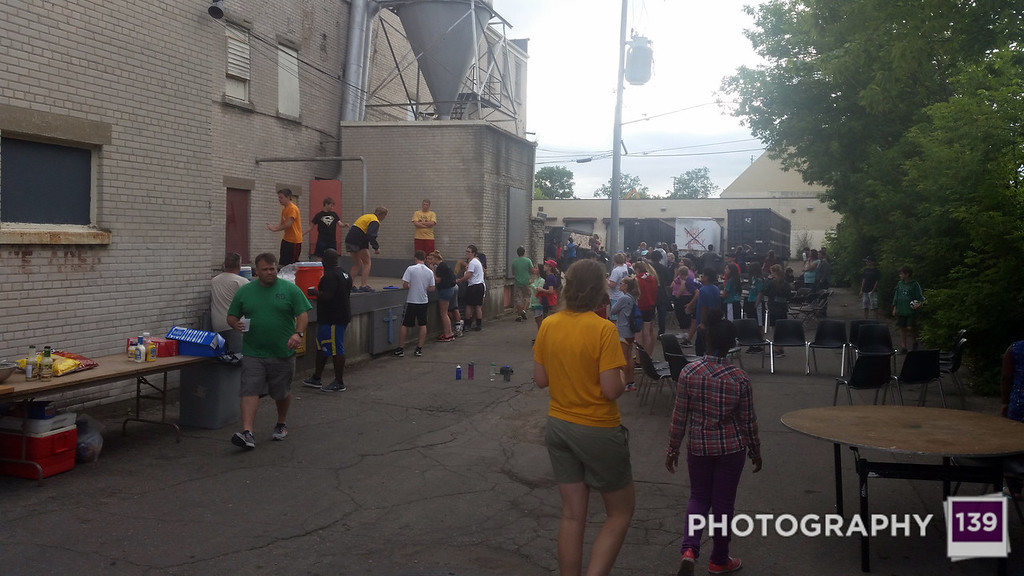 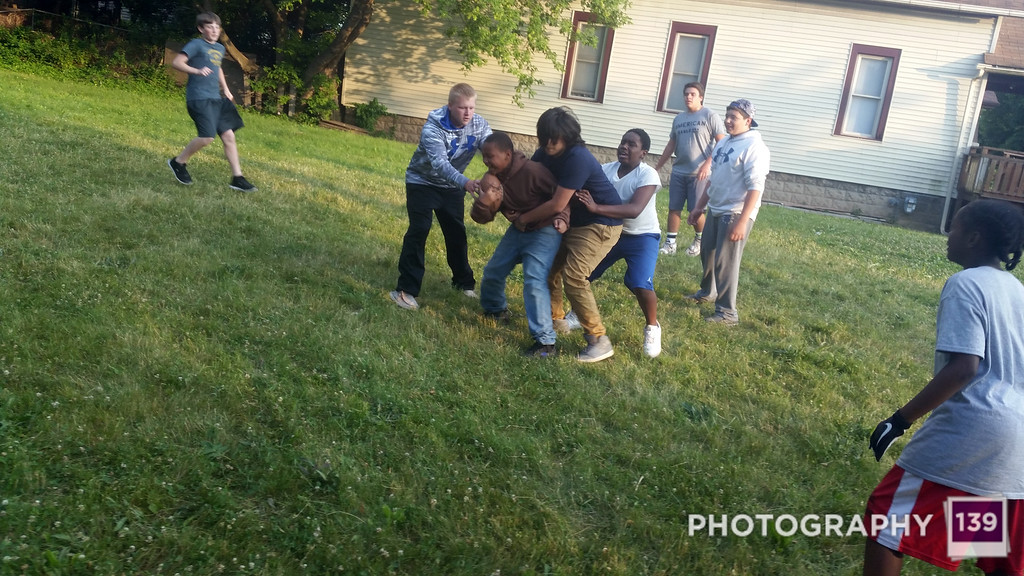 One of the most violent games of tackle football I’ve ever seen/dominated. Nate (making the tackle) laid a kid from another church out.

Dante running with the ball.

Note the kid in the brown sweat shirt.

This is a story I didn’t tell when our group gave the sermon on the Sunday after we returned to normal life.

I was talking to Dante and the kid in the brown shirt (and I hate the fact that I can’t remember his name) while we were eating. Our conversation ranged from our mutual hatred of the Packers to NBA free agency to their school. They attend Barack Obama School.

I asked them what they thought of Barack Obama. They thought for a second and said, “I don’t know. I’ve never met the man.”

“Well what do you think of the current presidential candidates?”

The kid in the brown shirt immediately said, “Donald Trump can suck a big one!”

Then he looked me in the eyes and said, “You know what I mean!”

I laughed for quite a bit and then leaned in and said, “Off the record.” I gave him a fist bump. “On the record, you probably shouldn’t talk like that.”

That is why I’m a great missionary. Right?

That is all the photos I have, but I have so many more stories. I haven’t even touched the trip to the Emergency Room, the sorta love triangle, the “leader” from Kentucky, or the friend I made at the Soup Kitchen.

Like I said, track me down. I love to talk about the trip. Even though sadly, it was Alisa’s Swan Song. Even though we might not work together doing God’s work for the Boone First United Methodist Church, I know that it won’t be the last time we will work together in this vein.

One last thing. Alisa asked me at both church services, “Explain why you are willing to give up a week of vacation to go on these trips? Even though people throw you shade for it.”

Twice I gave poor answers. I’m working on that answer, in case she asks a third time.