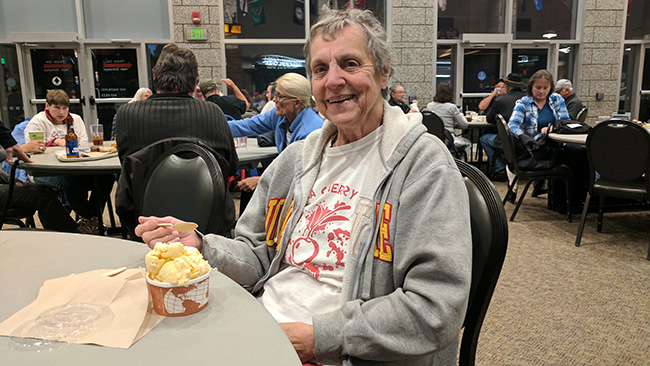 Now that I’ve been back to reality for 7 days, probably a good time to go over my vacation.

Breakfast at Legal Limit with Mom.
Photography for Amber and Steve’s Wedding.

Went to the Lutheran Church in Gilbert with Jesse and Nader to celebrate Nader’s 30th year in the United States.
Ate lunch at the church with some of the people that helped Nader when he got to the country.
Went to Gene’s farm to admire his car collection.

Sent this picture to Russell of Youth Nazis harassing this old woman.

Sent this picture to Logan because he sent me a picture trying to make me jealous of his lunch.

A Studebaker with an El Camino back. 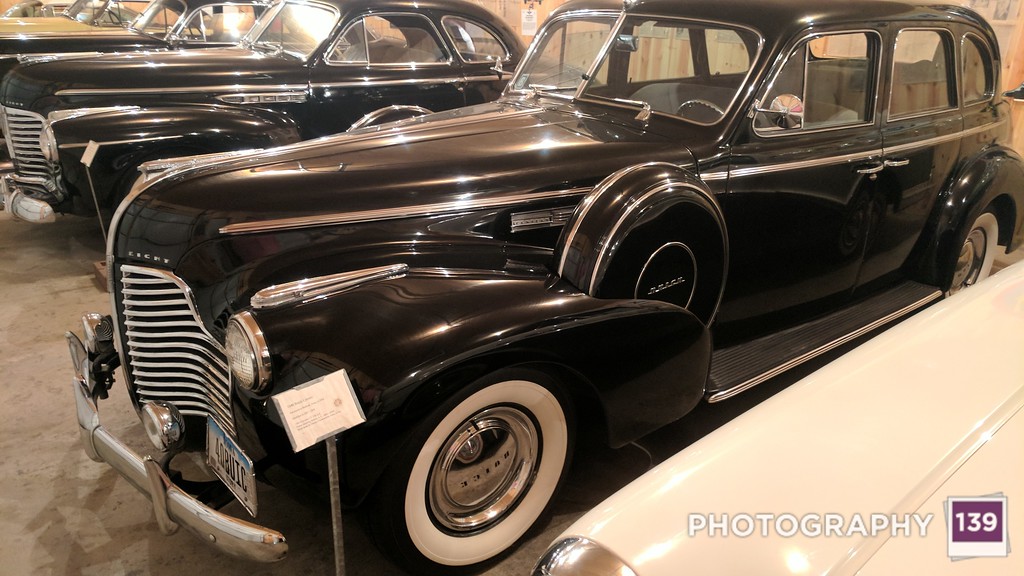 Naima getting her pills.

Went to the Boone & Scenic Valley Railroad and Shorty was there working it. 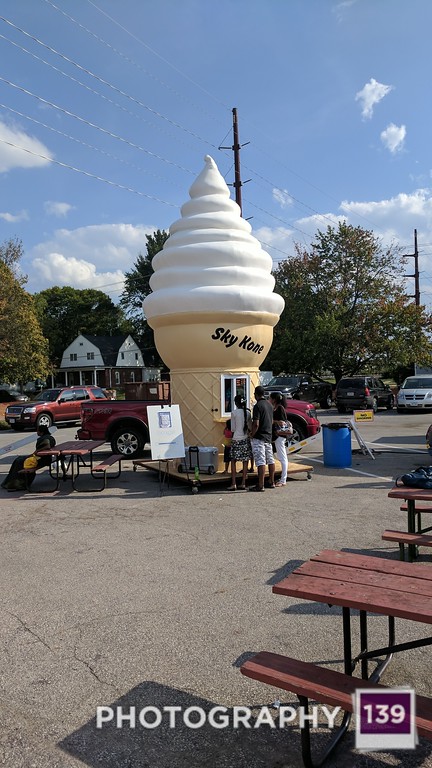 While this food stand looks awesome, the ice cream isn’t that great.

Loaded up Mom’s car and headed for Mount Rushmore.
Stopped in Sioux Falls for gas, human fuel, and Falls Park. It rained all the way to Sioux Falls.

Sent this picture to Jorge and Joe to remind them that I wasn’t at work. 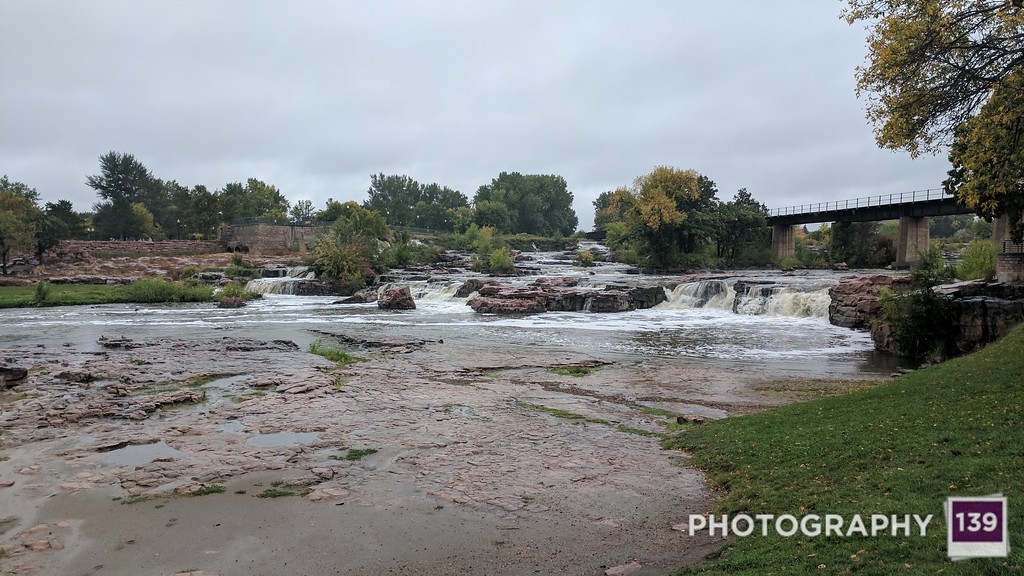 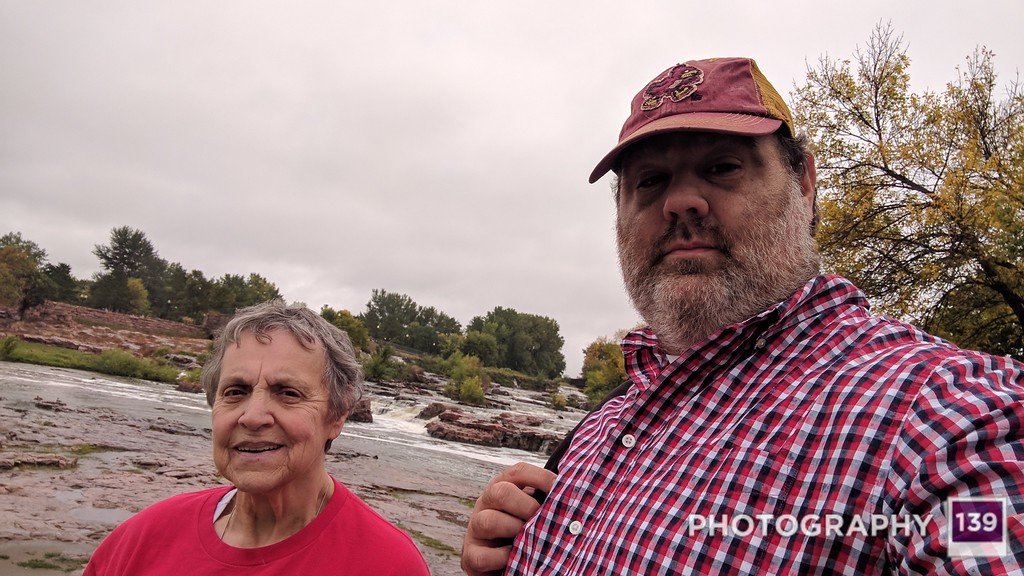 Mom struggles with the selfie concept.

Confused by the bridge they built to seemingly just to wreck the view. 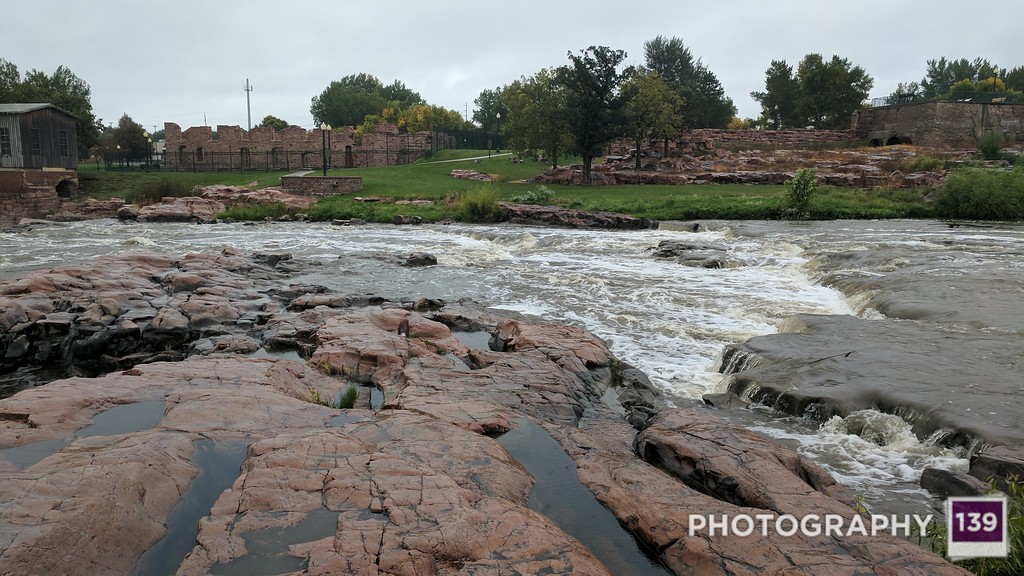 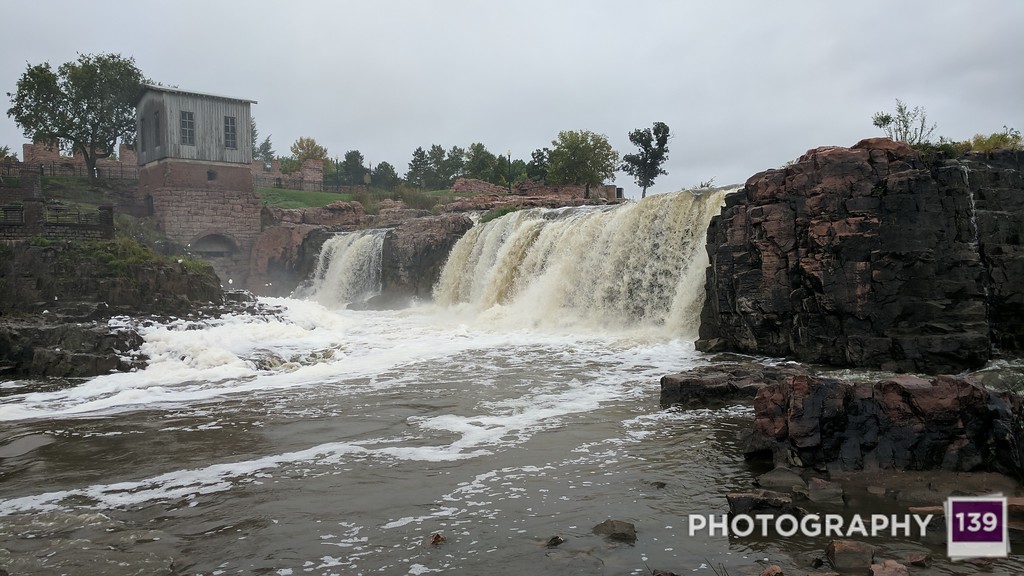 I wonder what this picture would look like with me in it.

I give Falls Park the thumbs up. I’ll have to go back when I have more time at some point.

Stopped for gas again next to 1880 town. 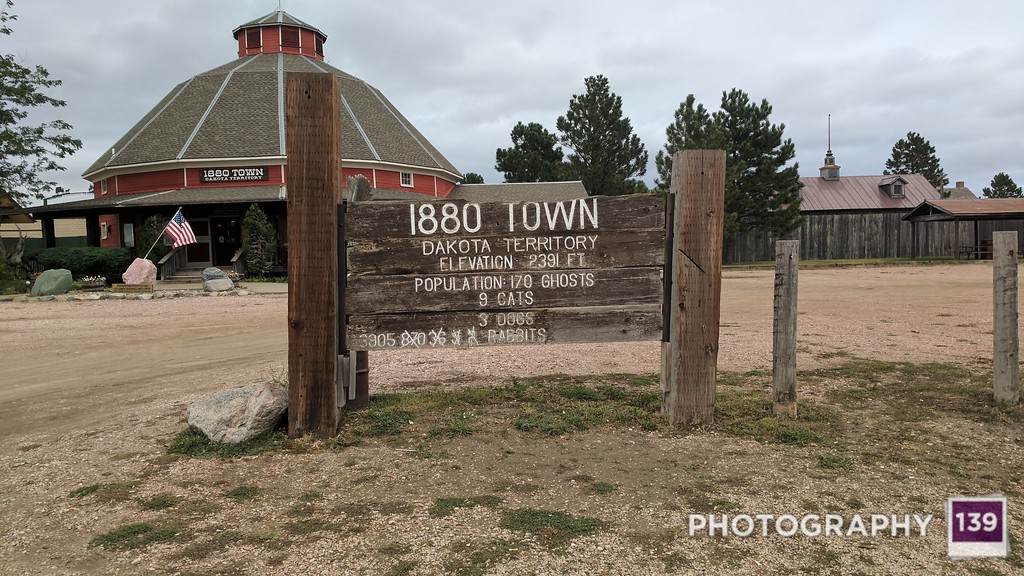 Stopped at Wall Drug right before it closed. 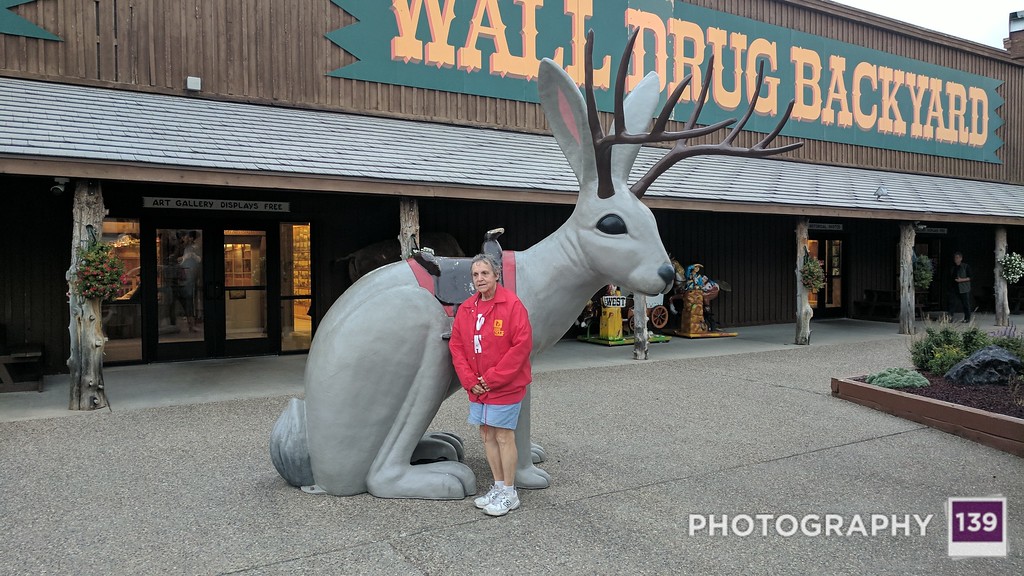 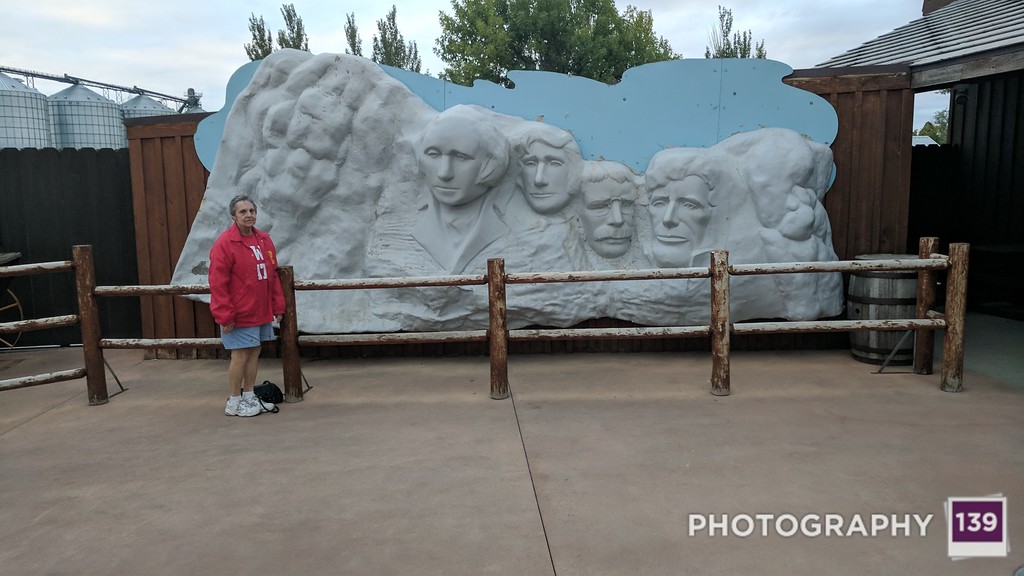 Still don’t have the selfie thing down.

Pretty horrible restaurant across the street from Wall Drug.

I’d give Wall Drug the bird. Don’t waste your time. A bunch of touristy garbage with ridiculous hours.

Got to Rapid City and checked into a hotel with free WI-FI and continental breakfast.

Got up in the morning and ate continental breakfast at the hotel. Had a lengthy conversation with two women from Arizona that came up there for the Buffalo Roundup.
Left for Mount Rushmore.

View from the parking lot. 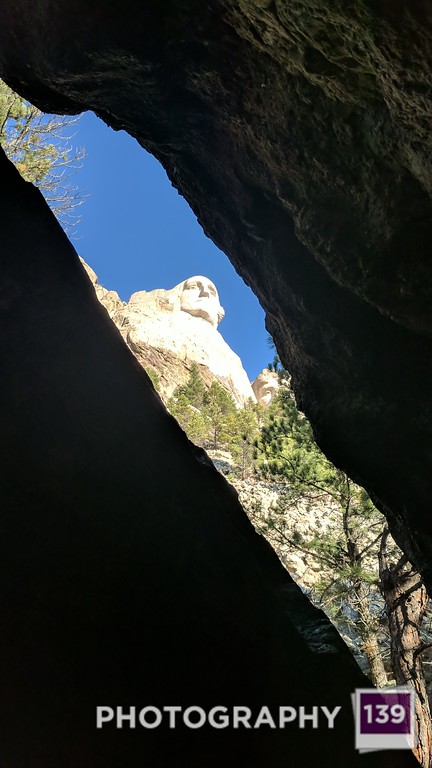 One armed woman took this picture for us. 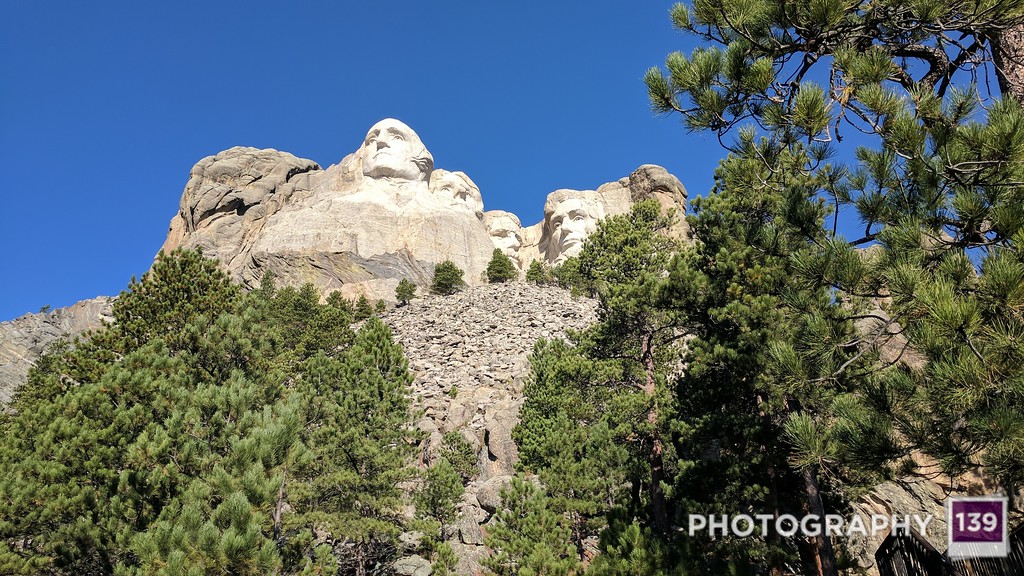 Getting better at the selfie game.

What Mount Rushmore was supposed to look like, but they had to stop because of WWII. Another thing we can blame on Hitler.

I give Mount Rushmore the thumbs up.

At the base of Mount Rushmore we ran into Brad Dighton. The cousin of a member of my church. He gave us several pro tips for the area. We weren’t able to get to all of them, but maybe next time.

One of his pro tips was take the Iron Mountain Road to Custer State Park.

All of these tunnels point back to Mount Rushmore. You can’t tell in the picture, but trust me.

I give the Iron Mountain Road the thumbs up.

Custer State Park is a great example of white privilege. I have no clue why a park is named after Custer. His 2 claims to fame are graduating last in his class at West Point and then getting his buttocks handed to him at the Battle of Little Big Horn.

Custer Park (like the man) was more hype than pay off. We were told we would see hundreds of buffalo. We saw one. That being said, the feral donkeys and the prairie dogs made up for the lack of buffaloes. 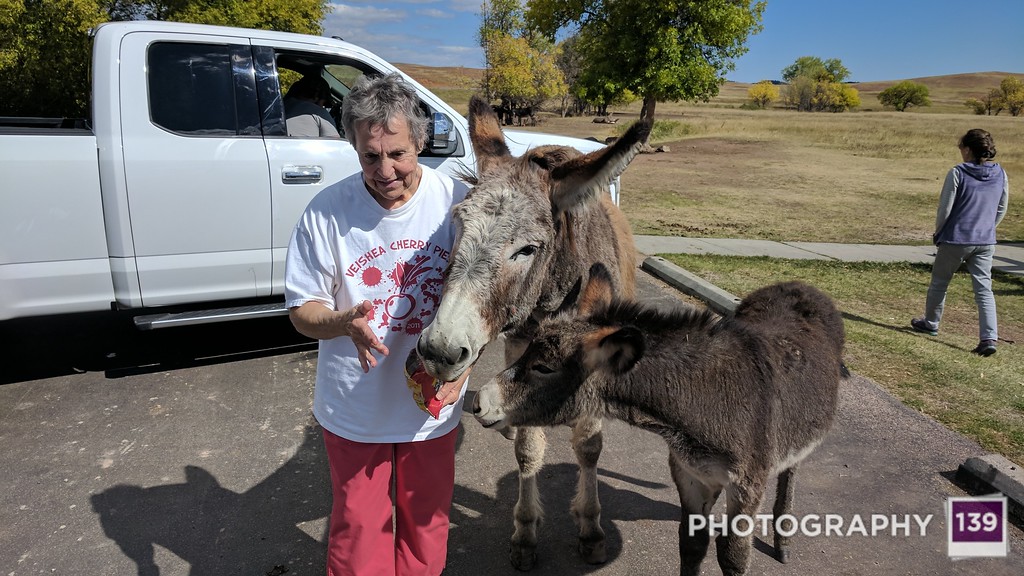 I give Custer Park a thumbs up, but it didn’t live up to the hype.

After we left Custer, we went to Needles Highway. 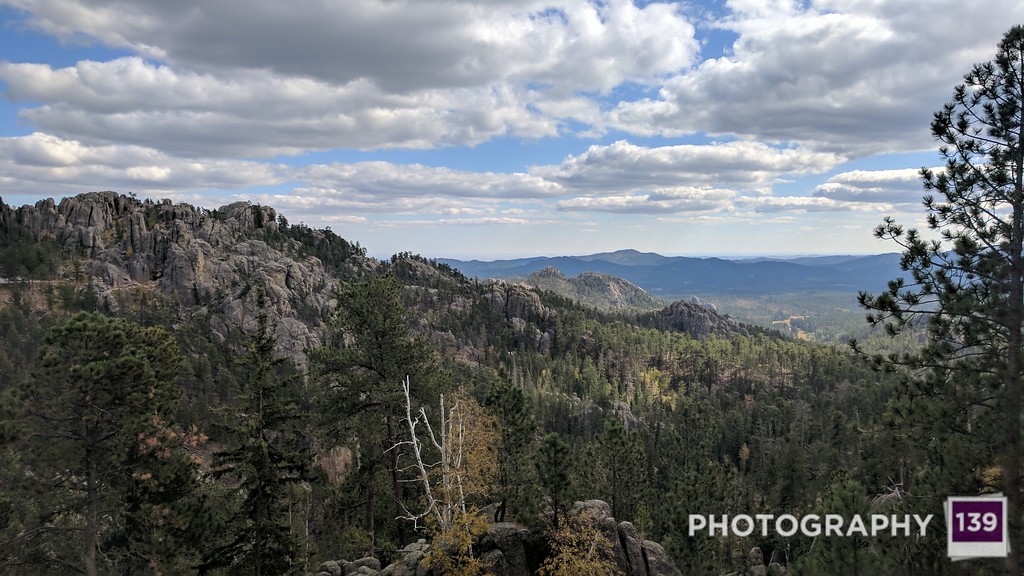 Still working on the selfie game.

We’re starting to get there.

Needles Highway is a road about the width of McHose Park road, but with a 400 foot drop to your death on one side. It is amazing!

I give Needles Highway a big thumbs up!

After that we went to Hill City to eat lunch/dinner at a place recommended to us by Brad Dighton. That place was closed, so instead we dined at the Hill City Cafe. 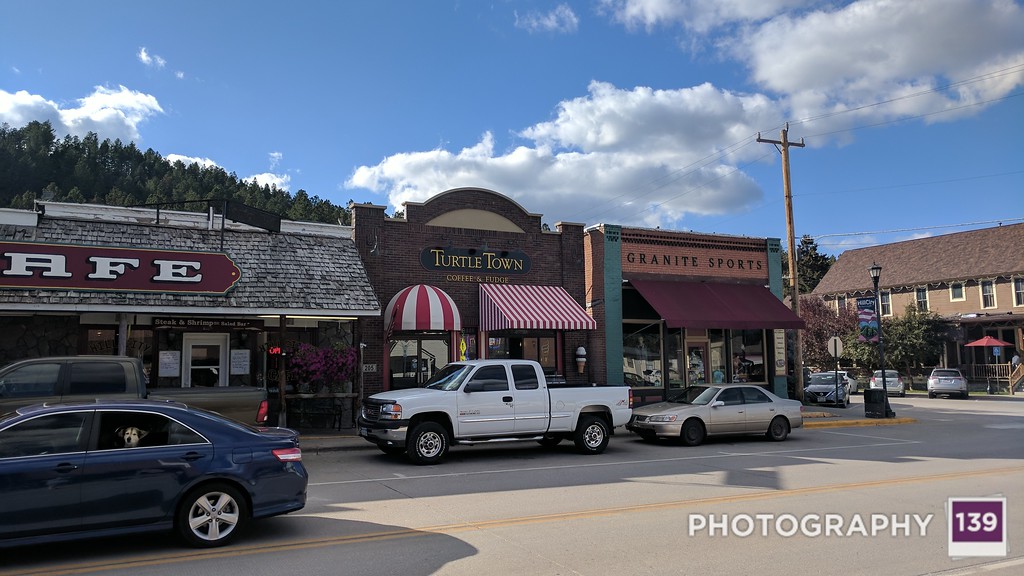 We bought fudge there.

Hill City Cafe wasn’t terrible, but it certainly was not great. Thumb sideways.

After that, we went to the Crazy Horse Memorial. 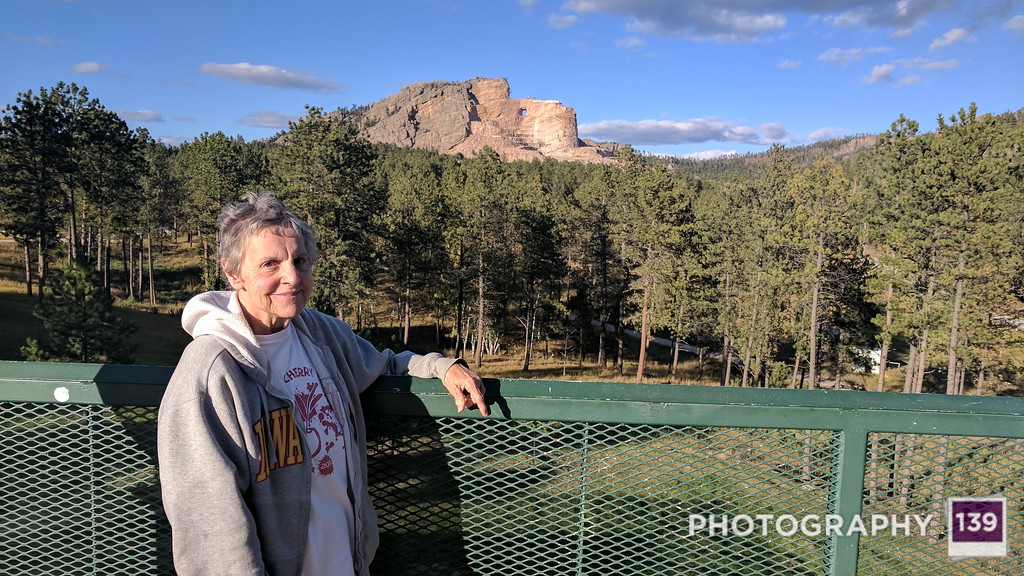 We might’ve regressed on our selfie game.

I’d give Crazy Horse another big thumbs up! My only complaint is that all the information seems to be on the family carving the memorial and hardly anything on Crazy Horse himself. You know, the guy that ripped Custer’s buttocks off and handed them back to him. He took out Custer’s brothers while he was ate it. Crazy Horse was an OG.

After leaving Crazy Horse, went back to Mount Rushmore for the lighting ceremony. 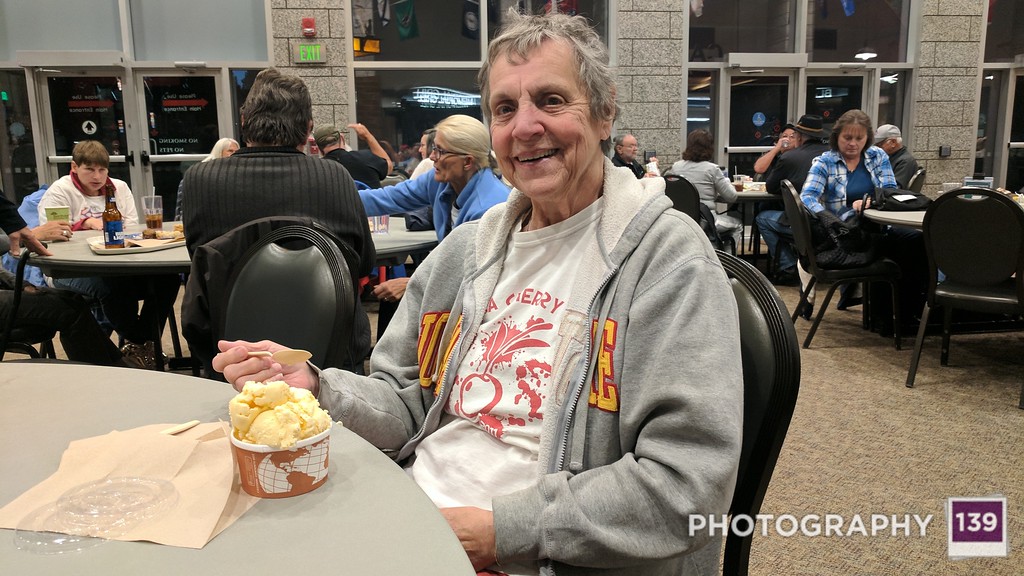 Paid and extra dollar for the Thomas Jefferson ice cream.

The lighting ceremony kind of drags on for awhile, but the part where they bring veterans on stage and take the flag down is powerful. While waiting (forever) for them to light up the mountain we became single serving friends with Lance Young. A former Iowa State wide receiver that played in the Dan MacCarney era.

After the lighting we went back to Rapid City and crashed.

Got up in the morning and hit the continental breakfast. Hard. Going home day. No time for single serving friends. Ate and hit the road.

Still working on it.

I think we have it. At least we’re in striking distance.

Taken by a woman who was friendly, but strangely afraid of falling down the side to her death. She has no future as a Photography 139 Assistant!

“I’ll take one to the side and one of you in the middle.”

Not afraid of the edge. Pimp.

Badlands. 2 big thumbs up. They just need to work on their rattlesnake game.

Next stop on the way home was to see the Dignity Sculpture. It looks like the Big Jesus in Sioux City, only less creepy. I don’t have a picture with the cell phone, but when I unleash the camera pictures, there is one there.

The next stop was Mitchell. I was going to avoid the Corn Palace but it just lined up with when we needed gas and human fuel. 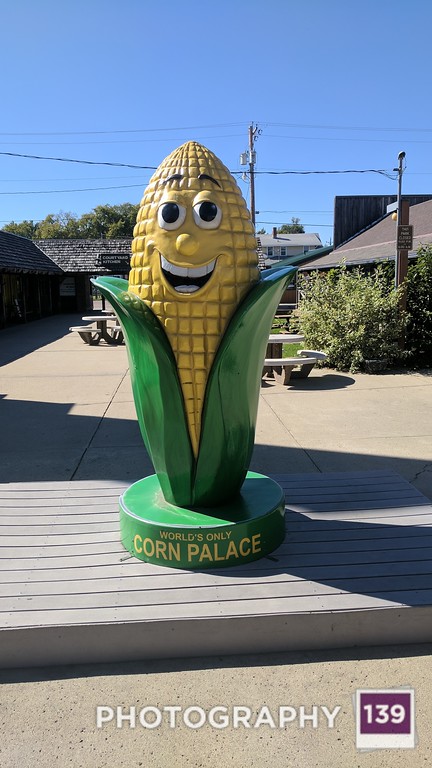 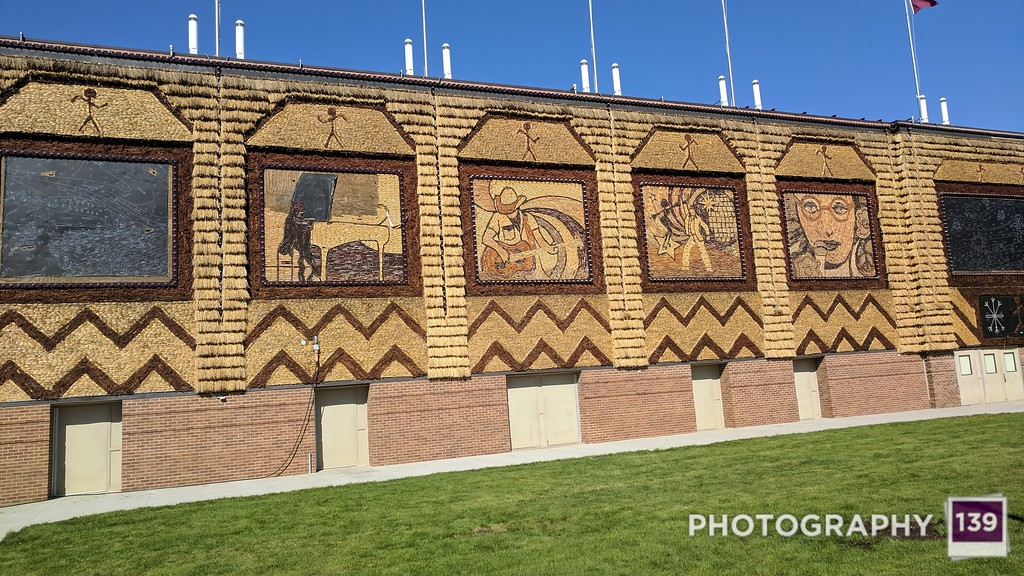 SATURDAY NIGHT FEVER in corn. Well, I can’t hate that.

Mic Drop! I think we finally nailed it!

Last time I went to the Corn Palace, I gave it the bird. I’m going to upgrade it to just a thumbs down. It is worth seeing, if you don’t waste time going inside.

We stopped at a place called The Hungry Dog for lunch.

The Hungry Dog was by far the best eating experience of the trip. 6 out of 5 Stars!!! It only seats about 5 people on the inside and after the only employee took our order, made our food, and delivered it; she locked the door and told us she’d be right back. She had to go pick up her kids from school.

I loved every second of my experience!

On the way out of town we saw this Albert the Bull wannabe. Jason Baier will get that joke.

The last stop of the evening was in Jefferson for gas and human fuel.

I wish so badly we had this sign when I worked for the evil clown empire. I can’t even count all the times some dirty white trash blew cigarette smoke in my face as soon as I opened the drive-thru window.

Then home for sleep.

Did not much in the day. Hung up a bunch of pictures in my bedroom. Cleaned out the guest bedroom now that Alexis has moved out.
Picked Derrick up for the Iowa State game. 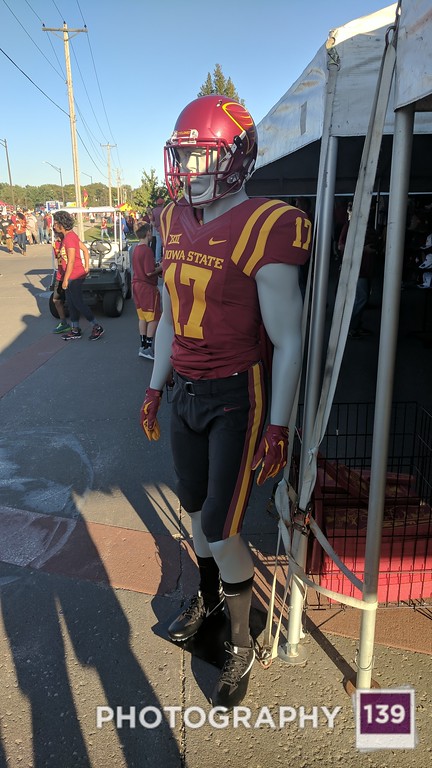 I don’t care what anybody says. I love the new Bugle Cyclone secondary logo.

Well almost everything about that game sucked, except the company.

I can’t remember next to anything that happened on Friday.
I visited Scottie D. to get a yard sign. He is running for City Council for Ward 5.

Also had FNSC with Willy. Think it was at Jimmy’s Barbecue.

Don’t remember much about Saturday either.

Went uptown during YesterBoone to complete another page of the Photo Journal Project.

Sent this to Micky and offered to buy it in case he got shutout on his hunting trip in Wyoming.

Went out to McHose Park and with Jesse’s assistance completed yet another page of the Photo Journal Project. 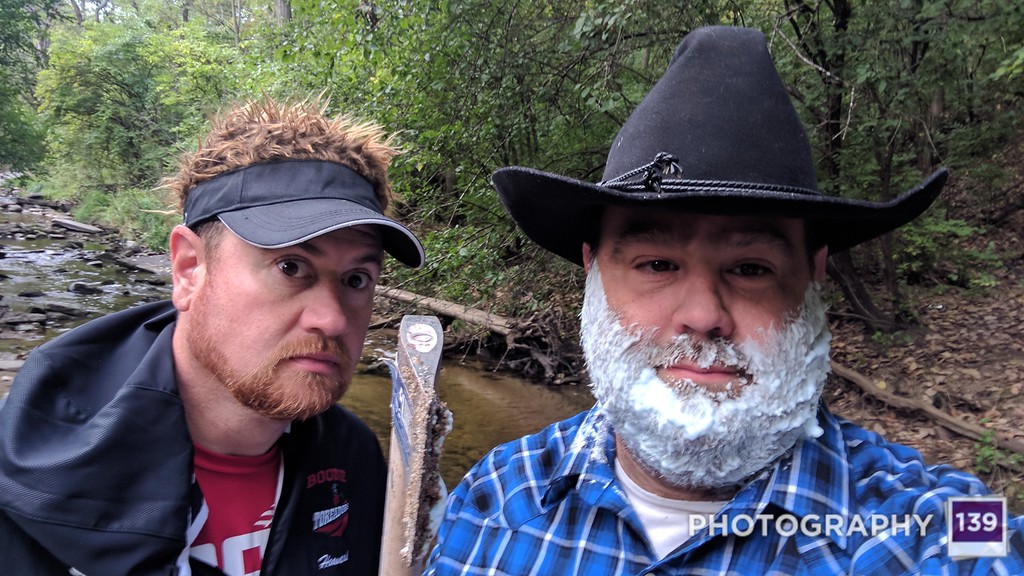 After that, we went to a Gender Reveal Party for one of the members of the Youth Group. It’s a Girl!!
Headed up to Jay’s for Chili Lab. Both Jay and Wily made great chilis and we enjoyed a viewing of KONG ISLAND.

Got up and went to church at Boone First United Methodist Church.
Then lunch with the family.
Meeting for the Council to Elect Degeneffe.
Then I went to the Freedom Flight Send-off to see Jesse’s Dad. 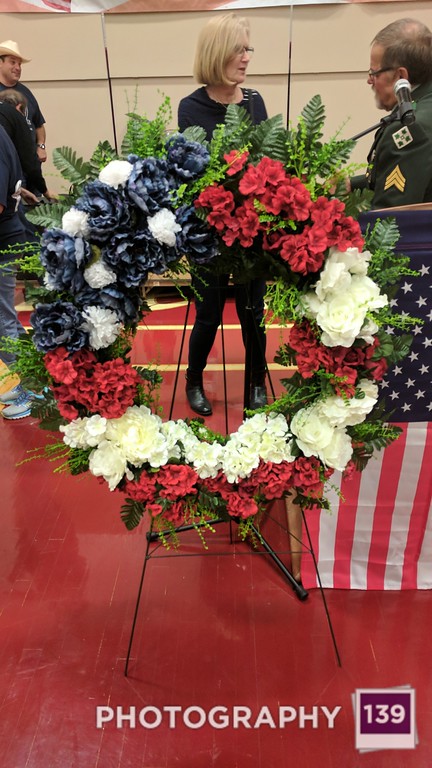 Monica’s mom made a bouquet that they took with them to place on the tomb of the Unknown Soldier.

Then I went home. Sat on my couch and soaked up the last few hours of vacation, before being back at the grind on Monday.

I’ve been back to work one week. Already fantasizing about the next time I dip my toes into the PTO pool.

8 thoughts on “Remembered with Nostalgia”