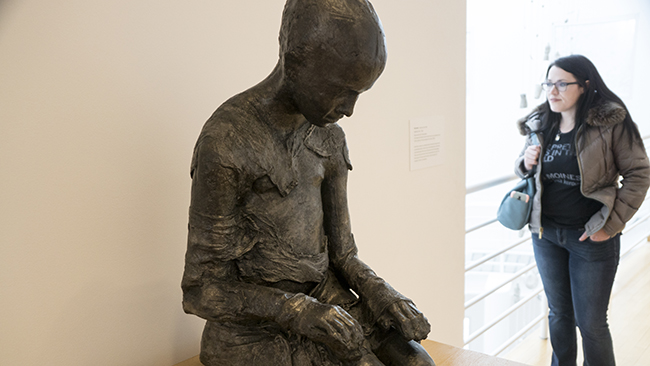 This was the 3rd or 4th time that we had tried to get together to visit the Des Moines Art Center, but something always seemed to get in the way. Made me think that the trip was never going to happen, much like Scottie D. and I’s next great tenderloining adventure to Winterset may never happen.

This trip to the art center ended up being kind of strange. Part of the way through the museum I started to sweat profusely and I was overcome with an overwhelming sense of hunger. We sat down for awhile and Suzie gave me a stick of gum. I felt better after a few minutes.

It was very bizarre. Not sure Suzie will want to visit the Art Center with me again at any time in the near future.

Here are a few pictures I took before my hot flash: This is called Klingon Mustaches After I felt better, I bid Suzie a fond adieu and then headed to the March for Our Lives via quick pit stop at Ted’s Coney Island.

So I had an amazing day today. On a couple of strange fronts I had some new knowledge dropped on me and I’m still reeling from the info.

Today was the Methodist Men’s Annual Chicken Noodle Brunch. While we were taking a break from our arduous labor, I asked Kio if he had seen why Jefferson, Iowa was in the news this week.

Kio is a top dog at the Boone Area Humane Society, so I was referring to the story that was on the news about Jefferson coppers catching feral cats and then busting a cap in them.

Kio has unfortunately bought into the massive misinformation campaign to paint me as a cat hater. When in reality, I don’t hate cats. Cats suck and I report the facts. I don’t get any joy in this truth.

Because of his perception on my perception of cats, he thought I was going to push for Boone to follow suit with this efficient way to deal with an excess feline population.

However, all I really wanted to know is what the Boone Area Humane Society thought about this policy.

Now Kio can’t speak for the Boone Area Humane Society (okay, that is literally one of his jobs), but he can tell me what they do in Boone with what he termed “community cats”. Boone picks up these cats and makes sure they have all their shots and then microchips them, so they can track them. Then they return them to the neighborhood where they were trapped.

I was literally shocked to find out that this was happening. Boone has community cats.

Kio gave me the rough estimate that there are in the ballpark of 25 of these community cats in Boone. They are all registered, but he did not know whether or not the public had access to this registry.

I’ve had a few cats show up in my neighborhood and I had them dealt with before they could have an adverse effect on my property value.

However, I had no clue that some parts of Boone have sanctioned cats just strolling around.

I have decided that if I ever move, I will be finding out about how to check out this registry to make sure there isn’t one of these community cats in the neighborhood of a potential new home. Much in the same way that I made sure there were very few rental properties in my neighborhood when I bought my current homestead.

I now know the purpose and the story behind “The Shrine” between Boone and Ames. If you don’t know about “The Shrine”, it is a mysterious building on a country road between Boone and Ames, built by a guy that is known to run gawkers away from it. It is a source of frequent internet speculation and sometimes “investigative journalism” by local media outlets. It has its own thread on Reddit.

I have my information from a high placed source. While I would tell you what it is, I don’t want to ruin the mystery for you.