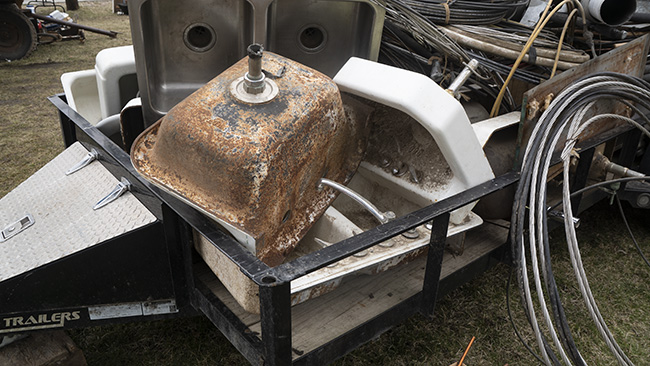 This is one of probably 2 entries for An Artist’s Notebook about my Saturday morning last. This is about the later part of my morning, but you must know a little bit about the early morning to understand how this strange turn of events happened.

The earliest part of my morning was spent at Dickcissel Park with Naima. Things there went slightly sideways and I ended up having to be late for my normal Saturday morning breakfast with my Mom. We normally breakfast at The Whistle Stop Cafe because they have tasty pancakes (and I’m what you would call an expert on tasty pancakes #pancakelife), good service, and they are literally the only breakfast game in town since The Legal Limit shuttered their doors.

I mean, a person could lower themselves to eating at The Avenue of the Saints Cafe, but it is the answer to the age old question:

Is it possible to make something worse than Golden Corral?

Answer: Yes, The Avenue of the Saints Cafe.

The main drawback to The Whistle Stop Cafe is that it is tiny. There are maybe 4 booths, a couple of tables thrown up on the side, and maybe 10 or so counter stools. When we drove by the Whistle Stop Cafe, we were saddened to see that it was overflowing with customers. We needed a new plan.

We decided to head out to the Don Williams Clubhouse. It is about a 15 mile drive from Boone, but it served breakfast and it is under new management. We wanted to see if the new management has game.

The easiest way to get from the Whistle Stop to Don Williams is to head by Water Works and on past Fraser. However, on Wednesday night, Carla contacted me to let me know that there was a flock of swans (possibly) at the J. Carlson Wildlife area, between Boone and Ogden.

On Wednesday night I went out there and had a peek. It turned out that it wasn’t a bevy. It was a brief or a pod or a pouch or a scoop or a squadron. It was a group of pelicans is what I was getting at. On Wednesday I efforted to get a photo of them, but I couldn’t get a good angle on them.

On Thursday, I went back. They were gone. However, I did get a photo of an egret, so not all was lost.

On Saturday morning, I decided to take Old 30 to Ogden and then up County Road P70 to Don Williams to see if those pelicans had returned. They were, but none of that is important to the story.

Due to the chosen route, we picked up Carla and made our way towards breakfast.

On our way through Ogden, at the intersection of Old 30 and P70, we stumbled across a sizable auction. My people have auction in their blood from way back*. Possibly why I had a cousin once state:

I’m impressed how well you and your siblings turned out, considering the white trash you come from. #neverforget

But you know that he has the complete and utter moral ground to make statements like that. It isn’t like he ever ended up in prison or anything like that. I can’t hate.

While my tummy made the decision that we didn’t have time to stop at this auction at this time, there was little doubt that we would hit this auction on our way back to drop Carla off at her home.

Breakfast went fine. The new management serves a tasty breakfast. My one critique would be that portion sizes are somewhat small. However, the small portion sizes are reflected in the prices. The 3 of us ate breakfast for something like 18 dollars, American.

On the way back we stopped at the auction and this is where things got a little bit strange.

As I was walking around the auction, I noticed that some of the stuff seemed a little familiar. There was a Patio Pros (represent!) car in the driveway. There was a ton of plumbing and heating and cooling type stuff in the auction.

I began to suspect that this was an estate auction for Olivia’s Grandpa Dean. He passed away a few months back and I was a pallbearer at his funeral.

I saw Olivia’s cousin Jim there and approached him and he confirmed, this was indeed Grandpa Dean’s Estate Auction.

I took a few photos while I was there: 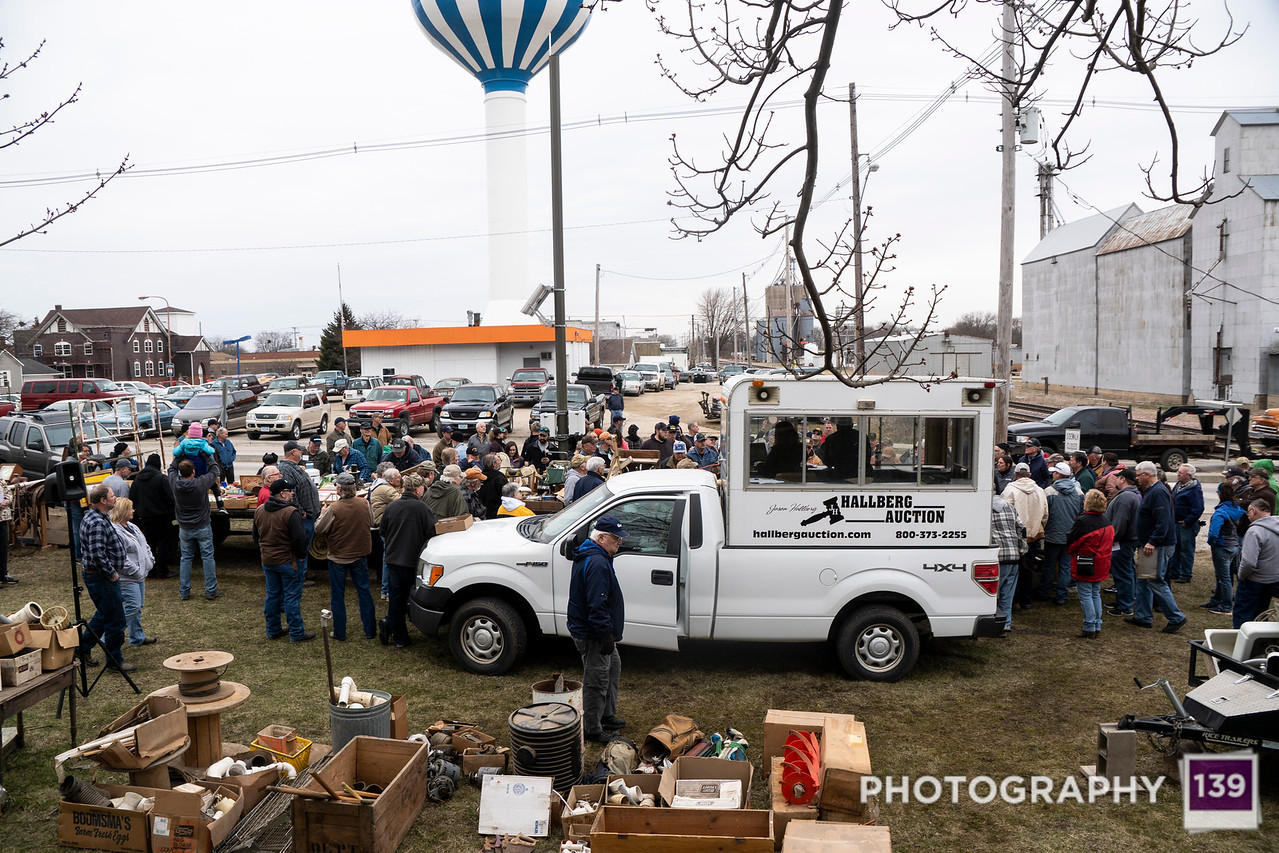 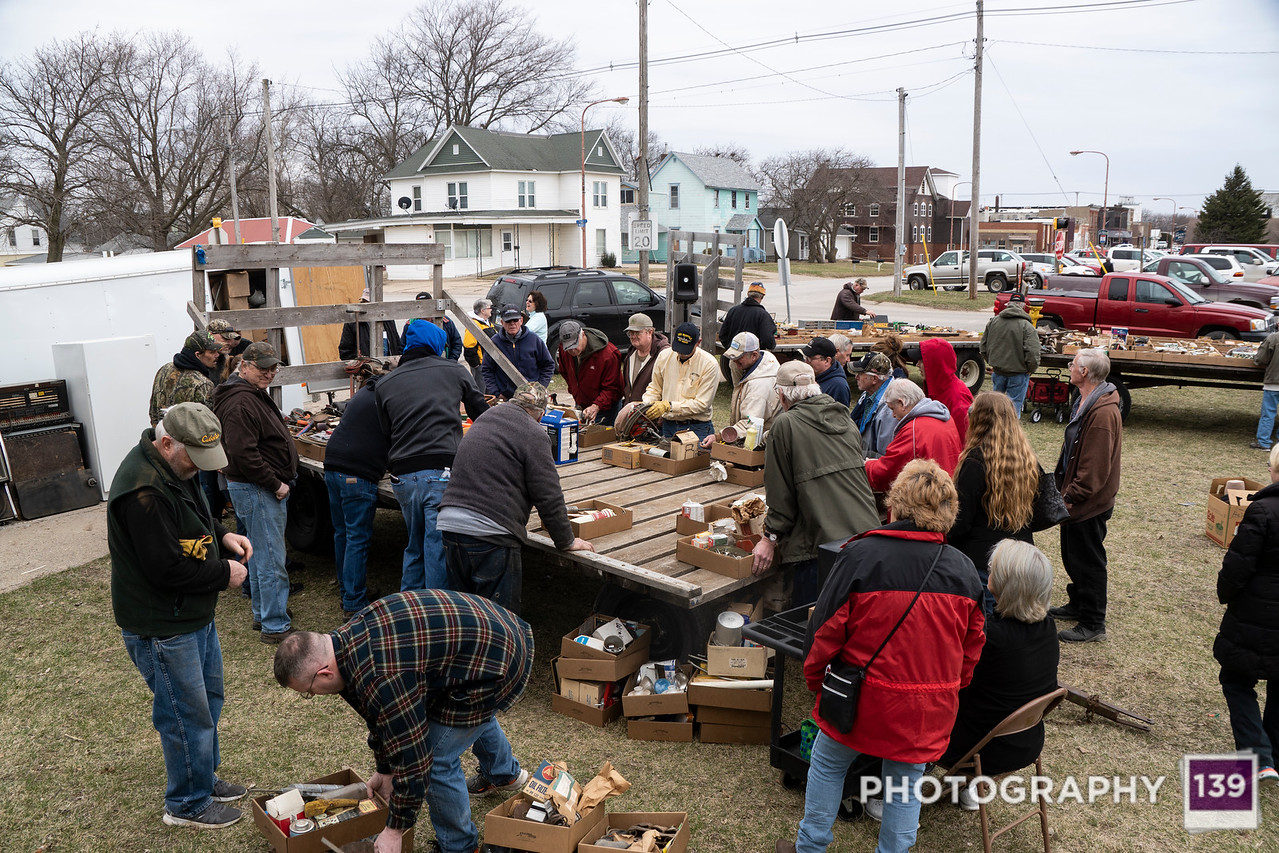 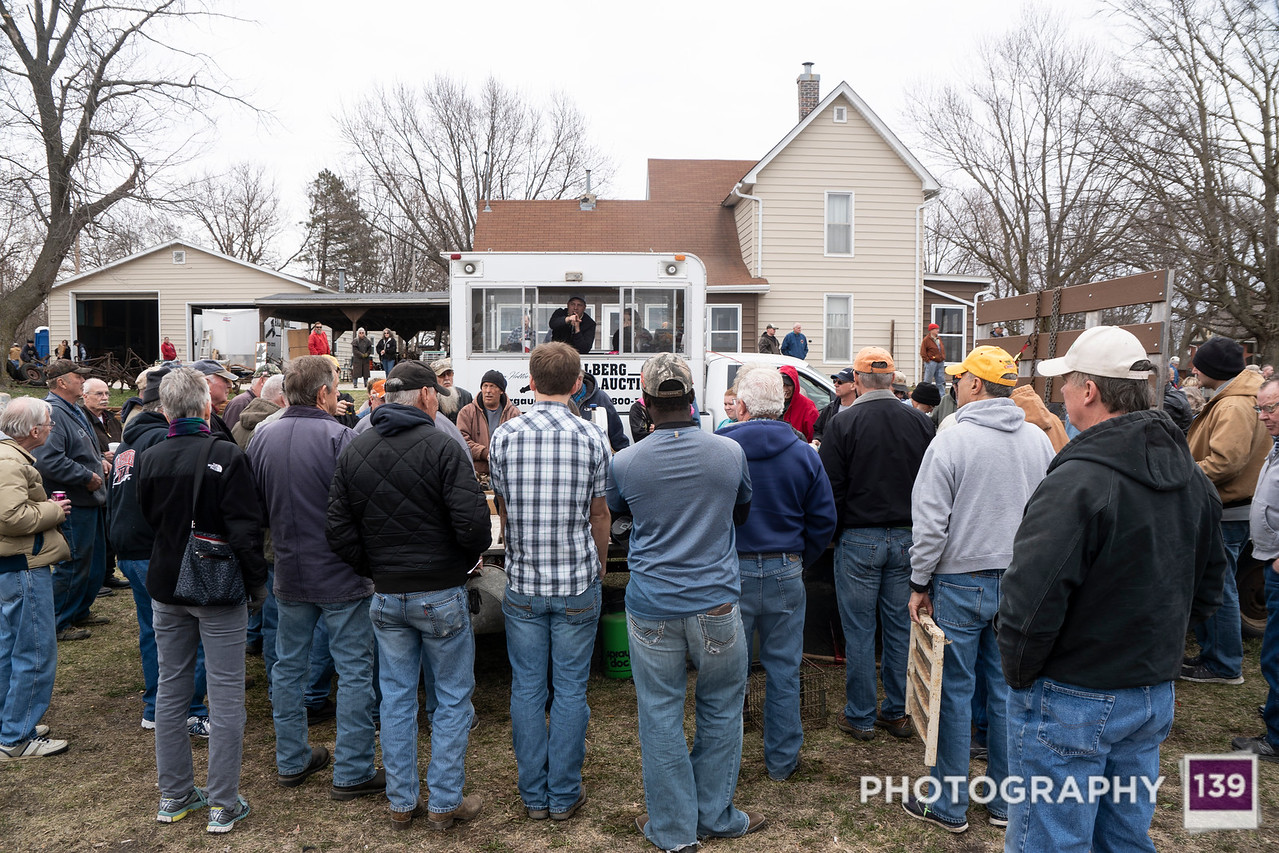 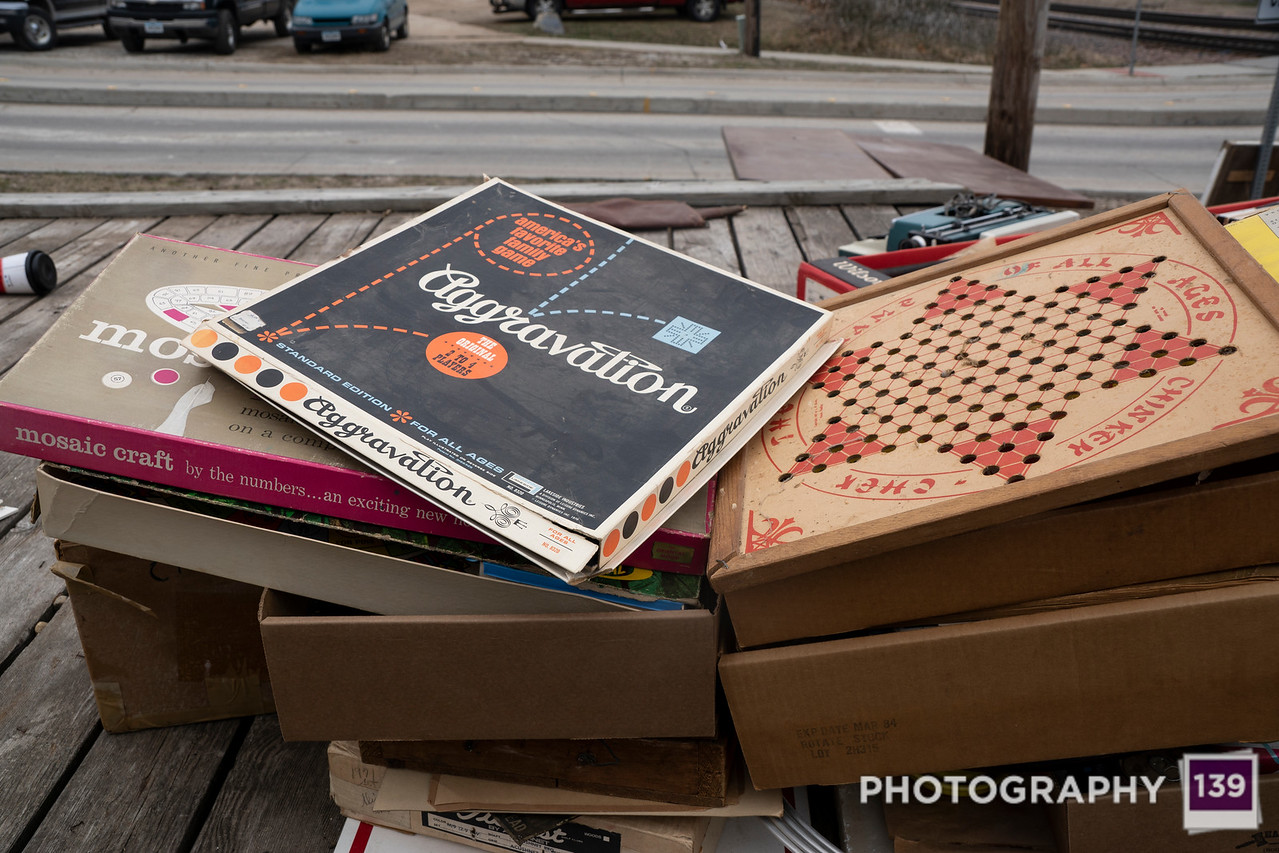 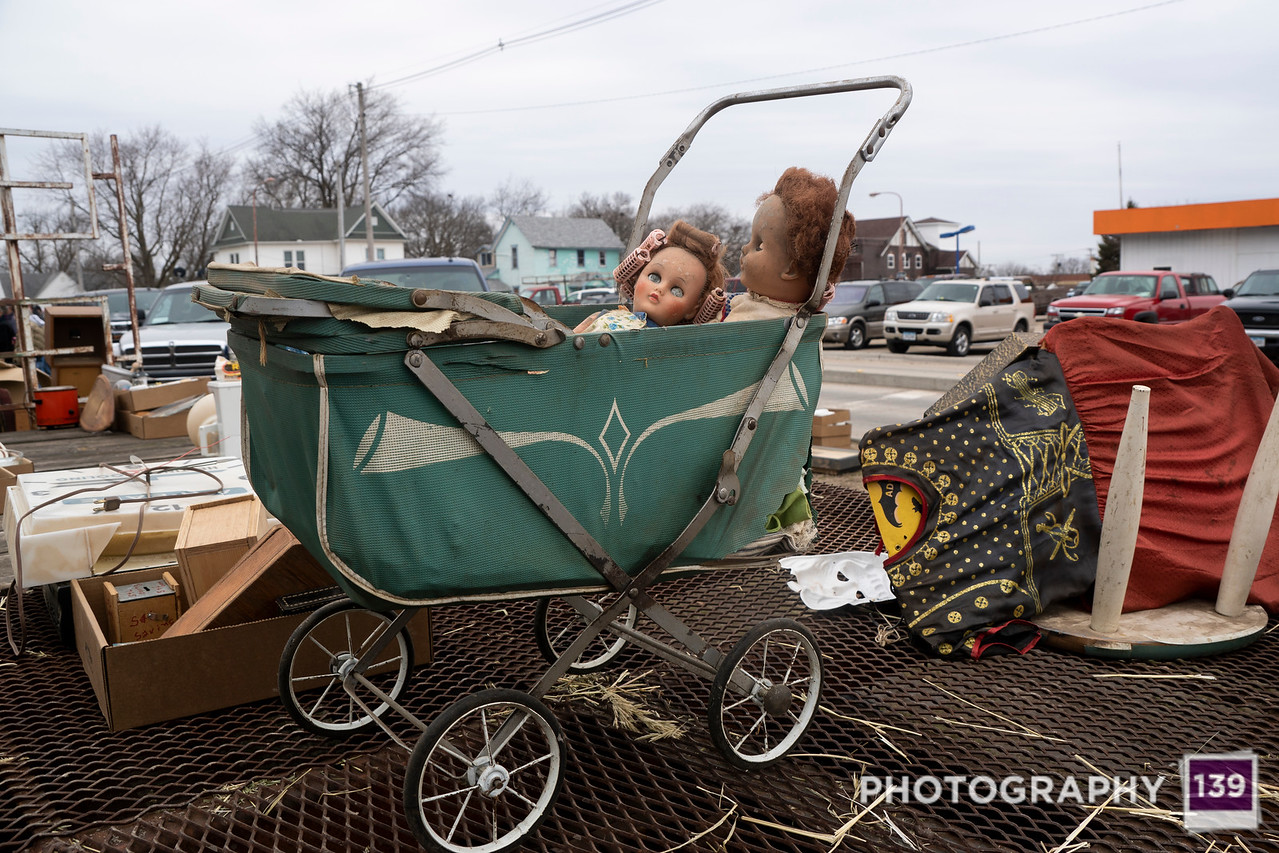 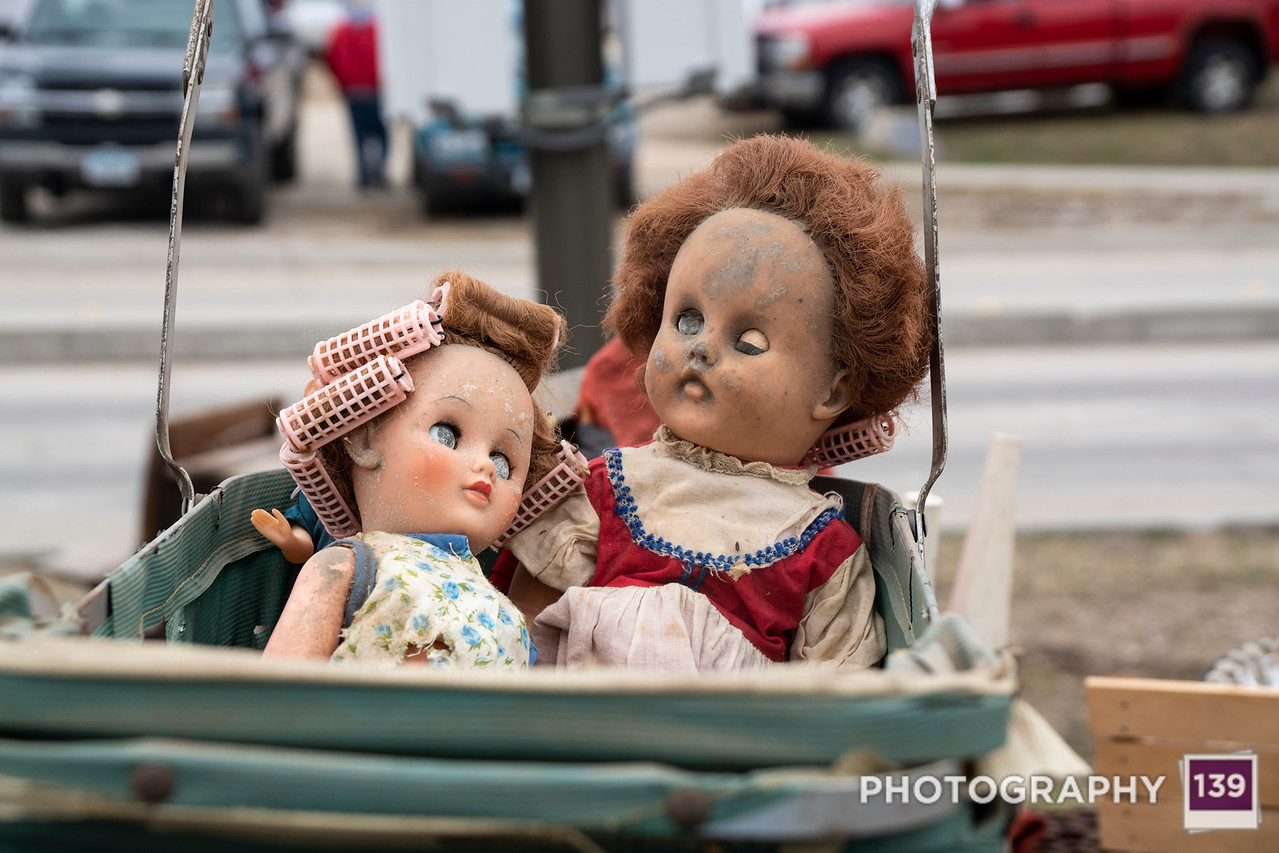 I never would’ve stumbled upon this auction IF:

+There weren’t pelicans at the J. Carlson Wildlife Area on Wednesday.
+If the pelicans would’ve been there on Thursday.
+If Naima hadn’t decided to do something stupid on Saturday morning.
+If the Whistle Stop Cafe wasn’t super packed.
+If Carla didn’t move out between Boone and Ogden.
+If the Don Williams Clubhouse hadn’t just re-opened for the season.

It was not the Saturday morning I envisioned when I closed my eyes and went off to slumberland on Friday night.

I didn’t buy anything, but Carla purchased a few nuggets. Grandpa Dean had his own plumbing business. Carla purchased a whole package of his business calendars from 1975 and 1976. Never opened. I’ll be giving some of those to Nate and Bethany next time I see them.

*I was almost born at the Hillbilly Auction after all.