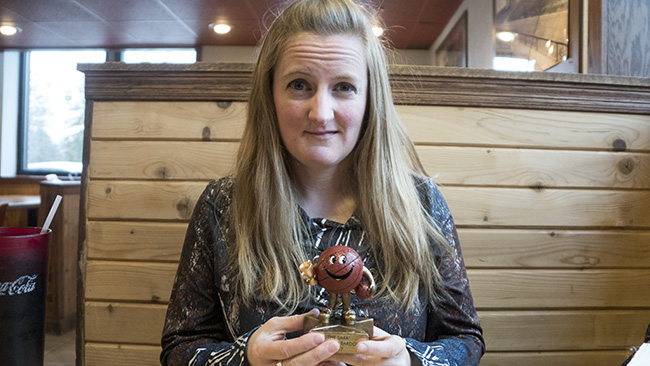 It is done. College basketball is over for another season.

In 11 days Iowa State football will hold their Spring Game. After that, the only sports worth watching until college football kicks off in 5 months is the NBA Playoffs. I’m not sure what I’ll do with my spare time. Maybe I’ll clean my house. Now I’m really depressed.

Paul Golden, that is who! For the second straight year, he is cutting down the nets for the Roundball Oracles. His name had been added to the List of Immortals:

One more trophy and he will tie Willy and Mark for the most crowns ever!

I held onto Paul’s trophy from last year, when in became apparent he might win again, so I don’t have a picture of Paul with his trophy yet. But when I do, I’ll share it here.

I do however have a picture of last year’s The Sara winner: 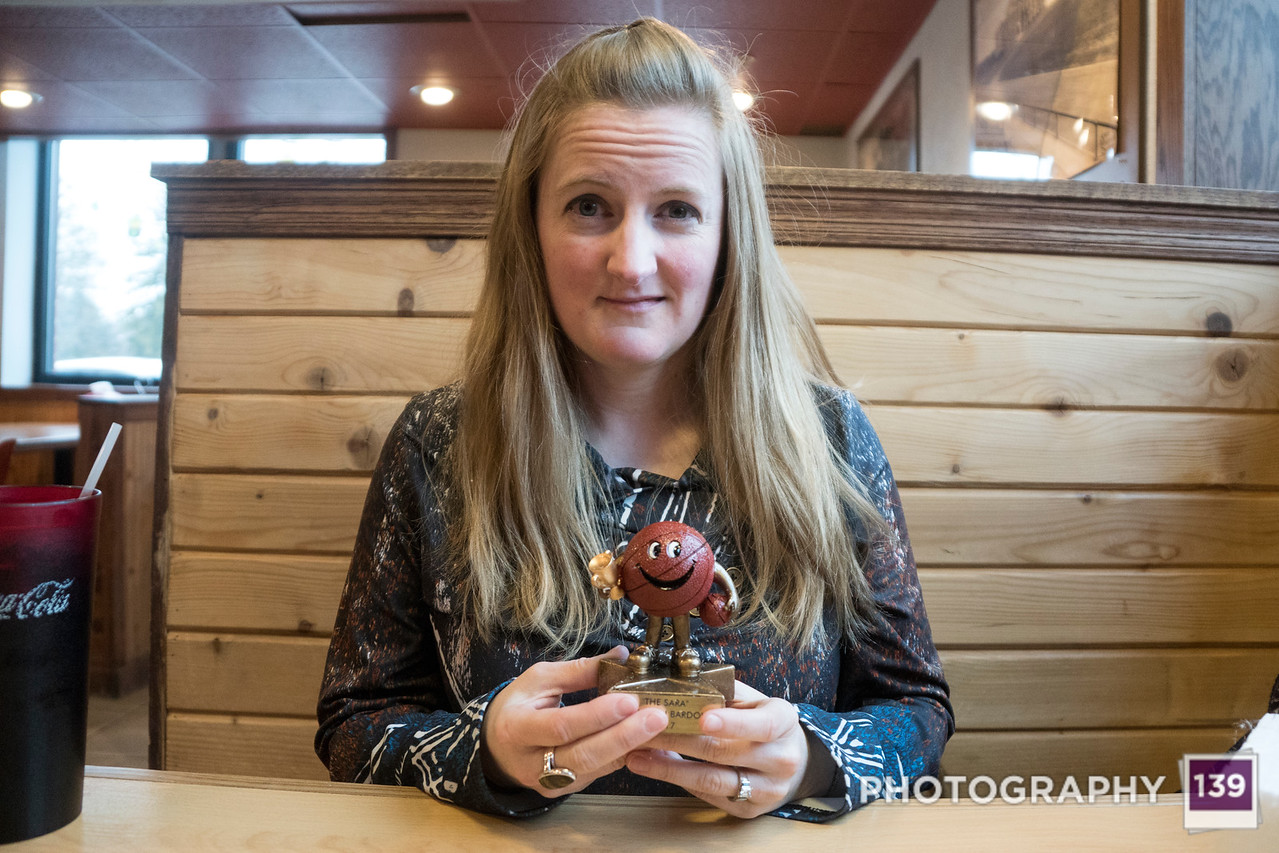 Shannon with The Sara

However, Shannon did not have the guts to come back and defend her The Sara Title. Therefore, there is a new The Sara “Winner” this year.

“Congrats” to Robert Henning for being the last place adult, that tried to win. I have went over his bracket with a fine tooth comb and even though he picked Kansas to win it all, it would seem he was trying to win in good faith. He joins the List of Mortals:

There were 35 entrants this year. A slight dip from past years, but that was to be expected with the lack of any local teams in the tournament. Most of us adopted Loyola as our team, since they were powered by former Cyclone Clayton Custer.

However, it was a clean, close competition. Michigan’s defeat of Loyola in the Final Four left it down to just Rachel and Paul battling it out for the trophy. Villanova’s complete shellacking of Kansas gave Paul the repeat.

But you didn’t come here to listen to any of that tommyrot. You want to see the final standings:

The good news is that next year is that the state of Iowa won’t be shutout of the NCAA Tournament. If nothing else, the first two “real” rounds will be held in Des Moines. Plus Iowa has a lot of young talent that will be back next year. Admittedly, they still have the same sub-par coach, but they should be good enough to go dancing for a short while.

Iowa State on the other hand will be one of the most interesting teams in the country. This year’s team was very young and was decimated by injuries. The only major loss from last year’s team is Donovan Jackson, which Kansas fans know, is a major loss. However, assuming Lindell Wigginton comes back (and almost everybody assumes he will), they return a future first round pick in Wigginton and fellow freshman stud Cam Lard. Plus you bring Babb and Solomon back from injuries. Bring back a big time contributor down the stretch in Zoran Talley. A much improved Terrence Lewis will fight for playing time with super impact transfer Marial Shayok and impact transfer Michael Jacobson. Then add stud freshman Talen Horton-Tucker to the mix. One guy you don’t want to sleep on is Zion Griffin. Plus they are adding Tyrese Halliburton and George Conditt. I don’t expect those 2 to contribute next year, but they will be huge in the coming years.

This will be the most talented roster since Iowa State had 5 NBA players on the roster a few years back. That team lost in the first round of the tourney. I expect much bigger things from the Cyclones next year. The future is bright in the Cyclone State!