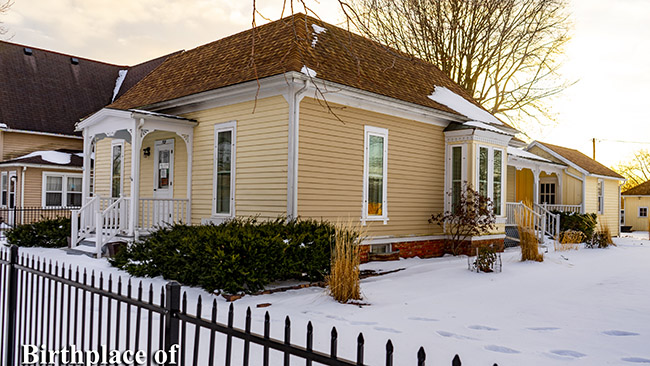 Today we are going to focus on the birthplace of (for now) the most famous person to ever come from Boone. The former First Lady Mamie Doud Eisenhower. Her birthplace is one of only two birthplaces of First Ladies that have been made historic sites. The other is the birthplace of Abigail Adams. I don’t imagine there will be many more in the future, since most people are born in hospitals these days, but you never know.

I do want to mention that the controversy surrounding the birthplace from a few years ago is over. The people that wanted to sell the Birthplace and/or turn it into a bed & breakfast have all been fired or purged from the Boone Historical Society. It will open again, when the pandemic has subsided. That is all I wish to say about that sad chapter of this historic site’s history at this time.

Here is a little bit about Mamie Doud Eisenhower from the Boone County Historical Society’s website:

Mamie Geneva Doud, named, in part, after the popular song, Lovely Lake Geneva, was born November 14, 1896 at 718 Carroll Street in Boone, Iowa, the second of four daughters born to Elivera Mathilde Carlson and John Sheldon Doud. She grew up to become the wife of the 34th President of the United States, Dwight David Eisenhower.

When Mamie was nine months old, the Douds moved to Cedar Rapids, where John Doud became a buyer for the T. M. Sinclair Co. By 1905, after making a fortune in the meat-packing industry, John Doud—at age 36—partially retired and moved his family to Colorado, settling first in Pueblo, then in Colorado Springs, and finally in Denver. The Douds spent winter vacations at their second home in San Antonio, Texas.

In October 1915, soon after completing her education at the Wolcott School for Girls, a finishing school in Denver, Colorado, 18-year-old Mamie met 24-year-old Dwight David Eisenhower in San Antonio at the home of friends. Dwight, called “Ike”, was a newly-commissioned Second Lieutenant in the United States Army stationed at nearby Fort Sam Houston. Mutually enamored, the two young people dated and quickly became engaged—on Valentine’s Day—and were married on July 1, 1916 at the Doud home in Denver, when Mamie was 19 and Ike was 25.

The Eisenhowers entertained an unprecedented number of heads of state and leaders of foreign governments. As First Lady, Mamie was noted for her outgoing manner, her love of pretty clothes, jewelry, and her obvious pride in husband and home. She was named one of the twelve best-dressed women in the country by the New York Dress Institute every year that she was First Lady. The “Mamie Look” involved a full-skirted dress, charm bracelets, pearls, little hats, and bobbed, banged hair that was a modified version of the Dior’s postwar “New Look”. Her style included both high- and low-end items and she symbolized the ideal 1950s wife and mother.

Mamie never lost contact with her mother’s Boone family, the Carlsons. Throughout the 1940s, 1950s, and 1960s, the Eisenhowers regularly visited Boone, especially during Ike’s presidency and after his retirement. Mamie was also quite active with her favorite charities, served on the boards of three colleges, and performed other civic duties.

After Ike’s death in 1969, Mamie continued to visit Boone, making her last trip in 1977, two years before her death. She suffered a stroke on September 25, 1979 and was rushed to Walter Reed Army Medical Center, where her husband had died a decade before. She remained in the hospital, and on October 31st, announced to her granddaughter, Mary Jean, that she would die the next day. She died in her sleep very early the morning of November 1,1979, at the age of 82. Mamie was buried beside her husband on the grounds of the Dwight David Eisenhower Presidential Library and Museum in Abilene, Kansas.

Now that you know a little more about Mamie, here is some information about the Birthplace itself, also from the Boone County Historical Society website:

Built in the 1880s, Mamie’s birthplace received national attention on November 2, 1954 when the DeShon Chapter of the Daughters of the American Revolution, Boone, Iowa, placed a bronze marker on a stone in front of her home. After Mamie received the coveted Iowa Award in Boone in 1970 from Governor Robert D. Ray, local interest in preserving her birthplace grew, and a group of concerned Boone citizens formed the Boone Committee for Preservation of Historic Landmarks, Inc. (Trust Committee) to look into saving the house, and started raising funds for that purpose. This home was the only remaining Iowa birthplace of the wife of a U.S. President; Herbert Hoover’s wife’s birthplace in Waterloo, Iowa was torn down in 1926.

The birthplace had been purchased in 1962 by the adjacent First Baptist Church, for possible future expansion; renovations were then made so it could be a rental property. In 1974 the Church’s plans for an expansion were finalized, and the Church offered the house to the Trust Committee as a gift for preservation, provided it was moved from its original location. A formal acceptance ceremony involving several Boone civic leaders was held on March 17, 1975 in the parlor of the First Presbyterian Church in Boone. During the ceremony, the officers of the Trust Committee accepted the house as a gift from the First Baptist Church. The property across the street, where the home was to be moved, was gifted by Warren Kruck. The additions and renovations made previously to the house were removed and on September 15, 1975, Mamie’s Birthplace was moved across the street to the west, to 709 Carroll Street.

Restoration plans were drawn up by Iowa architect William J. Wagner of Des Moines, who was noted for his work in the preservation of historic Iowa homes and buildings. Five years of extensive restoration were done, including the restoration of a summer kitchen and carriage house. With Mamie’s aid, the Trust Committee arranged with the History Colorado Museum in Denver, Colorado for the loan of the original bedroom furniture from the home, used when Mamie was born. In addition, Mamie and her sister, Mrs. G. Gordon Moore of Washington, D.C., plus their uncle, Joel Carlson of Boone, donated many family heirlooms for the home, including a chair, Bible, piano, and settee owned by Mamie’s parents.

Miss Lois E. Dell of Des Moines chaired the committee that collected books for the library. Rugs, curtains, and wallpaper reflecting the 1890s period were found and purchased for the interior. Many organizations raised funds for, and contributed to, the restoration of the birthplace. The Iowa American Legion contributed $500 to the restoration and passed a resolution (see below) urging all Iowans to assist financially to the project. The Boone County American Legion and Auxiliary contributed a flag pole and flag. The Boone Women’s Club raised money for the landscaping. The two Boone Questors Clubs contributed substantially, and the Boone Soroptomist Club held a tour of homes project in the spring of 1977 to raise money.

Displays about the Eisenhowers can be found in the museum and reference library in the basement, including books, documents, photographs, and artifacts pertaining to the Doud and Eisenhower families, plus local history and information about the restoration project. The carriage house, erected in 1982, contains the Chrysler Windsor Sedan given to the Carlsons by the Eisenhowers in 1948, and Mamie’s 1962 Plymouth Valiant.

Mamie’s Birthplace was dedicated and opened for tours on June 22, 1980, with members of the Eisenhower family and Bob Hope attending. The home is one of only two First Ladies’ birthplaces in the United States to have been restored; the other is the birthplace of Abigail Adams in Massachusetts.

Before we get to the postcards, I want to share some of the pictures my Dad took of the dedication of the Mamie Doud Eisenhower birthplace. Unfortunately I scanned these almost 10 years ago and not with a very good resolution, but despite their size, they are fascinating:

Now that you know about the place, here are the postcards I recreated for the Mamie Eisenhower Birthplace: 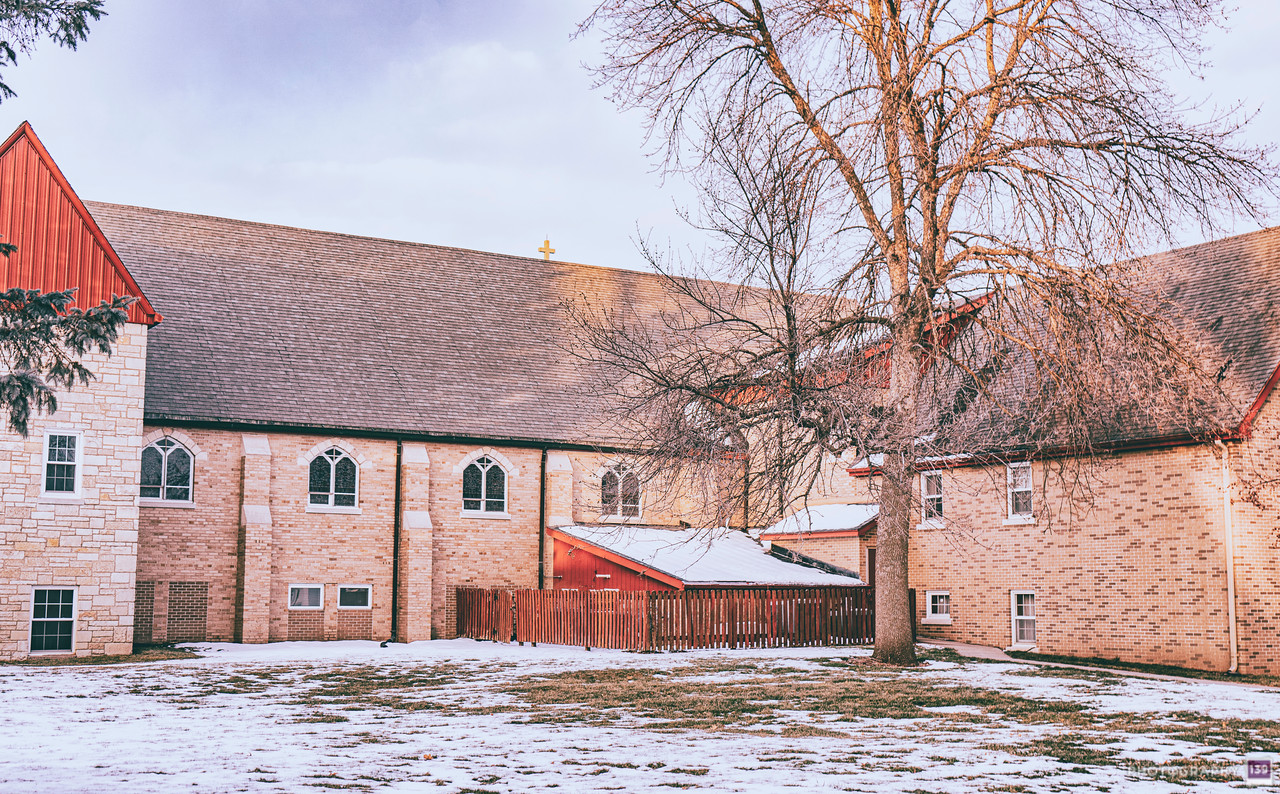 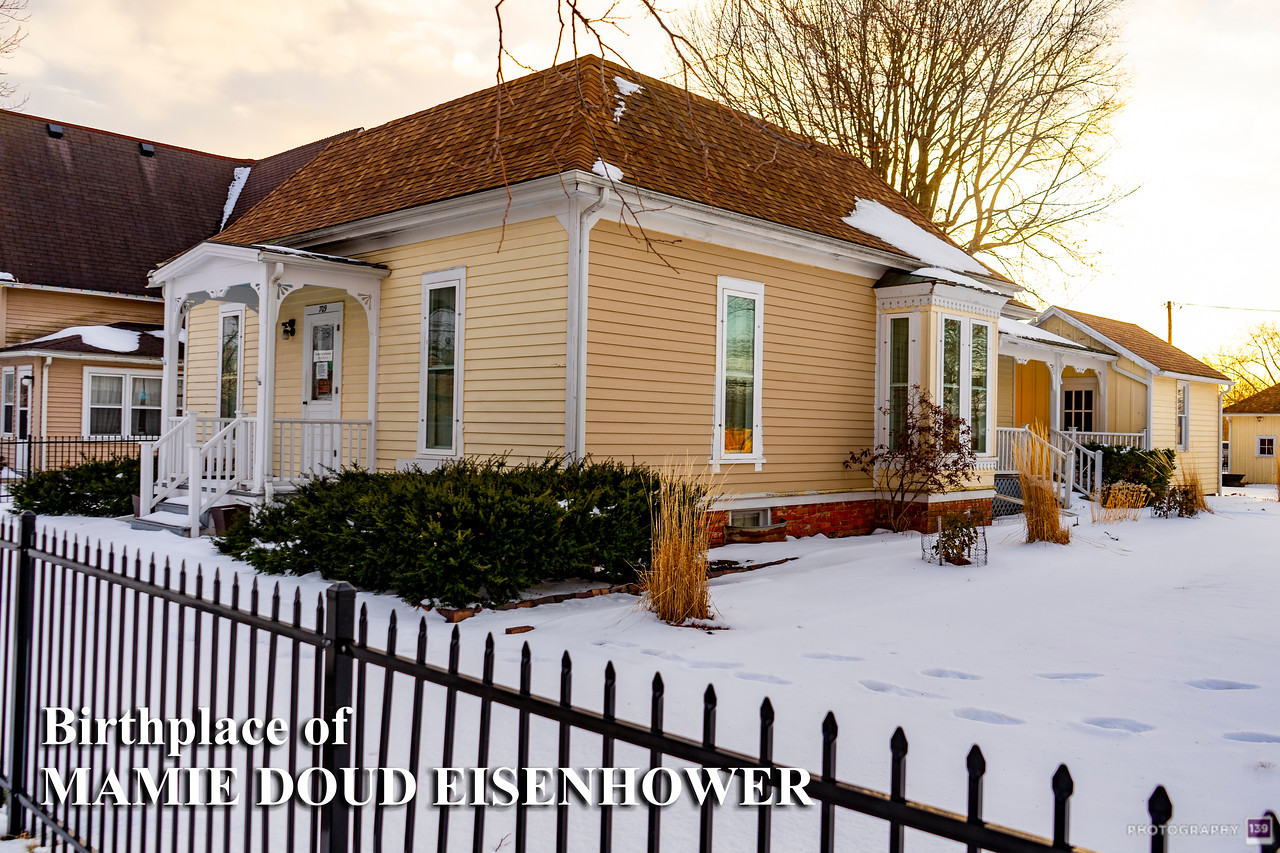 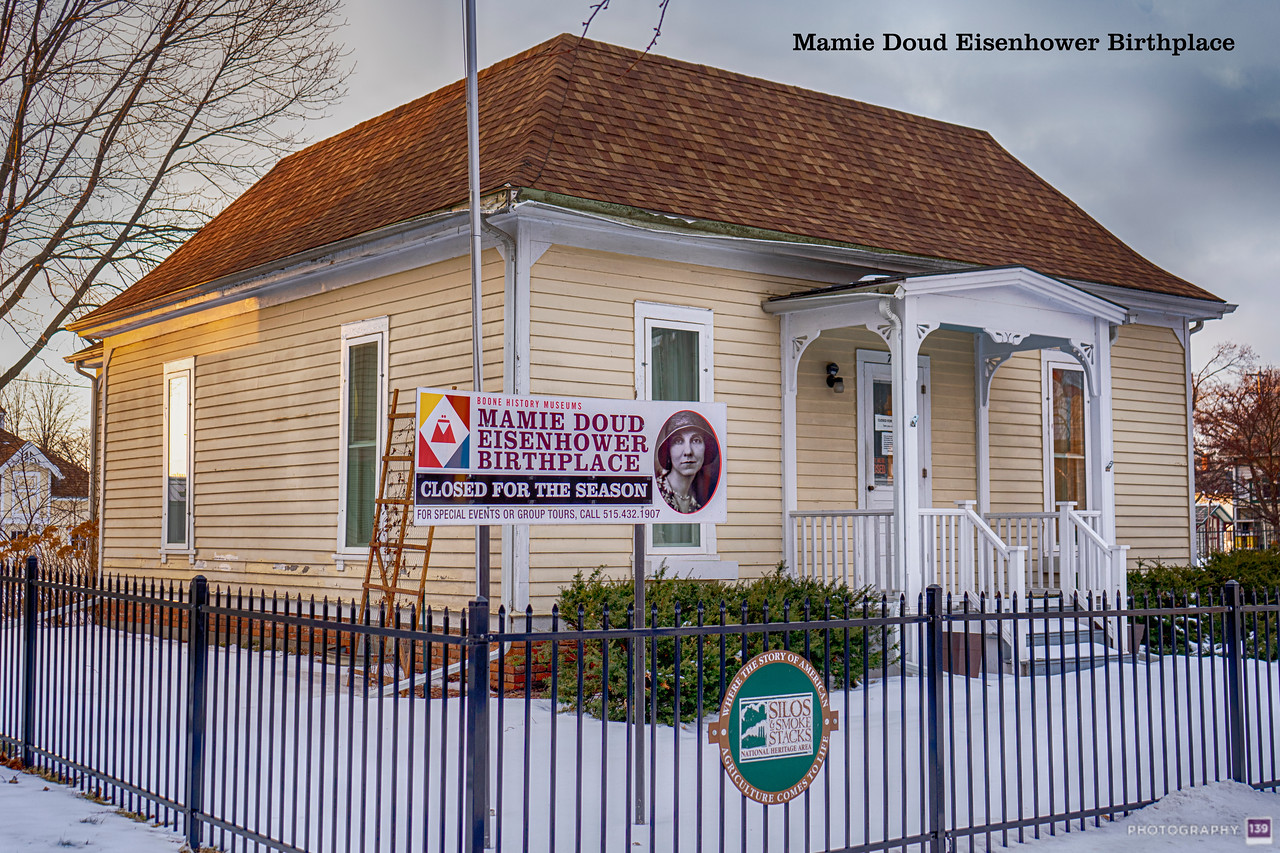 One last story, looking at the pictures of the dedication of The Mamie Doud Eisenhower Birthplace I am reminded of a story Teresa recently told me about our Dad. Apparently way back in the day, they used to bring a small submarine to Don Williams Park and give submarine trips around the lake.

Dad really wanted to Teresa to go on this submarine trip, but she refused and he became angry at her. She went on to talk about how he always wanted her to shake hands with people that were at the dedication to the Mamie Doud Eisenhower Birthplace. Like Governor Ray and Bob Hope. When she didn’t want to do it, this also made him mad.

This is how I know I’m like my Dad in some ways. Just her telling me the story that she had a chance to take a submarine ride around Don Williams Lake and it turned it down started to make me angry. And how could you pass up a chance to shake hands with Bob Hope! But I digress.

The next set of postcards that will get mailed to your inbox will involve a look at Boone from up high!