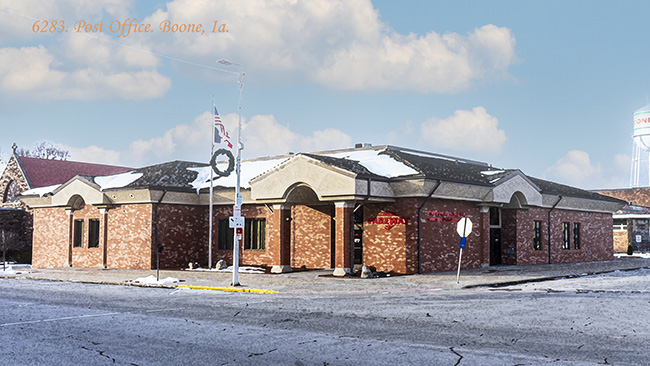 Today I’m going to share a set of postcards of the Boone Post Office I recreated. A government building that wasn’t attacked by domestic terrorists who have brainwashed by a misinformation ecosystem that can’t handle that their messiah, got his ass handed to him in an election. Despite the fact that there has been zero evidence of voter fraud and the Trump regime has lost 60 lawsuits because they have, zero evidence. It was truly one of the darkest days in American history. A day that will live in infamy.

Mike Pence is a homophobic piece of trash, but his words yesterday did set the right tone:

Today was a dark day in the history of the United States Capitol. But thanks to the swift efforts of U.S. Capitol Police, federal, state and local law enforcement, the violence was quelled. The Capitol is secured, and the people’s work continues.

We condemn the violence that took place here in the strongest possible terms. We grieve the loss of life in these hallowed halls, as well as the injuries suffered by those who defended our Capitol today. And we will always be grateful to the men and women who stayed at their posts to defend this historic place.

To those who wreaked havoc in our Capitol today, you did not win. Violence never wins. Freedom wins. And this is still the people’s house. And as we reconvene in this chamber, the world will again witness the resilience and strength of our democracy, for even in the wake of unprecedented violence and vandalism at this Capitol, the elected representatives of the people of the United States have assembled again on the very same day to support and defend the Constitution of the United States.

So may God bless the lost, the injured and the heroes forged on this day. May God bless all who serve here and those who protect this place. And may god bless the United States of America.

It is very, very difficult to put into words what has transpired today. I have never lived through or even imagined an experience like the one we have just witnessed in this Capitol. President Franklin Roosevelt set aside Dec. 7, 1941, as a day that will live in infamy. Unfortunately, we can now add Jan. 6, 2021, to that very short list of dates in American history that will live forever in infamy.

This temple to democracy was desecrated, its windows smashed, our offices vandalized. The world saw Americans’ elected officials hurriedly ushered out because they were in harm’s way. The House and Senate floors were places of shelter until the evacuation was ordered, leaving rioters to stalk these hallowed halls. Lawmakers and our staffs, Average citizens who love their country, serve it every day, feared for their lives. I understand that one woman was shot and tragically lost her life. We mourn her and feel for her friends and family.

These images were projected for the world. Foreign embassies cabled their home capitals to report the harrowing scenes at the very heart of our democracy. This will be a stain on our country not so easily washed away – the final, terrible, indelible legacy of the 45th president of the United States, undoubtedly our worst.

I want to be very clear: Those who performed these reprehensible acts cannot be called protesters – no, these were rioters and insurrectionists, goons and thugs, domestic terrorists. They do not represent America. They were a few thousand violent extremists who tried to take over the Capitol building and attack our democracy. They must and should be prosecuted to the full extent of the law – hopefully by this administration, if not certainly by the next. They should be provided no leniency.

I want to thank the many of the Capitol Hill police and Secret Service and local police who kept us safe today and worked to clear the Capitol and return it to its rightful owners and its rightful purpose.

I want to thank the leaders, Democrat and Republican, House and Senate. It was Speaker Pelosi, Leader McConnell, Leader McCarthy and myself who came together and decided that these thugs would not succeed, that we would finish the work that our Constitution requires us to complete in the very legislative chambers of the House and Senate that were desecrated but we know always belong to the people and do again tonight.

But make no mistake, make no mistake, my friends, today’s events did not happen spontaneously. The president, who promoted conspiracy theories and motivated these thugs, the president who exhorted them to come to our nation’s capital, egged them on – he hardly ever discourages violence and more often encourages it – this president bears a great deal of the blame. This mob was in good part President Trump’s doing, incited by his words, his lies. This violence, in good part his responsibility, his ever-lasting shame. Today’s events certainly — certainly — would not have happened without him. Now, Jan. 6 will go down as one of the darkest days in recent American history.

A final warning to our nation about the consequences of a demagogic president, the president who enable him, the captive media that parrots his lies and the people who follow him as he attempts to push America to the brink of ruin. As we reconvene tonight, let us remember, in the end all this mob has really accomplished is to delay our work by a few hours. We will resume our responsibilities now, and we will finish our task tonight. The House and Senate chambers will be restored good as new and ready for legislating in short order. The counting of the electoral votes is our sacred duty.

Democracy’s roots in this nation are deep, they are strong. They will not be undone ever by a group of thugs. Democracy will triumph, as it has for centuries. So, to my fellow Americans who are shocked and appalled by the images on their televisions today and who are worried about the future of this country, let me speak to you directly: The divisions in our country clearly run deep, but we are a resilient, forward-looking and optimistic people, and we will begin the hard work of repairing this nation tonight because here in America we do hard things. In America, we always overcome our challenges.

But Barack Obama probably put it best, like he usually does:

History will rightly remember today’s violence at the Capitol, incited by a sitting president who has continued to baselessly lie about the outcome of a lawful election, as a moment of great dishonor and shame for our nation. But we’d be kidding ourselves if we treated it as a total surprise.

For two months now, a political party and its accompanying media ecosystem has too often been unwilling to tell their followers the truth – that this was not a particularly close election and that President-Elect Biden will be inaugurated on January 20. Their fantasy narrative has spiraled further and further from reality, and it builds upon years of sown resentments. Now we’re seeing the consequences, whipped up into a violent crescendo.

Right now, Republican leaders have a choice made clear in the desecrated chambers of democracy. They can continue down this road and keep stoking the raging fires. Or they can choose reality and take the first steps toward extinguishing the flames. They can choose America.

I’ve been heartened to see many members of the President’s party speak up forcefully today. Their voices add to the examples of Republican state and local election officials in states like Georgia who’ve refused to be intimidated and have discharged their duties honorably. We need more leaders like these – right now and in the days, weeks, and months ahead as President-Elect Biden works to restore a common purpose to our politics. It’s up to all of us as Americans, regardless of party, to support him in that goal.

4 people died yesterday. While they were seditionists, it is still sad to see that happen. Just a profoundly sad day in America. But once again, the terrorists did not win.

But enough of the sadness, how about some old-timey postcard recreation!

For this project, I recreated 3 postcards of the old postcard in Boone. Unfortunately, it no longer stands. It was replaced by a more modern post office, so these mostly end up being pictures of a Fareway training center. 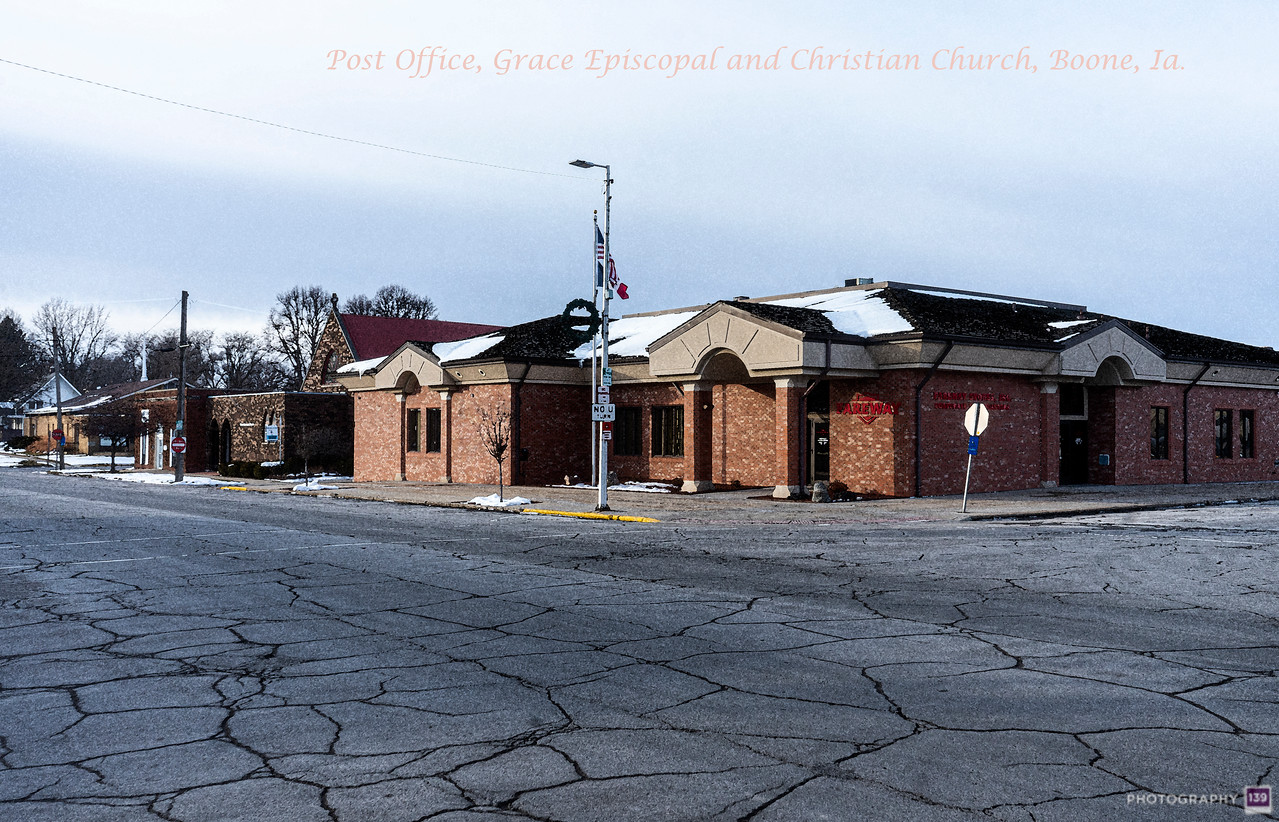 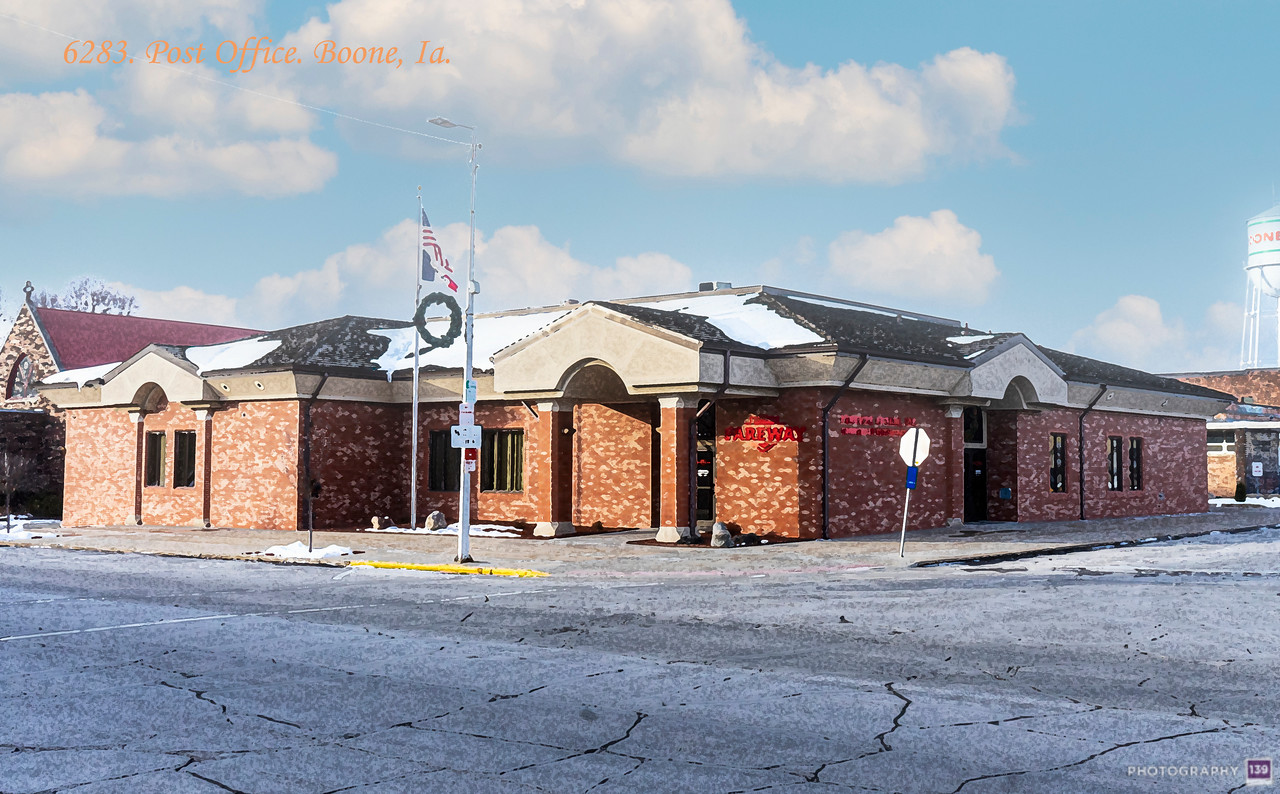 The next time I recreate an old-timey postcard, it will involve the Boone County Courthouse.