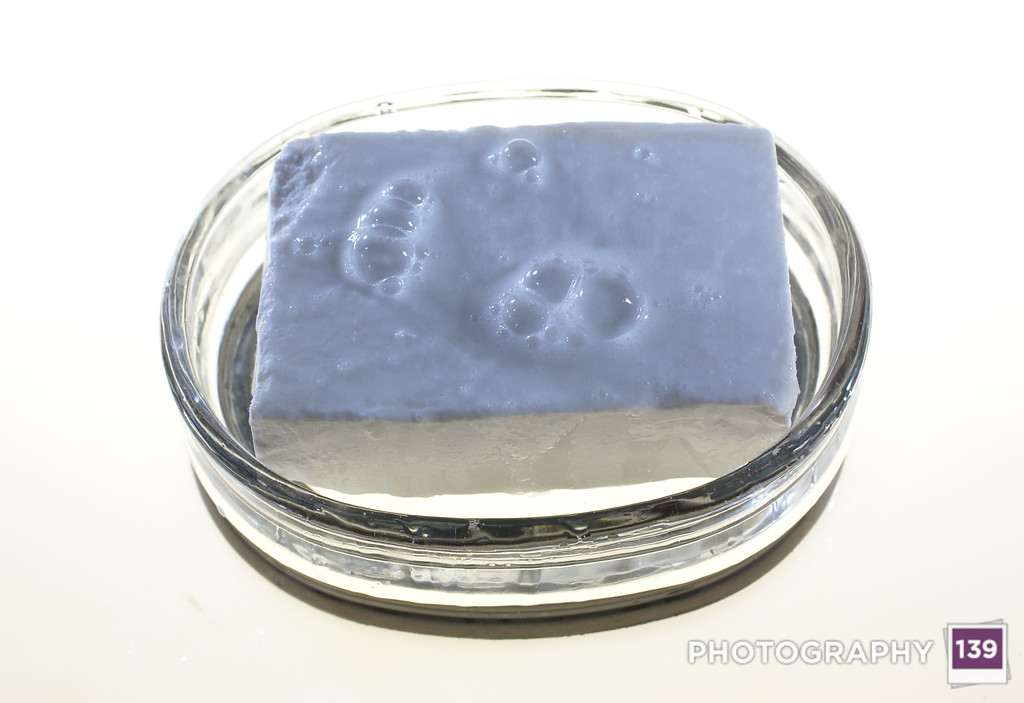 You now know that this soap is a dream come true. It is a powerhouse and it is gentle. Perhaps you want some evidence of its power.

6. Little White Lye Soap salvages clothing. Not only does LWL get your body immaculately clean, but its powerful gentleness (or gentle powerfulness depending on which way you swing) can remove stains from clothing that you thought were destined to be thrown out, be turned into a dustcloth (ahem oil rag), or depending on how you feel about the poor a Salvation Donation. It only takes a small amount to remove even your toughest stain.

I can be a messy eater. For the most part I can keep most of what I put into my mouth in my mouth until it makes its long descent into my digestive system. What usually escapes can end up in the goatee, but sometimes some sauce or dressing will make the gravity induced fall onto a valued shirt and ruin it forever.

Just such a thing happened to my favorite Modern Day Hero shirt. I thought it was damaged for eternity and I would never be able to rock as hard again.

I’m not a quitter though. I tried numerous of The Man’s name brand laundry detergents, but it was for not. My Modern Day Hero shirt seemed destined to be moved to the undershirt category, next to my Ames Jaycee shirt and my Dang! Root Beer Shirt.

Then I remembered that just a a fingertips worth of LWL had saved my Rocky shirt from a similar fate a few months earlier. So I rubbed a little bit of LWL soap on the foul stain and put the shirt back in the laundry.

When I took the shirt out of the laundry the shirt was back to condition it was when it rolled off the Lone Wolf Gear assembly line.

Ready to Rock, Once Again

I’m eternally grateful to LWL for saving this shirt because Modern Day Hero isn’t even together any longer and I don’t think I would ever be able to replace this one of an item shirt.

7. A bar of Little White Lye Soap is mammoth. I’m just a poor wordsmith with a limited vocabulary, so I’m not sure that mammoth does the size of a bar of Little White Lye Soap justice. I tried out a few other words in my brain: behemoth, colossal, elephantine, gargantuan, jumbo, massy, mastodonic, prodigious, titanic, and monstrous. I’m not sure if any of those words even encompass the sheer magnitude of this bar of soap. It is roughly 6 ounces!

You read that right, 6 ounces. I wish I had photographic evidence to show you the difference between a bar of LWL and a bar of Irish Spring. I don’t though because The Man’s soap never makes it into my bathroom.

What I can offer is a chart that illustrates the difference between a bar of LWL and The Man’s line of soaps.

The best that The Man can manage is 4.5 oz? If I didn’t know any better, I’d think that The Man wasn’t even trying. The truth is that The Man just doesn’t have any respect for you. He thinks 4.5 ounces of his sub par soap is all that you proletariat swine can handle or deserve.

Don’t get mad at me, I’m just telling you the message that The Man is sending with his 4.5 ounce bar of soap.

Just think of the benefits of getting that much soap in one bar. Say you have a neighbor that falls for The Man’s lies. While you are still on your second bar of LWL soap, they will already be starting their 4th bar of Dial. Is there any competition or is is this complete and utter soap domination? If you are thinking about it, that was a rhetorical question used to illustrate the gap between a phenomenal product and what you have been taught to consider acceptable.

I’m just going to throw this out there, but despite the obvious economic advantages to switching to LWL soap for its girth, there is another practical advantage to switching to a soap with a larger footprint.

Are you familiar with the form of discipline known as soap whipping?

It was all the rage in the military back in the day. A guy in your platoon can’t keep up on marches, can’t finish the obstacle course, steals donuts from the mess hall and has varying other major malfunctions. A good way to get him to walk the straight and narrow is to hold him down with a blanket while everybody in the platoon soap whips him. You put a bar of soap in a towel or your sock and then use it to give out some of the old negative reinforcement.

Now most of us aren’t in the military and science tells us that negative reinforcement doesn’t work all that well compared to positive reinforcement, but there are times when you need to regulate on one of your chums. Perhaps they think it is an acceptable form of entertainment to sit at Old Country Buffet making fun of the fat people going up for their 4th or 5th trip. Perhaps they think it is okay to cancel on Cat on a Hot Tin Roof 37 minutes before the curtain rises. I mean there is always a good reason to soap whip one of your closest buddies.

Imagine what would happen if you struck somebody with a bar of Zest. If you were to do such a foolish thing to even your little sister she would mock you by saying something like this:

“If I wanted a kiss I would have called your mother.”

Sure that would be a little bit strange because she is your sister, but imagine the same situation with 6 oz of fury inflicting the damage. Now that is the type of negative reinforcement you can take to the bank and nobody will be cracking wise about your mama.

Now you should be sold on the economic advantages of LWL, the fact that this soap is for everybody, its gentle powerfulness even keeps your wardrobe looking good and the fact that the soap is Bunyanesque.

Now you are ready to get more information. Just click the link below and visit the website:

Or perhaps you are ready to get your first batch ordered right now, then I have a second link for you:

There is a chance that you still aren’t sold. That is okay. I still have 3 excellent reasons why you should rely on Little White Lye for all of your soap needs.