On Wednesday morning I woke up and most of my anger about the Fred Hoiberg hire had dissipated. I had come to accept the fact that while this was mostly a public relations move, there is a chance that it could work. I’m not saying that this is an uncontested breakaway slam dunk. This is more like a turnaround fadeaway with a 7 footer in your face from the baseline.

While it is scary that he will be learning on the job, there is a potential huge upside. He should be able to recruit and he should be able to evaluate talent. 95% of basketball games are won by the team with the more talented players.

I also assume that since Hoiberg has years of NBA experience he will be able to relate to the younger, more talented players and the great exodus of talent from Ames will finally come to an end. Any Biblical scholar can tell you that after the exodus ends it is only a matter of time before the years of wandering in the desert comes to an end.

Even though we will only return 5 scholarship players from last year, I still feel that we will have a better record next year. I’m not sure why I have this optimism, but I have come to peace with the Hoiberg hiring. On Wednesday morning I accepted that it might just work. After all, Hoiberg is a graduate of the nation’s premier land grant university. That fact alone qualifies him for about any job that I can name!

After coming to that conclusion, I got out of bed and took a shower. After Nate woke up we went to Puffy Cream for breakfast. It was excellent, again.

I wasn’t sure how long I was going to stick around, so I contacted Jill about getting supper. She wasn’t sure when she would get off work because her company was enforcing mandatory overtime, even though it wasn’t even Georgia-Texas week.

I don’t watch lots of television. I’m always leery of saying that because I don’t want to come off as one of those snobby people who don’t own a television and feel that this gives them a degree of superiority to other people. I can’t stand those people. I’m better than those people.

That being written, I really don’t watch much television. Of the shows that are currently being broadcast on network television, I’ve probably seen a single episode of maybe 10 shows. But on this day, I spent a good portion of the day sitting on the couch watching tv with Nate.

At 6:30 I met Jill at The 5-8 Club in Minneapolis. When I was in Minnesota in February I ate at Matt’s Bar with Jim and Bethany. Matt’s Bar and The 5-8 Club both claim to have invented the Juicy Lucy. I was happy that I was going to be able to have both sandwiches so I could determine which one I consider to be the superior burger. 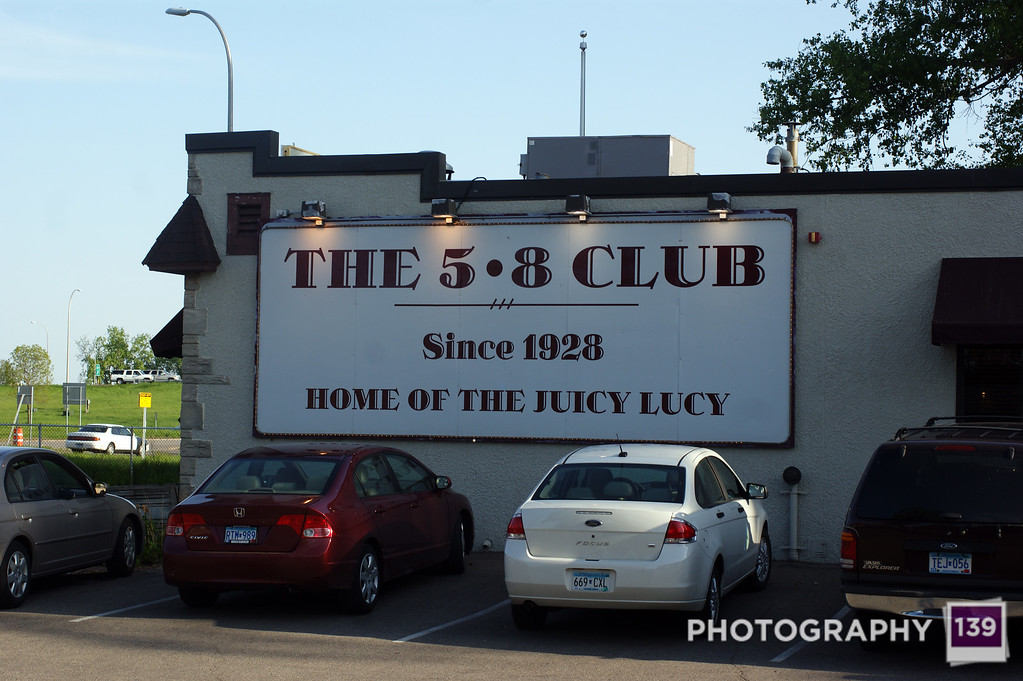 The place was packed, but there wasn’t a line and a couple of people left as we entered the building, so we were able to get a seat immediately.

I was pretty hungry since all I had eaten on the day was a couple of donuts and some leftover walleye from Houlihan’s. Well, I guess that wasn’t exactly true. Becca fed me some food that she had bought at Trader Joe’s. A place that Becca is very passionate about. Regardless, I was still hungry.

I orderd The Juicy Luicy:

By far our most popular menu item, the Juicy Lucy is a mouth-watering half pound burger stuffed with American cheese. The cheese is HOT – be careful and take your time. Bleu, pepper or Swiss cheese is also available. The wait’s a little bit longer; but we promise it’ll be worth it!

Lucy’s little sister. Born on May 8, 2005. She making her public debut! A half pound burger stuffed with our secret sauce, and topped with American cheese, shredded lettuce, raw onions, and a smear of Thousand Island Dressing. Make sure you have plenty of napkins.

While Jill was explaining to me her theory on why she is an evolved being, the people sitting in the booth next to ours stopped her. They apologized for eavesdropping on our conversation and then made commentary on why they agreed with Jill’s theory on highly evolved human being.

After we had ate as much food as we could, we waited patiently for our bill. This was the type of joint where you pay the waitress, but our waitress had disappeared. In fact, I didn’t see any waitress. We probably waited for a good 20 minutes before the waitress showed up and said:

Then a few minutes later she showed up with the bill.

I gave her my Bank of the Bear card. She took it and when she came back to give me the bill she handed me somebody else’s credit card. After hopefully getting the finances of the evening squared away I’m ready to make this proclamation:

Matt’s Bar serves the superior Ju(i)cy Lucy. The 5-8 Club wasn’t bad and I would certainly go back, but Matt’s is superior. At some point I might have to go back to try the Saucy Sally.

After the meal I bid Jill a fond adieu and hit the open road back to the Cyclone State. It was a pretty great 3 days in Minnesota.