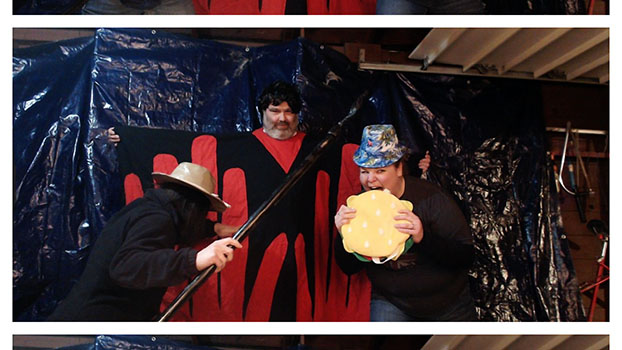 I’ve thanked all these people in person, but I’d like to publicly thank everybody that helped out in some either small or big way with my birthday party on Saturday.

Big shout out to Scott for making tons of delicious mouth watering chicken and jalapeno cream corn. I only wish I would have had time to help do more than just brine the chicken. If I am so inclined to do this again next year and you are so inclined to help with the food next year, I will have to schedule this so I can be more hands on with the process. I may have been The Master, but Scott was undeniably the Smoker Master. I just can’t overstate how amazing the chicken was people.

Much love to Scott’s (better-other-less high maintenance) half for making the Pick and Pluck. If I would’ve thought of it, I would’ve bought several gallons of ice cold chocolate milk to knock down while setting up shop on that thing.

Thanks to Logan and Corinna for holding down the grill and making an assortment of hot dogs and sausages to compliment the mouth watering chicken. I don’t really have any photos of the event, perhaps next year I can talk him/them into doing some candid photography for the party.

I’m always able to count on Dae Hee when I need some assistance. He came over and helped put up the canopies for the outdoor dining area, the tent for an additional child area, moved all the chairs from the basement to the outdoors, and watched 2 hours of GAME OF THRONES. A pretty solid effort!

Thanks to Jason for loaning me his Cornhole set.

Thanks to Shannon for loaning me her canopies, although I’m still unclear where one gets tailgating tents that don’t have Iowa State colors. Or why a person would even want such a thing.

Thanks to Jesse for laminating the beverage identification signs.

Thanks to Teresa for helping out in various tasks before the party started.

Thanks to my Mom for making a copious amount of side dishes and desserts. Nobody went home hungry. That is for sure.

Finally, thanks to everybody that took time out of their lives to come visit me:

A special thanks to Dae Hee, Bethany, and Nora who came from Minnesota. Aunt Linda who came from Kansas. Stephanie who came all the way from Brooklyn. I guess I’m morally obligated to visit her in October now. Right?

Since I think that this party was a success on some level, I am tentatively planning on doing it again next year. Tentatively thinking about some time on Memorial Day Weekend next year. We’ll see how the cookie crumbles.

Now to the less than stellar news…

The Photo Booth was a success, but far from perfect. It turns out that the photo booth program I used has a painful little quirk. If the “Finish” button wasn’t pushed at the conclusion of the photo session, the program timed out and didn’t save the photo strip! The good news is that it did save the original images. The bad news is that there will be a night in my future where I’ll be piecing together photo strips from saved images. Yeah me!

For that reason, I did load up all the images into the party gallery. Not just the “finished” photo strips.

To see those images, click on the link below… (You can also download them by clicking on the down arrow icon.)

However, thought I would share a few of them here as well:

But the good news is that I now have a thousand different ways to improve the photo booth for next year. Tentatively.

One thought on “The Birthday Party of Fate (Roundup)”