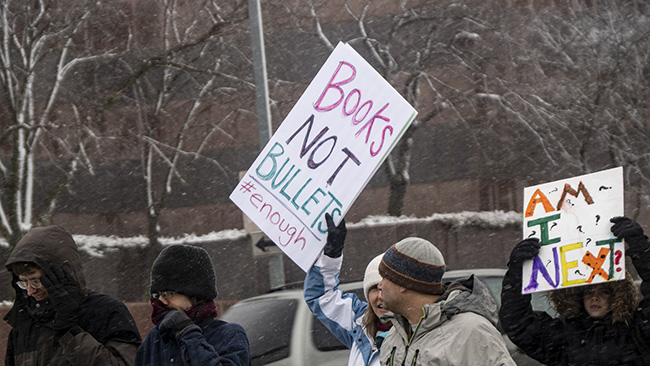 A brief history of school shootings in the United States. Maybe you’ll detect a trend:

Enoch Brown school massacre: Perhaps the earliest shooting to happen on school or college property, in what would become the United States, was the notorious Enoch Brown school massacre during the Pontiac’s War. Four Delaware (Lenape) American Indians entered the schoolhouse near present-day Greencastle, Pennsylvania, and shot and killed schoolmaster Enoch Brown and nine children (reports vary). Only two children survived. However, this incident may only incidentally be considered a school “shooting” because only the teacher was shot, while the other nine victims were killed with melee weapons.

John Anthony Gardner Davis, a law professor at the University of Virginia, was shot by student Joseph Semmes, and died from his wound three days later

Student Mathews Flounoy Ward took a pistol to school, where he shot the schoolmaster William H.G. Butler as revenge for what Ward thought was excessive punishment of his brother the day before. Butler died, and Ward was acquitted.

The schoolmaster had a tame sparrow and had warned the students not to harm it, threatening death. One of the boys stepped on the bird and killed it; he was afraid to return to school but did so. After lessons, the master took the boy into a private room and strangled him to death. The boy’s father went to the school and shot the schoolmaster dead.

University of Texas massacre: 25-year-old engineering student, Charles Whitman, got onto the observation deck at the University of Texas-Austin, from where he killed seventeen people and wounded thirty-one during a 96-minute shooting rampage. He had earlier murdered his wife and mother at their homes

Columbine High School massacre: 18-year-old Eric Harris and 17-year-old Dylan Klebold, students at Columbine High School, killed twelve students and one teacher. They injured 21 additional people, and three more were injured while attempting to escape the school. The pair committed suicide at the end of the massacre.

Here are more pictures from the Des Moines March for Our Lives Rally:

There still are a few more pictures from the March for Our Lives rally left. But not many.

6 thoughts on “Books Not Bullets”