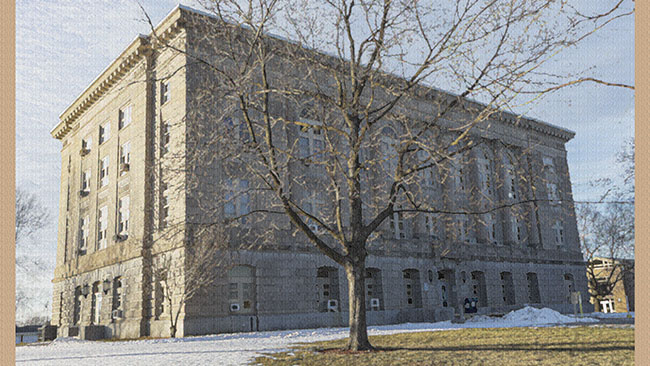 The subject for this week’s POSTCARD RECREATION PROJECT is the Boone County Courthouse.

Boone County was organized in February of 1847. It was named for Nathan Boone, the youngest son of Daniel Boone, who had explored the lands near the Des Moines and Boone Rivers in June of 1835 as an officer of the US Dragoons. For more than two years after its founding, Boone County remained a part of Polk County, but by 1849 area residents wished to vote, pay taxes and do business under their own county jurisdiction. In order for this to occur, Iowa law specified that the county sheriff had to order an election of county officers. Therefore, on May 8, 1849, William McKay, judge of the Fifth Judicial District of which Boone County was a part, appointed Samuel B. McCall county sheriff. McCall then ordered the first election of county officers, which was held on August 6, 1849.

At first, court sessions were held in several Boonesboro (now West Boone) houses, those of John Boyles, John M. Wane and John M. Crooks. Early in 1851 court sessions moved to a log school house, located on Honey Creek about a half mile south of the present day skating pond in McHose Park. A marker denotes the site*.

The county seat was officially established in Boonesboro in July of 1851. On July 26, 1851, recognizing the need for a permanent court room, Boone County Commissioners ordered Wesley C. Hull “to furnish a suitable room in . . . Boonesboro to hold court at the October term. . .” Hull built a double log cabin on lots No. 3 & 4 in block 12, across from the northeast corner of the Public Square. Two years later in 1853, court sessions moved again; this time to a new log school house, which was located where the Garfield School building is today**.

Built between 1856 and 1857, Boone County’s first public courthouse was a two-story frame Old Courthouse building, containing county offices as well as courtroom space. It stood on the corner of Third and Fremont Streets, a block east of the square. Only eight years later, changes were again in the air. In 1865, the new railroad town of Montana (Boone Station, now Boone), a mile and one/half to the east of Boonesboro, was challenging Boonesboro’s economic and political status. Hoping to preserve Boonesboro as the county seat, residents, merchants and officials agitated for the building of a new, larger courthouse on the town square. Completed in 1868, this new brick building was located on the site of the present courthouse. Boonesboro had won the battle of the courthouse location, but by 1887 Montana (Boone) would become the driving economic and political force in the area when the two towns became a single municipality.

By 1915, a new courthouse was in order. The old brick building was given to the Boone Biblical Ministries, and in June of 1916 it was moved across the street. Employees continued to work in the building as it was moved, and it was reported that “not a drop of ink was spilled.” It continued to function as a courthouse until the new building was ready in 1918.

The cornerstone for the current courthouse was laid on October 1, 1916, and the building was dedicated on May 1, 1918. It is 147 x 81 feet and has four entrances, each on a compass point. Constructed of Vermont gray granite and Bedford limestone, brick, and reinforced concrete, the building is virtually fireproof. Even the interior is built primarily of marble, granite and metal. Only the hand rails on the stairs and some other trim is wood. Cost of construction was $200,000. The building was placed on the National Register of Historic Places in 1981.

*That marker isn’t there any more.
**Where Garfield School was located is now being turned into a housing development by Amanda.

I don’t think that Boone has a particularly pretty courthouse. Especially compared with say the courthouse in Adel or Marshalltown. However, its look has grown on me over the years. It isn’t gorgeous, but it is kind of a standard pretty. 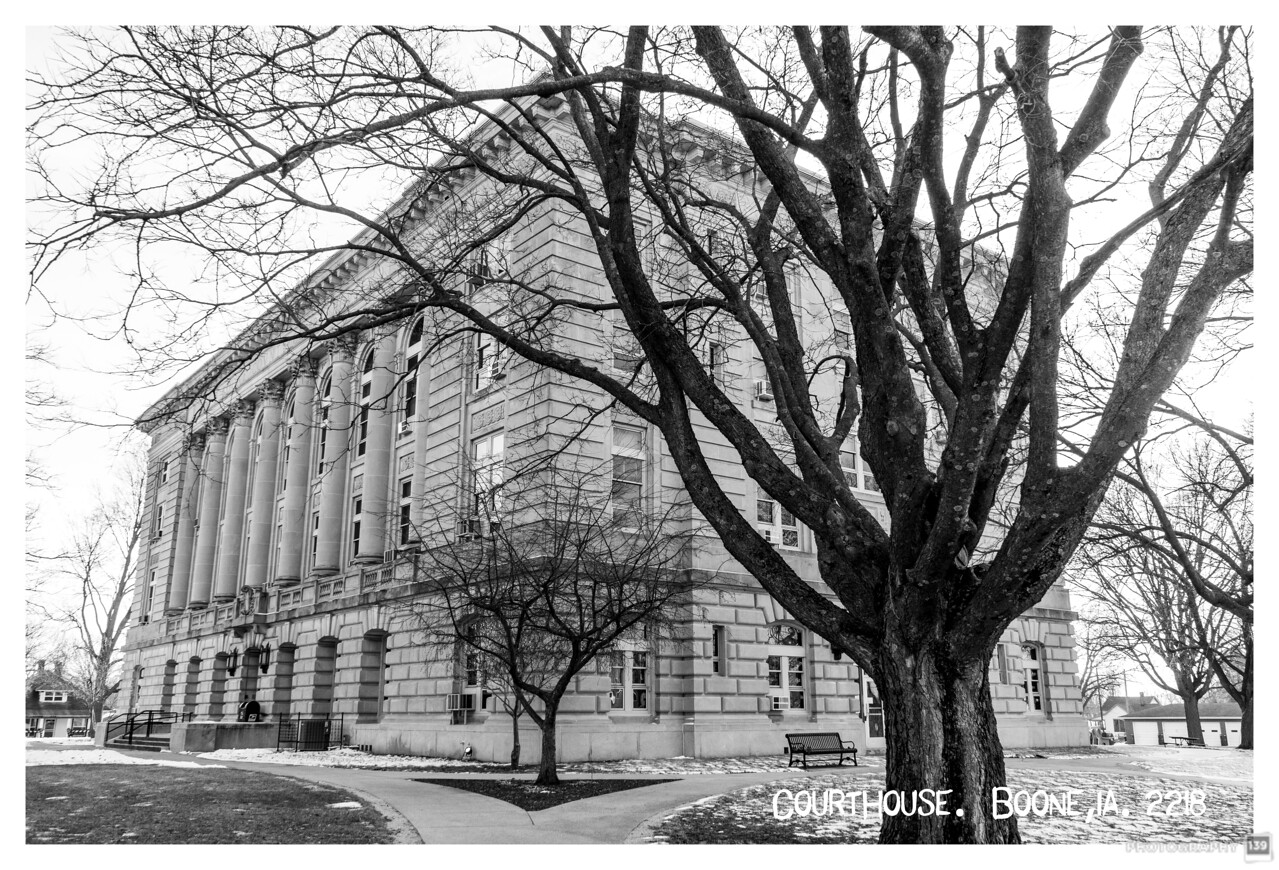 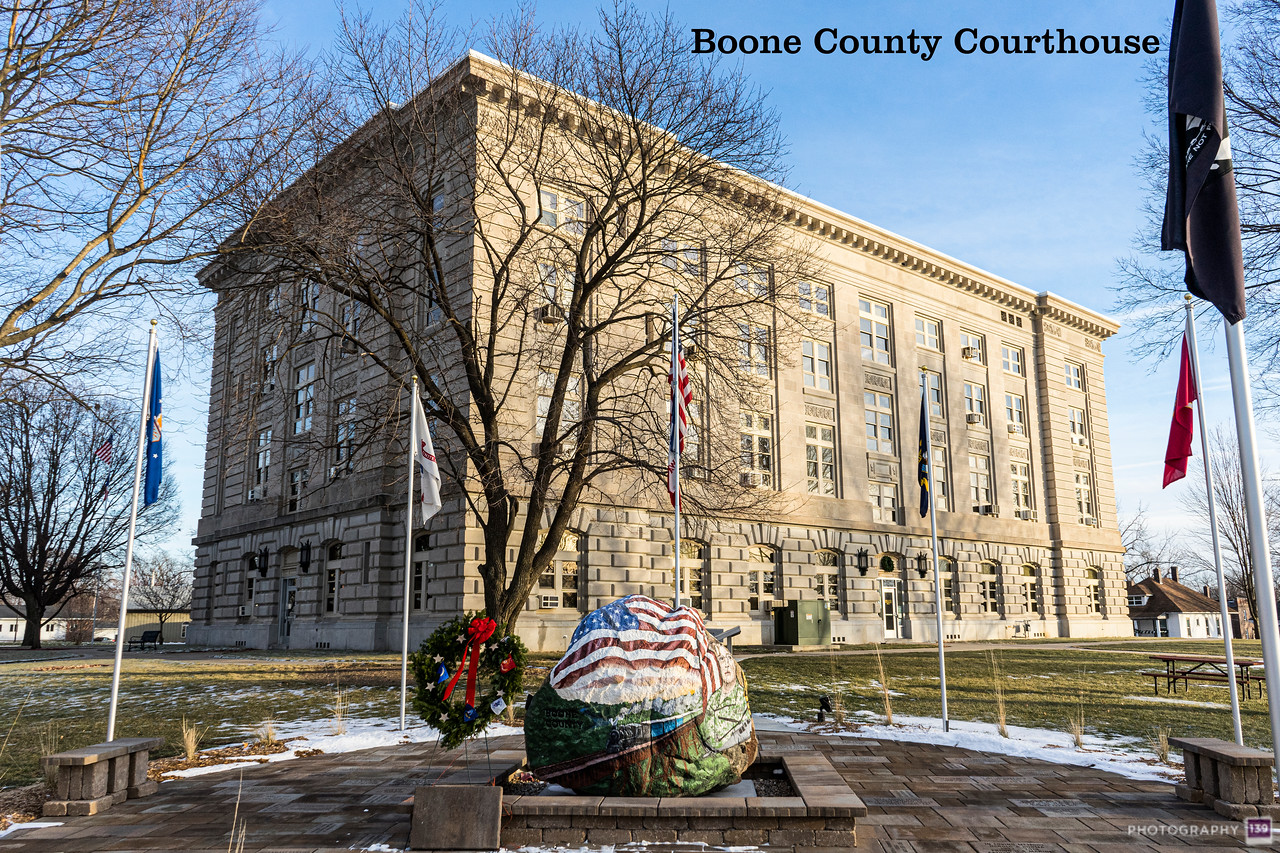 When I did mail-in ballot counting observing, I learned a bit more about the history of the courthouse. There used to be an apartment on the top floor where the groundskeeper lived. They lived there until a lot more recently than you’d expect. The last groundskeeper used to keep a shooting range in the basement.

The next postcard subject will be the Mamie Doud Eisenhower Birthplace.